Dangerous greenhouse gases affect the environment of the planet. These gases hover over the planet absorbing heat from sunlight making our planet ever hotter. This leads to a drastic change in the overall climate of the world. In addition, this change would intensify much more in the near future. Furthermore, it unbalances the whole ecology. When we measure the causes behind this, pollution comes out as the cause number one. Therefore, in order to stop this change scientists and researchers are finding out new ways to eliminate the root cause of pollution that is carbon dioxide. There are many hypothetical methods available for this. However, their practicability is still in question. From all these methods, ocean iron fertilization emerges as one of the more promising ones. Nevertheless, it too has its complications.

What is ocean iron fertilization?

Ocean iron fertilization is one of the various methods of eradicating atmospheric carbon dioxide. In this process, we intentionally seed the ocean with iron that causes phytoplankton or algae to grow. Phytoplankton release an immense amount of oxygen into the atmosphere. However, they are declining at a very rapid pace now.

Late oceanographer, John Martin, found out that iron was the best macronutrient for phytoplankton growth. The algae thus get iron nutrition from the intentional introduction of the element. After that, these aquatic eukaryotic organisms absorb the abundance of carbon dioxide from the air for photosynthesis. The process thereby helps to mitigate a generous share in global warming. 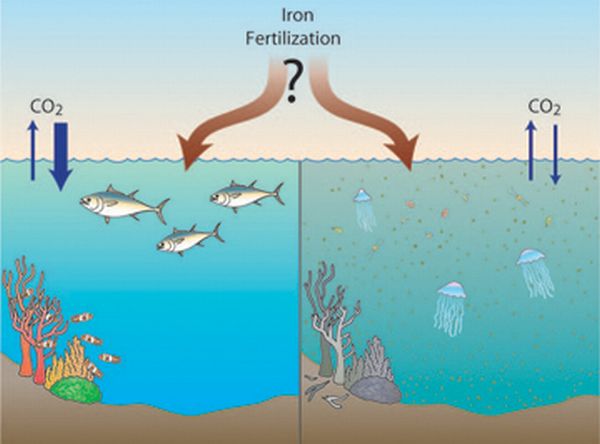 Ocean iron fertilization has a number of benefits. When you release iron particles in the water they feed the algae. These then bloom and absorb the harmful carbon dioxide for carrying out photosynthesis. These tiny pieces of iron then sink in the ocean and lock away the hazardous gas for upcoming years.

The cost estimate for implying this process of ocean seeding to cut on the carbon dioxide is much lower than the present cost of other sequestration mechanisms that we use commercially. The addition of iron will also benefit the marine food chain. Its because iron aquatic plants need iron for their healthy growth. The process of ocean iron fertilization also known as carbon sinking will also enhance the marine biological productivity.

Experiments, which were conducted almost two decades ago on the process of ocean iron fertilization, resulted out in certain drawbacks. The carbon from the atmosphere was pulled into the ocean with less efficiency. But, at this point of time, they want to get back to their research with carefully designed and upgraded technology to come up with positive results.

As for now, the situation is much different. Moreover, scientists want to solve the issues related to global warming in every possible way. Since ocean seeding has led to showing about twenty-five percent reductions in atmospheric CO2, they want to work over every tentative insight of the process and want a fruitful consequence. 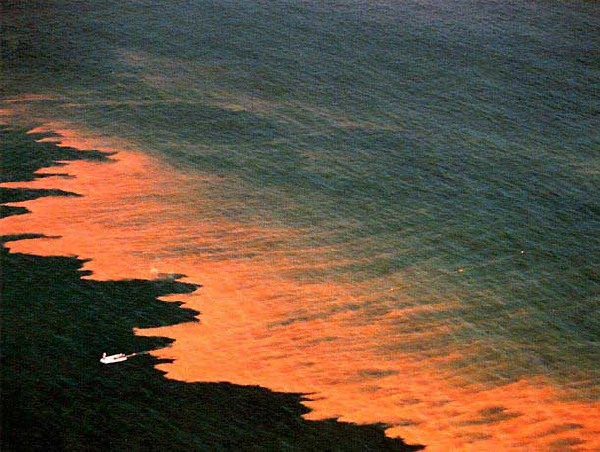 With the process of iron seeding, the plankton growth will be stimulated. This may also mean that algae growth in deep oceans will enhance. But, the requirement of phytoplankton bloom is more on the shore than deep inside. The earlier experiments in reference to the iron fertilization hypothesis pointed out that this method may not be an efficient method to trap and store CO2. Colossal ocean area would have to carry out the process that may be not so practical. The iron seeding can also stimulate the growth of some algae species that give rise to red tides and other toxic acids in the oceans, disturbing the marine ecosystems.

The other various processes that entail cutting of greenhouse gas emissions do not actually promise to end the emanations of CO2 gas any time soon. Or one can say that the plan to cut out the greenhouse gases will not turn back the present trajectory of greenhouse gases. Iron seeding removes the atmospheric carbon dioxide and reverses the process of global warming while other solutions will only slow the process. According to estimates, we would need around two hundred thousand tons/year of iron to restore the lost algae species and will soak around three gigatons/year of CO2. 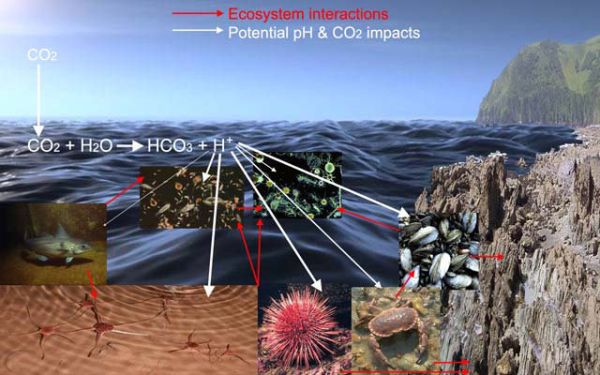 We can disrupt the marine ecosystem by iron seeding. This iron will induce a generous growth in all kinds of phytoplankton, even in ones belonging to genus Pseudonitzschia that produces toxic levels of domoic acid. This acid causes death in various aquatic animals due to which, an unbalance in the ecology of oceans occurs. Secondly, the iron fertilization will lead to lower oxygen levels in the deep seas. When the algae will sink deep in the sea the micro-organism will consume the oxygen of the ocean to raven the algae. Even deep-sea animals will consume oxygen. Therefore, large blooms of planktons would deteriorate the level of oxygen.

The process of iron feeding certainly has the potential to significantly make a change in algae blooms, the aquatic life and perhaps even the environment of the earth. With various low downs of the process, there is a considerable benefit and that is mitigating global warming. We have now realized how oceans can help in cutting down the atmospheric carbon.

With a rise in global warming and a quick need for removal of carbon and other toxic contents from the atmosphere, any promising technique, which promises to execute this demand, would seem great. The iron seeding process anticipates the reverse of global warming, but with certain flaws. With their research on the ocean iron fertilization process scientists may figure out methods to overcome these disadvantages in the coming time.