In the summer months , as the temperatures begin to rise, the use of air-conditioning also rises. This leads to surges in energy demand that the utilities find difficult to handle. In April 2006, for example, there were rolling power cuts in Texas when the summer temperatures were exceptionally high. It is therefore very attractive to think of solutions where the solar radiation could itself be used to cool the home.

Before we start to think of air-conditioning, there are some essential steps that we can take to keep our homes cool that cost very little and use low energy. These include window shades in light or sun reflective colors that are kept closed on east facing windows in the morning and on west facing windows in the afternoon. A ceiling mounted fan helps to circulate air in the room and can reduce room temperatures by 3 to 5 degrees.

Floor mounted or table top fans are less effective but serve to improve comfort to specific areas of the room such as the seating area or the dining area. In areas with dry climate, evaporation cooling as in a “swamp cooler” is effective. In these water is pumped to flow continuously on baffles behind which a fan blows air. The air causes the water to evaporate and the energy that the water takes from the air produces an air-conditioning like effect of cool air flow.

This system would not provide the same comfort in high humidity areas like the ones near a sea coast as the water would not evaporate and the higher humidity will make the conditions even more oppressive. Once these low energy alternatives have been applied,the choice is to look at air-conditioning. Most air-conditioners use a motor operated compressor to compress refrigerant gas, that then expands in the cooler tubes over which a fan blows air.

This cool air circulates through the home. Present day air-conditioners are far more energy efficient than the ones made earlier but it is important to remember that heating and cooling accounts for around 50% of all energy usage in our homes. Solar air-conditioning is the collective term for any system that uses solar energy in place of utility power to cool our homes. The US Energy Independence and Security Act of 2007 provides funding to support the development of solar air-conditioning and a wide range of new products are being developed that could increase options for us to using utility powered air-conditioning.

1. University of Colorado students make ice from the sun 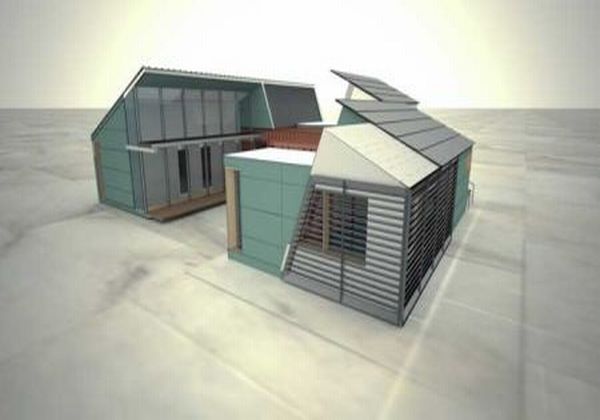 In a concept demonstrated at the Solar Decathlon 2007, a team of students showed that this 1400 square foot home could be fitted with 8.8KW photovoltaic panels on the roof to produce electricity. In addition the solar energy heats water in the tanks on the roof. In the winter, this hot water is pumped through radiator coils to heat the home. The hot water storage is enough in volume to serve water circulation through the night when the water is not being heated by solar energy. In the summer, the hot water is used to operate an evaporation cooling system that cools the air.

The water tank on the roof serves the additional benefit of keeping the house cooler in the summer. Actual ice-making from the sun, by the way, has been done by a team from the University of San Jose, where a curved solar reflector directs energy on a tube filled with refrigerant to produce ice. 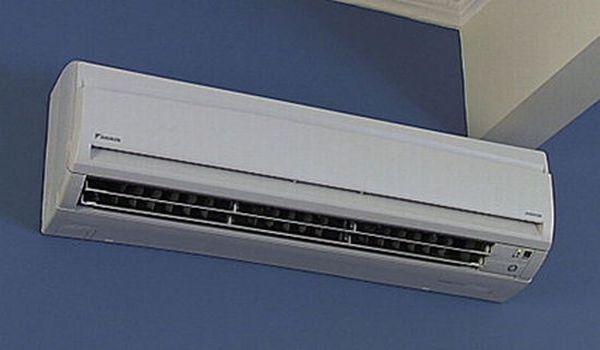 The simple application for solar powered air-conditioning would be produce electricity from solar photovoltaic panels that could drive a conventional compressor operated air-conditioner. A typical one ton capacity air-conditioner to cool a 12 foot by 12 foot room would need about 1.5KW of power.

The more advanced application would be to use vapor absorption cooling where the solar energy heats water that serves as the heat source to drive the cooling system. Solar heating of water has the limitation that the water could only be heated to about 70 degree C temperature whereas the absorption chiller needs it to be about 88 degree C. This would need supplementary heating by utility power. 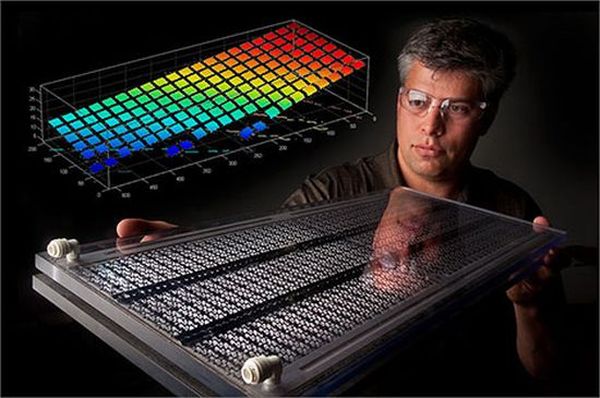 The National Renewable Energy Laboratories( NREL ) in 2010 announced the development of a new air-conditioning system that is a major advance over the evaporation “swamp cooler”. They have named it DEVap for Dessicant Enhanced Evaporative cooling. As the name suggests, the advance is to use dessicants to remove water vapor from the air before it is cooled. This will permit the evaporative coolers to be used even in humid climates. A dessicant is a material that absorbs water vapor and has been used in industrial applications. It is also the material in the small sachets that we find inside electronic appliances that we buy to keep them humidity free.

NREL uses highly concentrated lithium chloride or calcium chloride salt solutions as the dessicant. These are used with thin membranes that cause the water vapor in the air to deposit as droplets on the surface of the membranes. The dehumidified air is then cooled in the evaporative cooling process. In the picture above, the red patches are the hot humid air that changes into the blue patches representing cool, dry air. Since the “swamp cooler” uses 50% to 90% less energy than a conventional air-conditioner, this new development that overcomes the limitations of evaporative cooling in humid climates is an important forward step in the adoption of energy efficient air-conditioning. 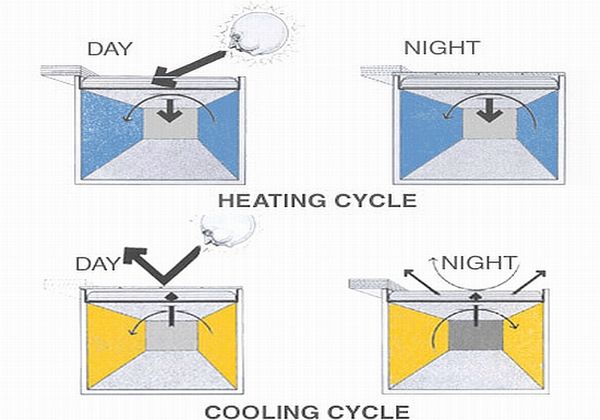 Harold Hay proposed a simple roof pond system to heat and cool a house without electricity in the 1960s. He built a house in California to demonstrate his concept. The idea is stunningly simple. The house has a corrugated metal roof on which plastic bags filled with water are placed. The water is typically 4 to 10 inches deep.

In the winter, when the house needs heating, the insulated roof is kept open for the solar heat to warm the water that then transfers heat to the metal roof. In the night , the insulated roof is closed to retain heat in the water. Hay’s concept uses the heat absorption capacity of water. Initially this was dismissed as a crank idea but subsequently, other researchers have found the roof pond a viable solution. 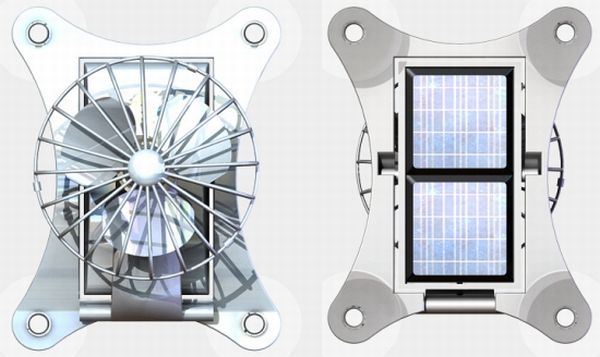 The solar fan by Stuart James Sharples, a Birmingham, UK based inventor is a small fan to use inside a car or in your office or home as a personal cooling device. The fan has a built-in photovoltaic panel and has four suction cups that enables it to be stuck on a window pane or other surface that can catch the sun. The fan itself is mounted on a neck that can be tilted to diect the air stream.

The three approaches to cooling the home in summer can be described as passive cooling, solar thermal cooling and photovoltaic cooling. The passive cooling methods include the common sense first steps that need to be taken such as using sun shades , using trees or plants , use of heat reflective paints or tiles and so on.

The solar thermal cooling methods include the “swamp cooler” and the more innovative ideas like the roof pond. The photovoltaic cooling , of course, uses solar energy to produce electricity to run conventional air conditioning equipment. Since heating and cooling accounts for some 50% of energy usage in the home, it needs all the attention it can get.

The adoption of passive cooling and solar thermal cooling into the design of the home will ensure that for several months of the year (except for the peak summer months) the use of energy intensive air-conditioning can be avoided or reduced. These measures need to be built into the design of houses so that the cost is lower than having to retrofit these on houses that have been built without considering these options.

The sun is a source of clean energy that can provide us with all the energy we need for our cooling needs. The adoption of energy efficient cooling methods will not just reduce our energy bills but also save on the utilities having to add capacity as “stand by” to provide for continuity of service for the peak demand days. These stand-by capacities besides being capital intensive , often burn fossil fuel that adds to the greenhouse effect. The adoption of solar energy for our cooling needs will be an important step towards controlling our carbon emissions.