Have you heard of a ‘sculpture with a purpose’? Well, if you did, then here are a few sculptures that give the true definition to this phrase. These creative sculptures not only have the futuristic look, in addition, they also generate electricity. Furthermore, they do so utilizing one of the most eco-friendly forms of energy, i.e. solar energy. Here are some designers that have come up with creative sculptures that are designed to run on solar energy. In fact, these are some of the best solar powered sculptures after the jump. 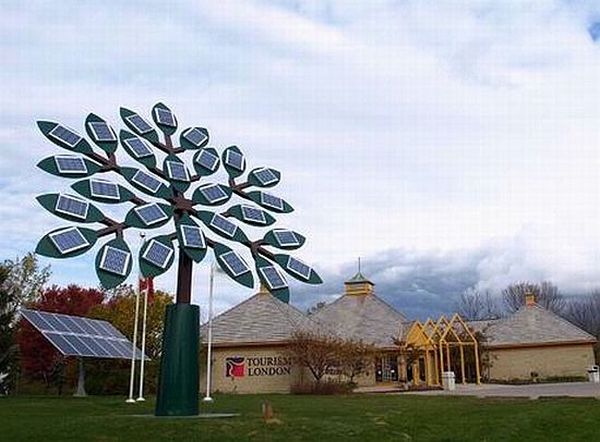 The office of Tourism London has made an effort to rely upon the power produced by renewable sources rather depending upon the grid electricity. For this, they have developed the world’s largest solar tree that produces around 8.6 KW of green electricity. The solar tree is 22-foot tall and is a visual landmark of London. It is making people aware of the importance of implying clean and green sources of energy.

The solar tree has a total of 27 leaves, each integrated with solar panels to generate eco-friendly electricity. The entire project will produce around half of the electricity consumed in the office per year. This is approximately 10,000 KWh of green power annually. Furthermore, this system will also eliminate about 10 tons of carbon dioxide. This would otherwise add to the environment by fossil fuel power plants. 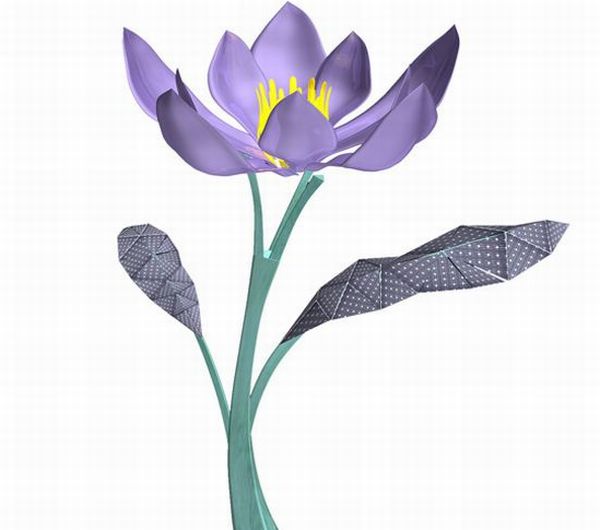 In botanical terms, heliotropism is described as the periodic movement of the parts of plants, specifically the flowers and leaves that occur every day in stimulus to the sun. Inspired by this botanical phenomenon, Beth Deutch and Larry Rubin have designed an elegant solar powered kinetic sculpture. This sculpture is called as ‘Heliotropis’.

This beautiful 10-foot tall flower sculpture features built-in solar panels. In fact, it would collect the sun’s energy during the day. This, ultimately, is used to bloom the glass petals in the morning and to power the LED. It allows the plant to stand as a light fixture at night.

The kinetic solar sculpture is planted in Rumson, in the garden of the designer couple. Moreover, the eco-conscious designers have focused on the aesthetics of their creation by making use of solar panels in the ceramic and glass petals and have tried to aware people about the issues related to greenhouse gas emissions through their ecologic design. 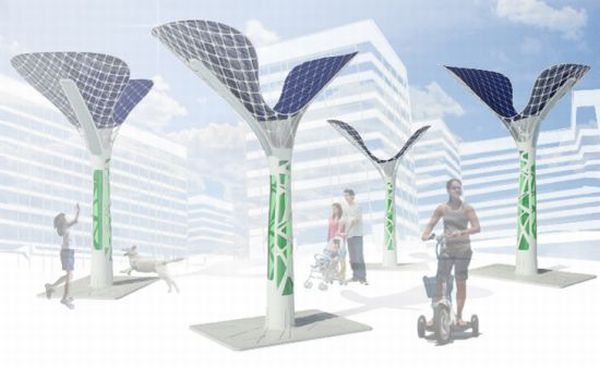 The WARP abbreviation for water and air recycling pad is the brainchild of Portuguese designer Vasco Pinto Alves. His concept is truly inspired from the nature. The solar tree that he has created makes use of solar energy to generate green electricity, provide shade and clean CO2 free air, just like a natural tree does. The entire tree is covered with photovoltaic panels to produce renewable electricity without harming the environment.

However, a water collector is also retrofitted to collect and purify the rain water, which can be further supplied to households.Seasonal algae are also made to grow in the system that absorbs the environmental CO2, which clarifies air and further manufactures bio diesel.

Four algae aquaria are included in a single structure. The green electricity is used to illuminate the set of LEDs at dark and also to power the electric vehicles that are parked below the solar structure. 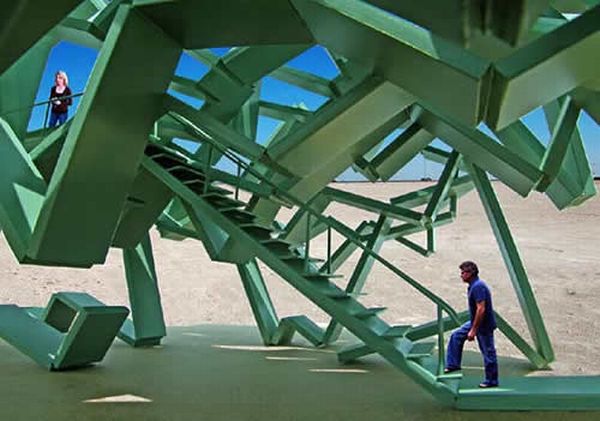 Renowned American artist and designer Michael Jantzen has created this amazing solar energy field sculpture. This eye-catching sculpture is a huge 3D desert installation that takes energy from the sun and converts it into electricity for the surrounding areas. The solar panels located on the southern side are spread over with a photovoltaic film that is operated under extremely high temperature. O

n a clear sunny day, approximately 10,000 watts of green electricity is generated to be supplied to the local community. The visitors can sit or lie under the shade of the lower panels as they are folded out in different ways. The surrounding landscape can also be viewed by climbing up the solar energy field. 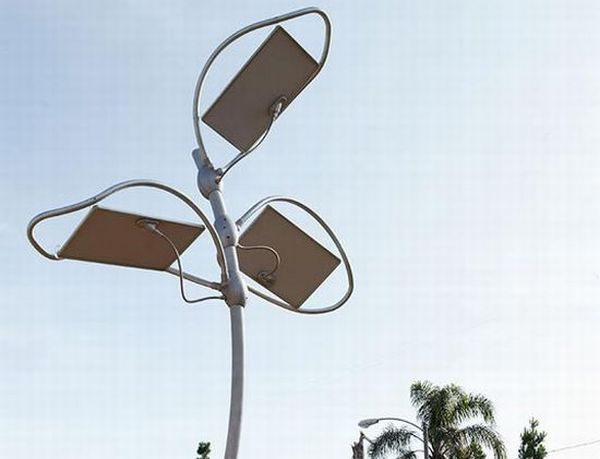 Long Beach, California based Nectar Design’s founder, Darren Saravis, has created the ‘solar flora’ by making use of aircraft aluminum and some locally produced materials. In addition, the elegant and stylish design of solar flora pays tribute to the nature’s beauty and charm. Nevertheless, this sculpture is fully functional, generating green electricity by capturing the sun rays.

The sculpture looks like a giant flower with one, two, three or four solar panels integrated on the petals. Moreover, the PV panels have a tendency to generate about 1.2 kilowatt-hours of electricity per day, depending on leaf configurations. These artistic sculptures can add to the ambiance of a garden, shopping mall, museums, etc., and also provide efficient green energy to these areas. 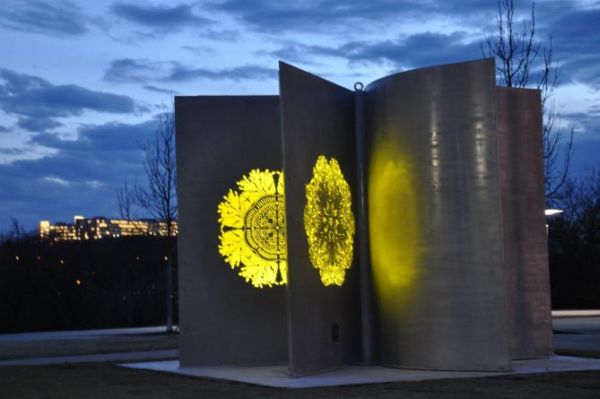 Alabama artist, Deedee Morrison was inspired to create the 8 by 12 ft art piece from the drawings of Ernst Haeckel, who was very appreciative of various organic forms. Furthermore, Haeckel was also responsible for discovering and illustrating thousands of new species.

Morrison is interested in interpreting nature in her art pieces. In addition, the color scheme of her sculpture exudes the vibrant aura of the sun. The yellow hues shine through the three alternating intricate designs carved into the metal surface.

Additionally, the artist’s distinct signature style is noticeable in the sculpture. Morisson is recognized for creating large-scale art pieces out of ‘masculine’ defined materials such as aluminum, steel, and limestone. She is enthusiastic about the contrast between metal and nature.

According to her, steel is considered inorganic and inflexible as opposed to her nature-inspired design. She focused on balance between the two. The feminine, delicate designs juxtaposed against the heavy material compose a very fascinating concept.

The conversion capability of the sculpture in the lush environment makes a statement in favor of solar energy. Part of the sculpture is a 125W solar panel that converts sunlight into usable energy, which is then transferred through the charge controller to the battery bank. The charge controller reduces the energy as the battery only requires 12 volts to charge and the energy is stored until needed. An 18-foot solar tower near the sculpture can power the art piece with stored energy for 14 continuous hours.

With the ever-increasing environmental awareness, design houses and architects from around the globe are looking for new and innovative ways to give an eco-friendly touch to their creations. Every other day, we get to see and hear of amazing examples of solar energy. In fact, these ultimately integrate into residential, commercial and industrial applications. Furthermore, the efforts are on to exploit solar power in every possible way for the benefit of Mother Nature and the human race.