As sustainability as a trend is becoming more popular, so are the green innovative ideas. You just have to check out the news. There’s a mind-boggling green innovation coming out almost every day. In fact, even river or water transportation isn’t untouched by this boom. Old noisy fossil fuel boats are a thing of the past. Green boats have taken their place. Now you have solar electric powered boats like Aequus 7.0 in the market. You can just unleash them onto the ocean without being worried about the fuel as the sun is all they need. 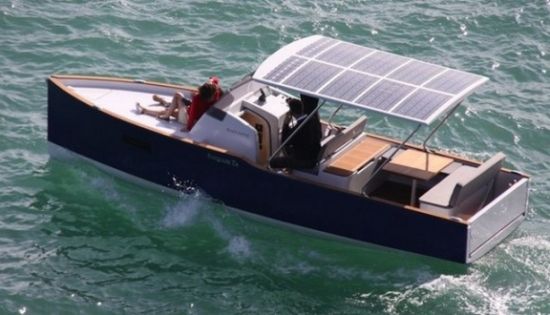 With an aim to develop a family pleasure boat that didn’t pollute the ecosystem and didn’t emit any noise, Aequus Boats has unveiled the Aequus 7.0 solar-electric boat that isn’t subservient to the whims of the wind or the waves. The boat was designed after testing some 18 hull design in a digital wave tank and the end product can house a galley equipped with refrigerator and running fresh water. 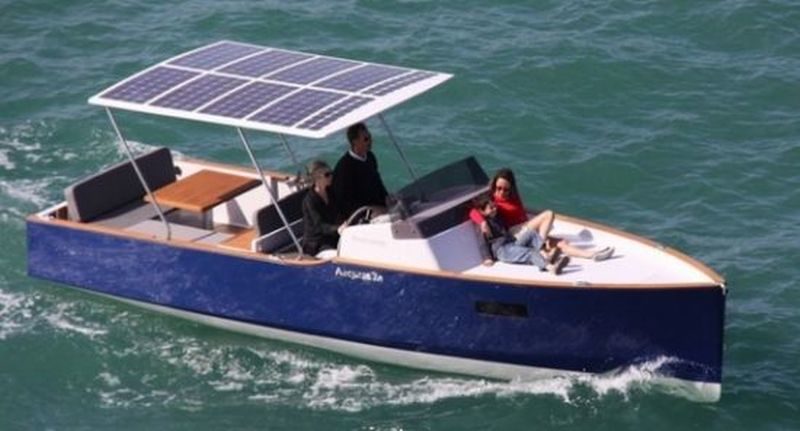 With double berths, the Aequus 7.0 can accommodate up to seven people and includes a shower and a fully functional toilet with wastewater tank. The boat is propelled by a combination of solar panels embedded in the retractable canopy, which also charge onboard AGM lead acid batteries to provide up to 8 hours of cruising time even without solar assist. 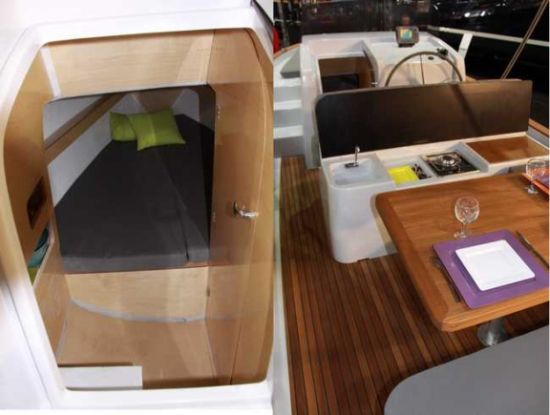 Propulsion comes from a 4KW synchronous brushless motor, which helps the boat accelerate to a top speed of 7 knots. The basic configuration of the Aequus 7.0 costs about $70,607 and the boat can be customized to add a teak cockpit floor, additional batteries, electric windlass and a custom trailer.

Developed by a Taiwanese company named Horizon Yachts, the SunCat23 Catamaran uses solar energy to fulfill its energy needs. The solar panels fitted on top of the boat are capable of generating 760 watts of energy which, in turn, powers a 2.8 kW electric motor. This gives the SunCat23 a top speed of 6 knots and the ability to carry 12 passengers onboard.

The Solar Proa catamaran uses energy from the ray of sun to power itself. The boat has been designed by a team of designers which includes the likes of Carolin Dissmann, Daniel Boos, Andreas Schwab, and Tibor Bartholoma. Solar PV panels cover the top, front and the rear of the boat. The boat is capable of taking six people for a peaceful ride on the river.

The Solar powered yacht concept by Novague Studio is unique in the sense that the solar panels fitted on the boat spread out on both sides like the wings of a plane. The panels transform sun’s rays into electricity that powers the electric motor that the boat runs on.

Designed by Demetrius Tanase, the Poseidon solar yacht concept combines comfort and eco-consciousness in the most perfect manner. The Poseidon is a 12 meter long boat that uses solar energy to fulfill its electricity needs. The solar panels that transforms sun’s rays into usable electricity has been fitted on the sails of the boat. The designer of the boat has used extremely thin solar films so that they can be fitted on the sails. The design of the yacht has been done in a manner that would reduce drag and increase energy efficiency.

The Volitan boat concept harnesses both solar and wind energy to fulfill its energy needs. That is why, the boat has been fitted with solid sails and double-layered solar panels. The body of the boat has been made from carbon fiber composites and epoxy resin which makes the boat incredibly light and stiff. The solar panels on the Volitan have been fitted on two wings which rise vertically from the top of the boat. Electricity generated by the solar panels is used to drive a pair of 222 HP electric motors.

The pedal-powered boat has been conceived by Jonathan Mahieddine. The primary energy that the boat is powered by comes from the people taking a ride in it. It is a pedal boat. But whenever the occupants get tired of peddling, there is a battery pack fitted on the boat which takes over the job of powering it. To provide electricity to the battery, the boat has been equipped with solar panels that are fitted on top of a pole that rises from the middle of the boat.

The hybrid boat concept from Mercury Marine uses both solar energy and fossil fuel to meet its energy requirements. Equipped with a pair of QSC 550 HP diesel engine and a lithium-ion battery pack, this ‘green’ boat concept does show some potential as far as the future boat market is concerned. The lithium-ion battery pack gets electricity from the solar panels fitted on top of the boat.

The design team of one of the most successful green cars in the world, the Aptera, has now conceived a boat which uses solar energy to power itself. They call it the Loon. The boat comes fitted with a solar panel. It is capable of generating 1000 watts of clean energy from the rays of the sun. That energy is used to power an all-electric motor. It gives the Loon a top speed of 7 knots and a range of almost 35 miles.

The Leviathan green yacht concept uses both the sun and the wind to give its occupants a green ride. The concept has been created by industrial designer Adam Valmassoi. He believes the future of transportation lies in using green energy. The boat runs on a pair of electric jet pump engines. These get their energy from the solar panels and the wind turbines fitted on the boat. 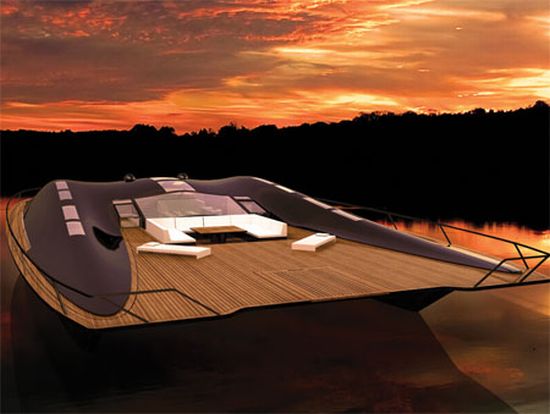 If the rise in the average temperature of the planet continues as it is today, the future will see major cities flooded as a result of which civilization might seek floating shelters. Industrial designer Janne Leppänen is getting prepared with a concept boat called the ARKKI.

The ARKKI features a huge open space with a surface like that of an indoor basketball court. The entire surface of the boat is covered with multilayer photovoltaic cells that can produce the required energy from the sun to power the boat.

The concept features a concrete hull that is reinforced with plastic fibers, making the boat stable and rigid enough to be used in the winter season as well. Other parts of the boat are to be crafted from natural fiber composite materials.