If you think plastic a pollution is only conquering the land, thing again. Not only it is as prominent in the oceans, in addition, because of the connectivity of the oceans, it is causing much more harm there. Add to this, the threat of microplastics, and the situation becomes much more severe. However, although plastics are even present in deepest ocean trenches, it is mostly accumulated in huge patches. By cleaning these ocean garbage patches, we can control ocean plastic pollution as well. Therefore, let’s take a look at some of the innovative plans that could help reduce plastic pollution in the oceans. 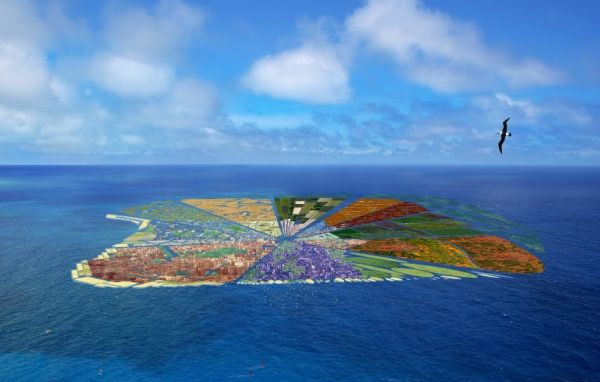 This beautiful island is a research project proposed by Dutch architect Ramon Knoester. The ‘recycled island’, as it is aptly called, is situated between Hawaii and San Francisco in the Pacific Ocean. The project is aimed to create a habitable area using the oceanic debris. This includes plastic waste, cleaning the oceans vividly. Moreover, by doing this the waste plastic will be converted from rubbish to a constructing material.

The Hawaii sized recycled island won’t be depending on other countries for resources needed to survive. However, it will have its own food and energy resources, generating power from the sun and wind.

The floating island is self-sufficient and non-polluting. Furthermore, it is in harmony with the environment. Therefore, it would not disturb the global ecology. The sustainable island will be developed with all sorts of modern lifestyle with mingled usage of environments. The idea is purely green and ambitious. However, the obstacles like time span and the cost for giving the proposal an actual shape, cannot be ruled out. 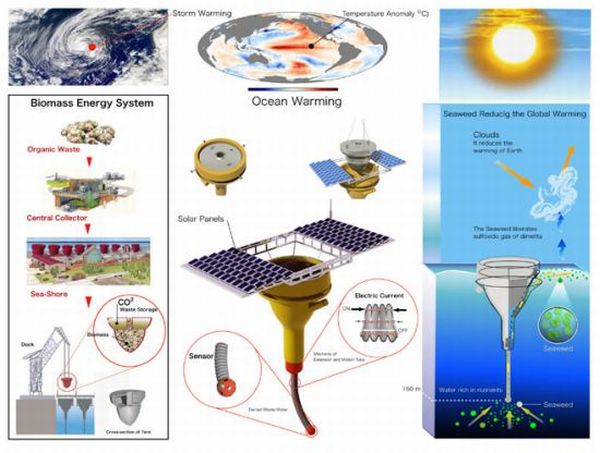 The Eco mobile robot, designed by Ejiuson Ueda, is an advanced system. It is created to clear up the garbage from all the oceans of the world. These floating platforms aim to acquire an international group action to be performed. It would be required in case of aquaculture as well as to minimize the temperature increase of the oceans. In fact, this would further render to an increase in the water level. These floating buoys might look similar to oil rigs but work in quite a dissimilar way.

The eco mobile robots consist of a sensor to canvas the quality of the water. In addition, it also has powerful pumps that suck up the plastic dump and toxins from within the deep regions below water. Clean and non toxic saline water is released back to the ocean. The dangerous waste materials are collected in a special container and dumped in a safe and suitable place.

The Eco Mobile Robot is connected to the satellites all around the world and the site that needs to be treated immediately is monitored. The innovative system will help the marine life to get a cleaner environment for survival, making the oceans non toxic. 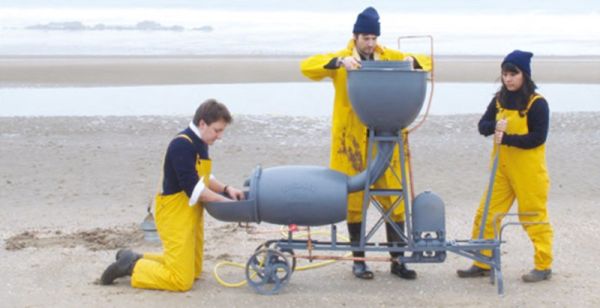 Plastic waste contamination is one of the major issues today. Although the waste systems clear up the apparent plastic from the ocean surface, the nurdles, often called as mermaid tears, can be found on almost every shoreline. These nurdles that resemble fish eggs are consumed by other marine creatures, which are killed due to plastic ingestion. Kieran Jones, Azusa Murakami, Alexander Groves, a graduate team of Royal College of Art, UK has come up with ‘the Sea chair project’ that turns out to resolve the marine contamination trouble.

These designers propose to convert an old fishing trawler into a fully functioning chair making factory where the plastic nurdles are collected and are then separated by their size. The plastic nurdles that are found floating every square mile of an ocean, is either leaked from factory storage or spilled during transit. These small granules of virgin materials will be collected and used to make plastic sea chairs. 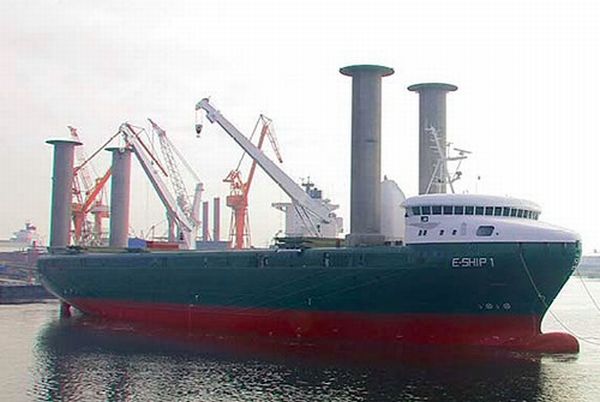 The purpose of creating these unmanned ships is to collect the plastic litter in the North Pacific Ocean. These automated ships are powered by solar and wind energy, along with the bio fuels. The ship is navigated using GPS technology. Two sets of rotating, lightweight but firm paddle wheels are designed to collect the plastic waste. While the front paddles collect the large waste, the rear one collects the smaller granules. The debris collected by the maintenance ships can be recycled on the mainland.

These innovations might help in collecting the plastic waste, however, recycling that plastic and using it for better purposes is also important. Otherwise, that plastic would end up somewhere else as waste. So check out these three inventions that convert waste plastic into something useful.

3 – Machines that convert ocean plastic into something useful

Every home faces the problem of plastic waste and taking it to the recycling center each time is not very feasible. In an attempt to address the issue of plastic waste, Akinori Ito has designed an ingenious machine that converts plastic waste back into usable oil. Christened the “Blest machine”, this safe, clean and most user-friendly machine make use of a temperature-controlling electric heater to bid goodbye to the plastic, making the planet a better place to live.

The compact Blest machine uses an electric heater and melts the plastic without releasing CO2 or other toxins. The fuel produced from the plastic conversion process can be put to use immediately for stoves and generators, or can be further refined to be used as gasoline to power vehicles. The machine not only allows the users to convert their everyday waste into something more meaningful, but also encourages people to take up green practices like recycling, diverting waste from landfills. 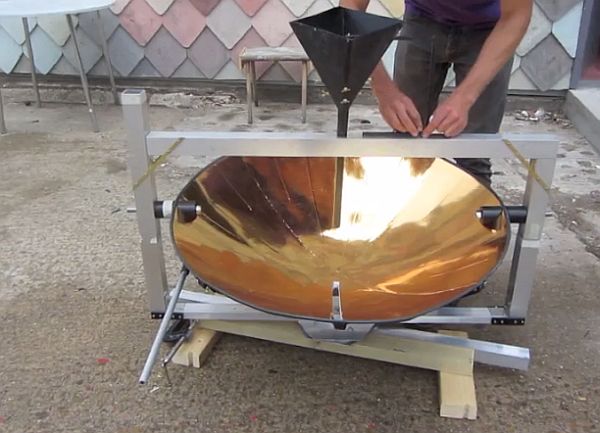 In order to ease things up a bit and to clean up this gigantic mess, Studio Swine, a design studio nestled in London has come up with a superb design concept of a solar-powered 3D printer. Alexander Groves and Azusa Murakami run this design studio and their mission to convert plastic garbage into furniture started in Cornwall, UK. They collected some plastic rubbish from the shore, built their own shredding and extrusion machine to create filament. Thereafter, they used the filament to print a three-legged chair, which they named the Sea Chair.

It can melt massive amounts of plastic by using solar power, so it is an eco-friendly project. This design helped them take their 3D printing operation to new heights. If all goes well and they manage to receive required amount of funding from Kickstarter, this October the designers will travel to one of the largest sources of recyclable plastic in the world with their new machine on the Sea Dragon.

The Sea Dragon is a steel hull sailing vessel that is 72-foot long. It was built in the year 2000 in UK for a competition, but then it was redesigned. Today, the Sea Dragon is fully equipped sailing vessel including a laboratory, dissecting microscopes, and a surface net trawling capacity. The ship goes on regular expeditions to explore plastic garbage in sea, and this October, the designers of the Sea Chair have a chance to the North Atlantic Gyre on the Sea Dragon.

3. The machine that turns plastic into bricks 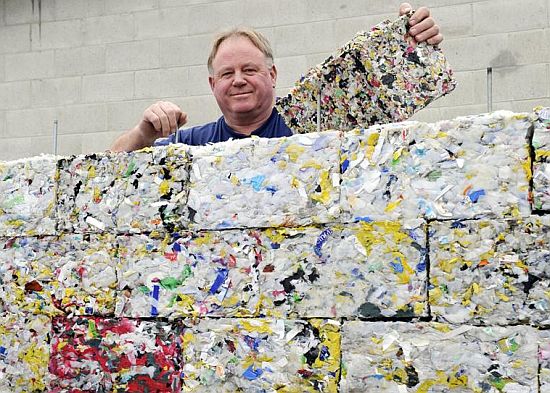 Dunedin man Peter Lewis has created a unique machine that transforms discarded plastic into building blocks of a multimillion-dollar business. Christened the Byfusion, the machine turns raw plastic into compacted bricks that can be used for garden retaining or landscaping walls.

The plastics from drink bottles and packaging boxes goes into the machine, which washes, dries and compacts the plastic to convert it into 10kg bricks in just 45 seconds. The developer is also considering using the bricks to build hurricane and tsunami shelters in the Pacific Islands or create cheaper sustainable housing in places where wood is scarce.

Humans have been discarding waste into the water bodies for ages. Over the years, plastic pollution in our oceans has become one of the major environmental problems. The marine debris is creating the unsightly beach litter. Moreover, it also poses a serious threat to marine life and coastal habitation. The major problem is due to the range of plastics that do not biodegrade. Therefore, it is necessary that we not only collect plastic waste, but by recycling it also put it to good use.