Green sources of energy have fascinated and occupied man for a few decades now and the efforts in the direction of obtaining energy from non-conventional sources have been laudatory. The energy from the sun especially needs mention here for it is infinite and inexhaustible apart from being freely available. The E-Vine is a concept that utilizes solar energy to generate electricity to power automobiles. We can safely make the assumption that the time is not far away when all our automobiles will be powered by electricity rather than by fossil fuels. For such times, the E-Vine not only provides a utility power charging station but also does the same in a visually green manner too! 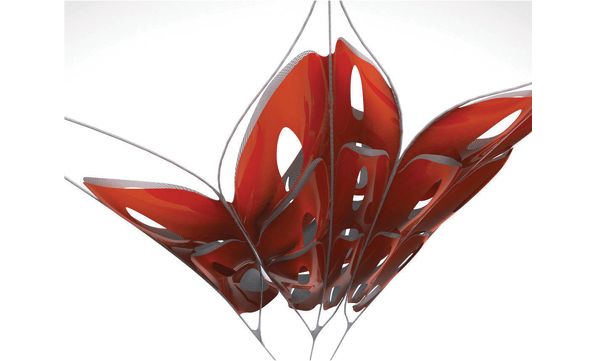 The E-Vine has been designed as a cluster of nodes that can charge multiple vehicles at a time. It consists of two sections – the Leaf and the Charge Pad. The Leaf is the canopy that will spread across posts, buildings or any vacant space. The canopy is loaded with solar panels that continually convert the solar energy into electrical energy to be stored in the elaborate battery system supporting the E-Vine. The Charge Pads are stations where the electric cars can dock in for a power recharge. The power is drawn from the batteries and used for a quick recharge of the vehicles.

And now comes the beauty and elegance of designing. The Leaf has been designed in the shape of leaves overhanging from a green canopy! It can also be configured as a standalone umbrella or a trapeze structure. The name, E-Vine, says it all. It extends along the sidewalks and curbs, lending a natural look and feel to the environment too. The Charge Pad also has “plug-in” programs like laptop chargers, cellphone chargers and digital information kiosks built in for utilization while the car is being charged.

The whole idea of the E-Vine is to build a synthetic organism that will just be life short of living! It will conglomerate into a network of power fields for harvesting solar energy across large areas so that it can serve the needs of many vehicles. The plan is to build many other complimentary programs like games, videos and the like to also engage the passers by. These will keep the occupants of the car occupied during the recharge.

These panels filled with photo voltaic cells could also double up as advertisement holders and hoardings if necessary. Though such solar-energy harvesting grids have been conceptualized before, the idea here is to make the E-Vine look as natural as possible. It will stand alongside the photosynthesizing trees and plants and carry out its own ‘photo’ synthesis!