Nowadays, architecture firms are trying their best to address the environmental concerns and the urban needs by incorporating eco friendly elements into their projects. Enter the Indigo Tower, a high-rise tower design by Hong Kong-based architecture firm “10 Design” that aims to tackle the burning issue of urban pollution by purifying the air of our cities. The Indigo Tower does the same by taking out dirt, grease and bacteria out of the polluted air and leaves just oxygen and water behind. The whole reaction is activated by the nano coating of titanium dioxide (TiO2) done on the tower’s outer skin. While the reaction is triggered simply the sunlight falling on the titanium dioxide during the daytime, the solar powered UV lights takes care of the reaction during the night. 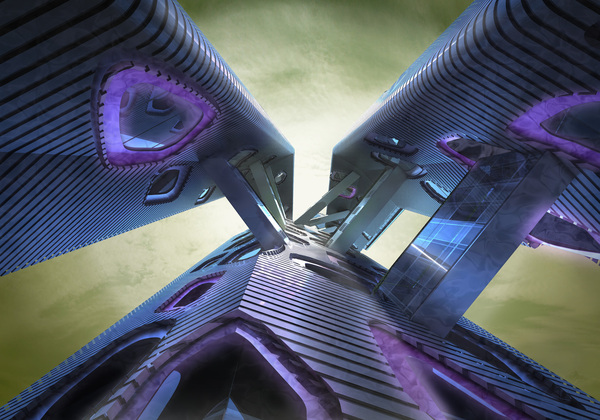 During the night, the tower will be a glowing indigo object, the intensity of which varies accordingly with the quantity of solar energy collected by the photovoltaic panels integrated onto the tower. The cleansing of air will be symbolized by the indigo glow, which balances the yellow haze that prevails over the cities during the day. To add to the surface area, providing southern light to the south faces and focussing as well as increasing the speed of winds, the entire structure is divided into three bars. The increased surface area will enhance the use of titanium dioxide thus resulting into a larger extent of clean air.

The focussed and increased wind velocity will let a big amount of air to be pushed across the titanium dioxide panels and will also render cross ventilation for every section of the tower. These focussed winds will also power an orderly placed set of vertical wind turbines. A positive air pressure is created on the southern facades of the tower while the northern face confronts a negative pressure; therefore desirable conditions for cross ventilation are created. The backflow of air has been carefully precluded. The skin of the tower is designed by getting an inspiration from the pocketed and cellular texture of the titanium dioxide molecule.

The structure is entirely covered by a set of organic cells that are tapered to collect the by product of the skin’s chemical reaction that is water and also gather the rainwater. To ensure natural shading and increase the daylight respectively, the tower skin gets off from the tower on the south side and pushes into the inner skin of the north front. At regular intervals while moving up the tower, various gardens are located where people gather to relax and breathe in fresh air. Water that is gathered by the chemical by product and rain is filtered and processed to be used by the public.

At the base of the tower is a large pool that collects the filtered water that is used for the flora and fauna. This water is also pumped back to the tower to be used in service toilets. The small amount of carbon dioxide that is also produced by the chemical reaction of the skin is reverted to breathable oxygen by the green plants of the garden.

Sustainable architectural designs, like the air purifying Indigo Tower, are the need of the hour to address the ever-increasing environmental issues and the pollution problem in the urban areas.