Off-grid homes are truly the homes of the future. Combine with a home that does not need external sources for water, and your house is completely autonomous. This means they have their own water supply lines and sewer components, generate their own electricity and even incorporate various indigenous yet sustainable sources for habitation. In short, they tend to eschew any kind of public utility service, thereby embodying the true sylvan side of living. In fact, your house could also be carbon positive that is it might contribute positively to the environment. Straw Bale Home and other housing ideas in this article show us leap of concepts that would help us in reaching these higher ideals.

Living in the wild desert, where temperatures vary between extremes is a challenging task, and to uniquely suit the circumstances, Edge Architects from Taos, New Mexico, has designed a high desert home that will make living in the desert not only more convenient but also greener. This house supposedly runs off-grid and is completely self-sufficient.

The outer walls of the house, including the north, west and eastern walls. All have straw bales with a thickness of 24 inches. This unusual thickness of the walls prevents them from heating quickly, thereby, keeping the inside temperatures at bay, while the outside temperatures keep fluctuating. For quickly exhausting hot air inside, one can open the skylight at the top of the stairway. During winters, the suns heat penetrates deep inside the house. In addition, the floor and interior walls absorb it. They will retain it and keep the house warm during the evenings. 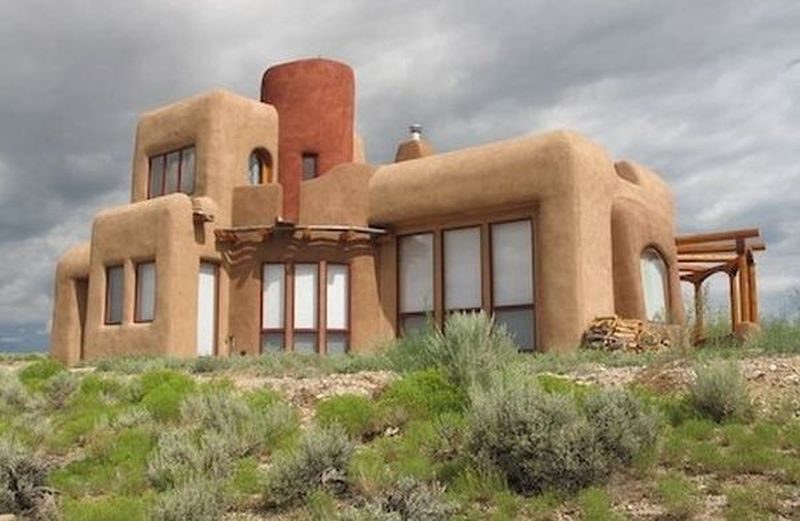 One good attribute that the desert hinges on is that it gets almost 300 days of sun and for harnessing the solar power effectively. You have to install photovoltaic panels close to the utility room. This room has a bank of batteries that stores electricity and also an inverter that is capable of converting 24 volt DC electricity into a 110 volt AC power.

The idiosyncratic renderings by the greenhouse are numerous. Furthermore, every corner of it is full of green technology. The water supply works in harmony with a rainwater roof catchment system. Moreover, in demand heaters provide hot water. Furthermore, energy efficient appliances are present throughout the house. Lastly, it goes on to include countertops made out of recycled glass, bamboo flooring, etc.

Getting respite from the scorching temperatures of the desert and enjoying its wilderness isn’t that difficult anymore. In addition, you would also be relishing all the comforts that too without compromising on the greenness. All thanks to firms like Edge Architects, who are upbeat about giving new dimensions to sustainable living. 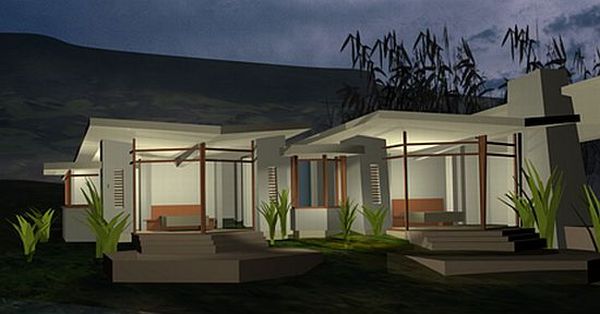 An apt confluence of passive architectural techniques and advanced design considerations, the Hi’ilani Eco House is to be built on the Big Island of Hawaii. Conceived by Robert Mechielsen of Studio RMA, the off grid dwelling is to self produce all of its essential services like energy, water, cooling and ventilation systems.

Construction wise, the house has the innovative Structural Concrete Insulating Panel (SCIP) technology. It insinuates an indirect temperature control mechanism. Furthermore, the natural cooling and ventilation mechanisms compliment it. Moreover, in a bid to further reduce energy needs, the house features inverted butterfly roofs that would pose as a water catchment system, while also improving clean solar energy harnessing. In fact, the building has a 10KW solar photovoltaic system for all its electrical needs. 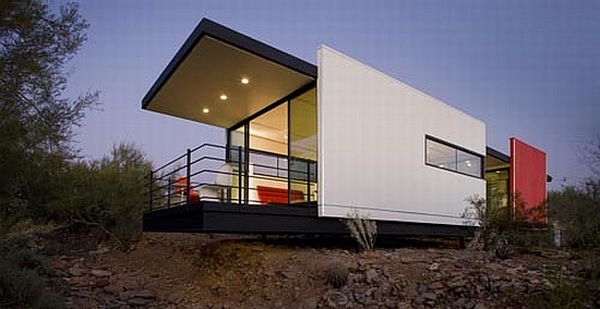 Designers from Frank Lloyd Wright School of Architecture have envisioned their version of pre fabricated home, which can stand the rigors of a desert environment. Christened as the Mod Fab home, this single bedroom dwelling relies on its hybrid mechanism of energy sustenance. That means, it can be connected to the main gird, and it can also produce its own electricity from a built in solar array. Other energy efficient features include low consumption fixtures, natural system of ventilation and rainwater harvesting with gray water reuse systems. 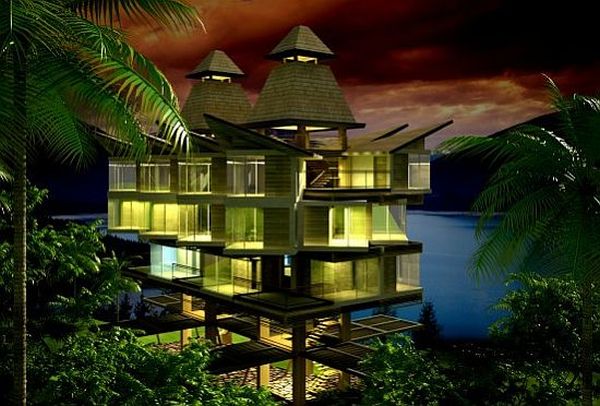 Fusing futuristic elements with a clear vernacular essence, the Cubolar House conceptualized by industrial designer Edward Castro is envisaged for the year of 2050. To be built in a modular scope, the construction will utilize only locally available building materials. Apart from that, the dwelling will exhibit a complex terraced roofing system with solar panels being integrated on each individual floor. And, even beyond generating clean power for its inhabitants, the house will also feature energy saving attributes. These include an advanced rainwater collection system that stores water in a cistern below the deck, for after usage in bathrooms and toilets. 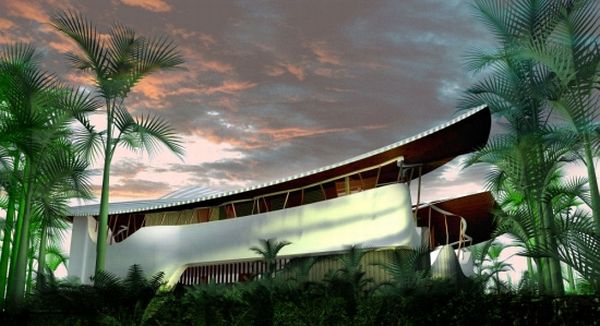 Envisioned as a luxurious dwelling with true off grid aspects, the Kokopo House aptly embodies the opulent side of green technology. Located near the Tarvurvur volcano, the building certainly emanates a bucolic essence. However, beyond the visual allure, every energy related feature in the house is derived from natural sources. For example, its roof consists of two separate rainwater collecting tanks for drinking as well as kitchen and toilet utilities. The water heating system also utilizes solar energy for working. Moreover, the design conforms to special geometric pattern for better circulation of natural air. 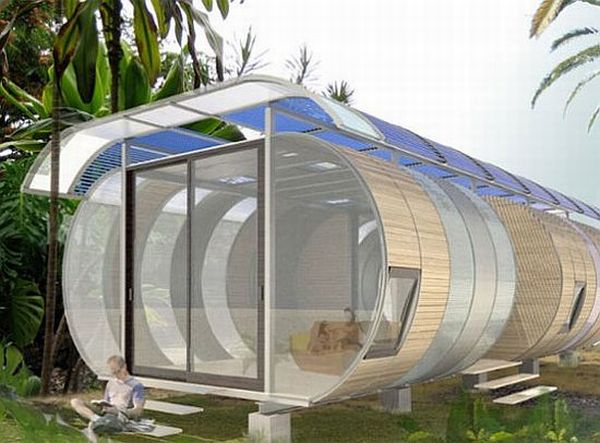 Supposedly inspired from the mundane scope of a bike rack, Palo Alto architect Joseph Bellomo has created something uniquely enticing. Dubbed as the House Arc, this off grid pre fabricated dwelling was conceived for the beautiful island of Hawaii. Structurally, the design bears a conspicuously tubular steel armature, with concrete or wooden deck as the pedestal along the ground. Then the entire 800 sq ft cylinder was draped in highly insulating translucent polycarbonate plastic for passive temperature control. And, finally, the $100,000 house utilizes roof mounted PV cells for clean and green power generation 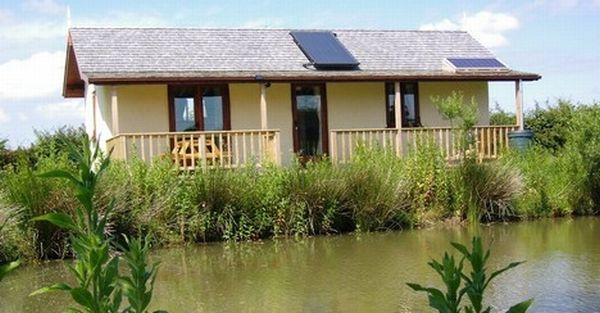 Posing as an idyllic countryside home, there is more to the above pictured conception than meets the eyes. Designed by Richard and Carol Atkinson, every constructional element associated with the house (with the exception of steel) is recyclable. These materials include some truly rustic components like straw roofing, sheep’s wool insulation, hemp for plaster strength and linseed for mastic around windows and doors. Furthermore, the house is off grid in its power consumption, with integrated features such as wind turbine, photovolataic installations and solar heating systems. 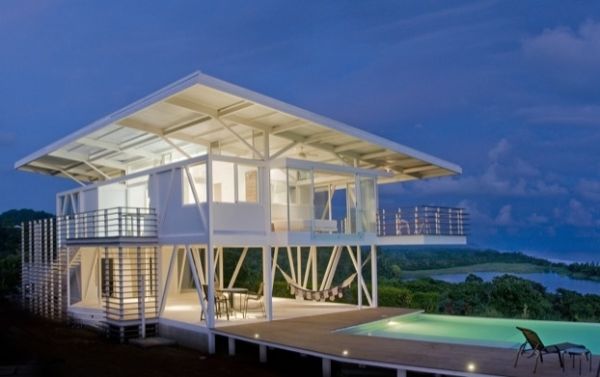 Located in the exotic rain forests of Costa Rica, the classy looking Casa ISEAMI is infused with a dual system of off grid power generation. The double storied building utilizes an on site hydropower system, which can generate up to 800kWh of electricity per year. This sustainable mechanism is complimented with a rooftop solar system that generates 10,800kWh annually. Other energy efficient aspects include passive solar design considerations for shades and rainwater collection; along with solar systems for heating of water. 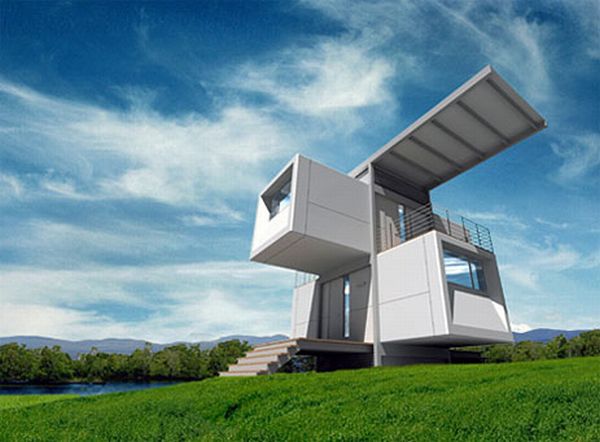 Looking like a futuristic iteration of our countryside homes, the aptly named Zero House does live up to its name. Featuring nigh zero carbon footprint, the wing like roofing is strewn with solar panels for clean power harvesting. The roof component also contains a 2700 gallon capacity cistern for storing water as well as accentuating upon the plumbing mechanism of the structure. And, since we are talking about utilities, the building features a basement compost container for organic absorption of the waste. Finally, to notch up the green level, the interior lighting fixtures correspond to LEDs for improved energy efficiency. 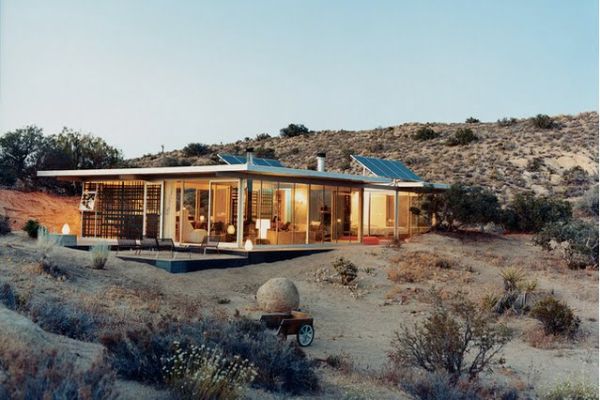 Prefabricated housing has come a long way from those mere simplistic sections quickly assembled on site. Exuding the same level of class and grace as our conventional high end dwellings, the so named iT off grid house from Taalman Koch architects ardently follows this modernistic trend. Insinuating a fully modular scope, the building comes with a 1200 sq ft area. The designers have also opted for optional sections like kitchen, bathroom and even solar installations, which can be ‘added’ to the structure according to user’s convenience. 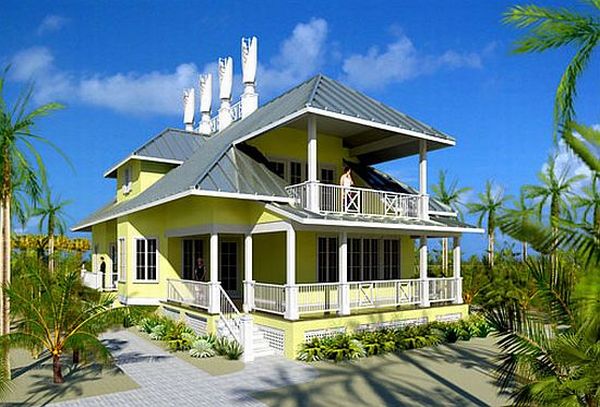 To be completely powered by solar and wind energy, Affiniti Architects has contrived a custom dwelling plan for Chub Cay’s eco conscious residents. This off grid system will feature an expansive 3000 sq ft area, with integrated renewable power systems like four vertical Tangarie Alternative Power wind turbines and solar panel arrays. The architects have also given their attention to passive energy saving components like metal roofing to reduce cooling costs and glazed R5 windows for added insulation from outdoor climate. 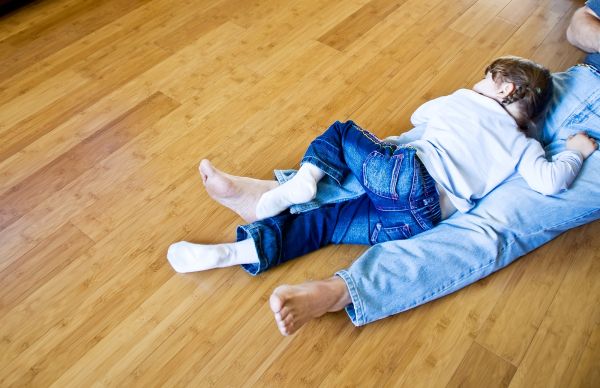