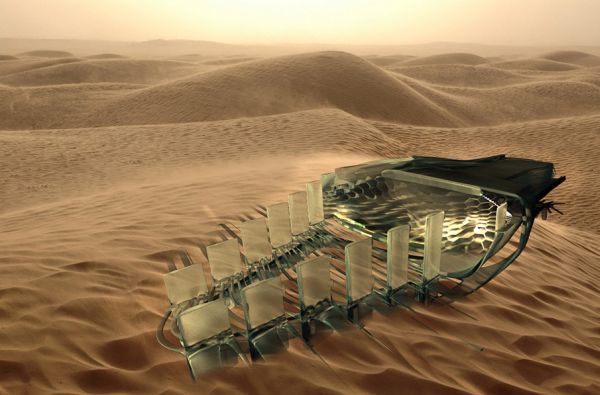 The designer of this architectural design called the Solar Oasis believes that all places on the surface of Earth have the requisite elements that are needed to sustain life and likewise, our planet also has enormous quantities of energy that can never be exhausted. The Solar Oasis project is based on this principle in which the designer aims to create an oasis in the middle of the arid and lifeless Namib Desert in Namibia, which is too hot and dry to sustain life. This technologically advanced Solar Oasis would make used of the local environment to create within its physical being an oasis that can support human, plant and animal life.

This amazing proposal highlights how modern-day technology can be used to manipulate even the most adverse situations into something worthwhile by making the most dreaded uninhabitable places, a haven for life! In this Solar Oasis, technology has been added in which the moisture from the air is pushed through a huge chilling manifold. The dryness of the Namib Desert is caused by the fact that the moisture-holding air that comes from the Atlantic Ocean does not reach the interiors of the desert as the mountains along the fringes of the deserts deflect the air and push it downwards. Hence, the moisture never reaches the desert making it virtually uninhabitable as water is the sole requirement for sustainability for plants and animals. However, the Solar Oasis would change the situation, by using the moisture from the air to make the interiors of the oasis a green and habitable protected island.

This island would have water which would be able to sustain plant life as well as the exotic fauna of Namibia. The condensed water produced by the outside air would be sufficient to nurture life on the otherwise dry desert. The Solar Oasis would also be used for making new discoveries in the field of agriculture and the production of clean energy. This mini island would enable cooperation amongst people of different cultures and harmony. The Solar Oasis would be a great example to the world to find new places to inhabit as people are overcrowding and overpopulating only a limited area of the Earth. Now people can think of inhabiting expansive deserts that span across countries and reduce the load on the cities. This would indeed be a great way to convert the most driest places into the most luscious and green ones!