There’s an old saying, ‘All things beautiful are unnecessary’. This, however, does not apply to modern vending machines. They not only provide a modern consumeristic charm to the places they are in, moreover, they also serve a purpose. In fact, these might prove to be your perfect savior when you look for your favorite drink on those hot days. However, these too come with a distressing disadvantage. Sadly, vending machines require regular electricity to keep them up and running, making it very hard to install them in open areas. Furthermore, it also adds up to the carbon footprint of these machines.

Not anymore though, there are innovations that are bringing solutions to all of these problems. Solar powers everything from outdoor lights to vending machines.
Look at these working examples of the solar-powered vending machines to get our point. 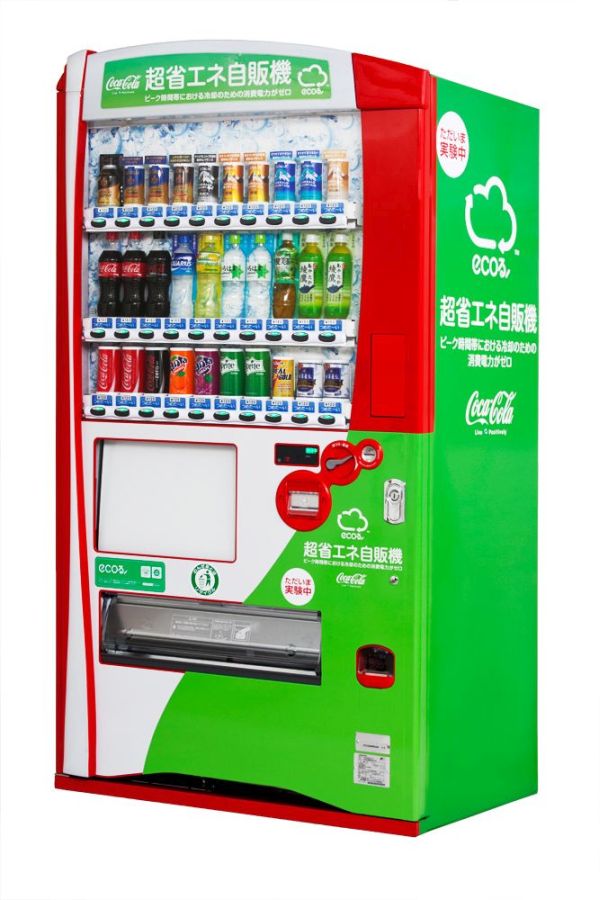 Coca Cola has created a freestanding vending machine that runs entirely on solar power. This off grid machine is self-contained and fully functional. It is also very easy to install and easy to ship, thanks to its compact solar panels and internal batteries. The machine can turn out to be a great asset in open areas like promenades, boardwalks, beaches, ballparks, college campuses, amusement parks and even military bases. All that it needs is the sun to function. What if there is no sun? The machine simply stores surplus energy in its batteries, powering the machine for at least five days on this stored energy. 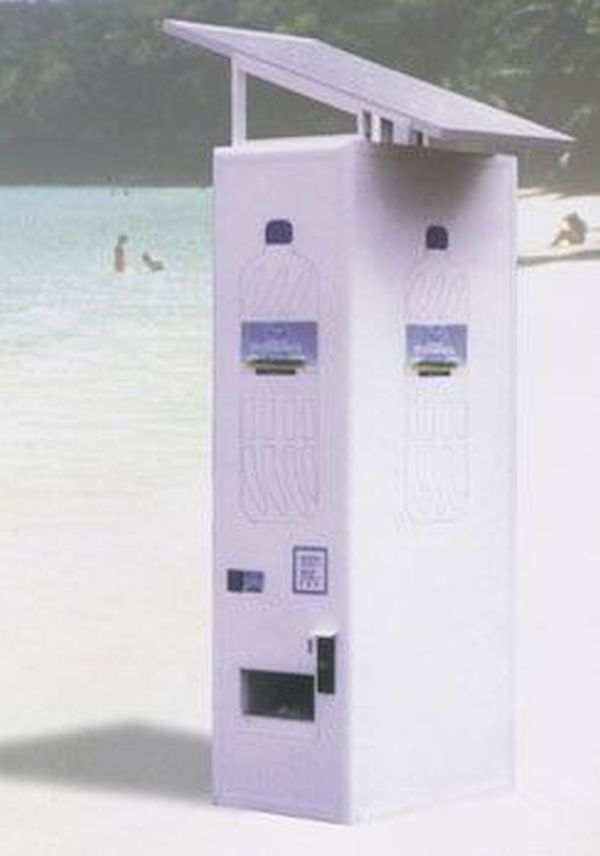 Springwise has also come up with its own unique plan to design a vending machine powered by solar energy. The machine incorporates a strong refrigeration system that can keep the foods and drinks inside it cool for hours. It is fitted with solar panels at the top to absorb the sun’s rays. The electricity thus generated is used to power the vending machine as well as recharge a battery that would keep the machine running at night and on cloudy/rainy days. An inbuilt wind turbine can substitute for solar energy in areas where the sun does not come out too often. 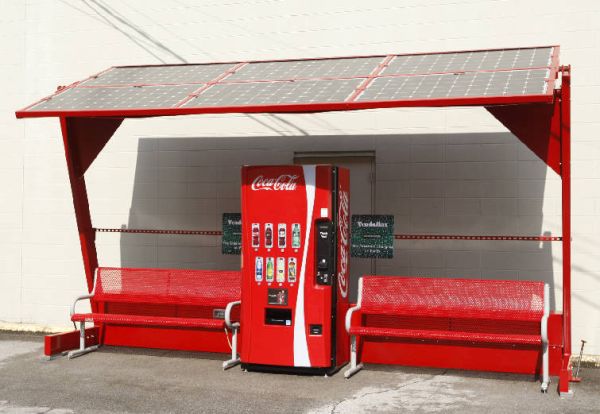 Another company called Solar Vending has developed an entirely off-grid vending machine that uses solar power to power its refrigeration and vending mechanisms. The off-grid ability would allow the machine to be placed even in remote locations like in the middle of a golf course.

A number of companies have started developing solar powered vending machines to keep beverages in the most sustainable manner. Utilizing only the sun’s energy for operation, these machines will be a blessing for people living or travelling remote, off-grid locations. 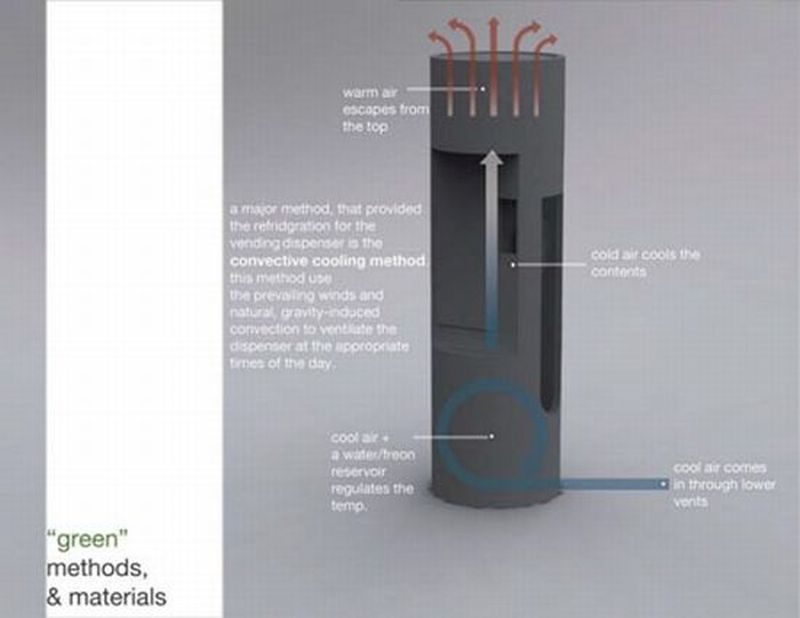 This is a marvel by not some experts working solely to make the world a better place to live in but by an ambitious student who dreams to make it big in the green world. Justin Pittman, encouraged by the present day machine, has created an innovative machine that works in an eco-friendly way. Named as smartVND, it uses natural cooling techniques to keep the contents at a constant temperature. The materials used are laminated woods, solar cells, clay coated straw and semalfa water adhesive.

5. PepsiCo testing the greenest ever vending machines in U.S.: 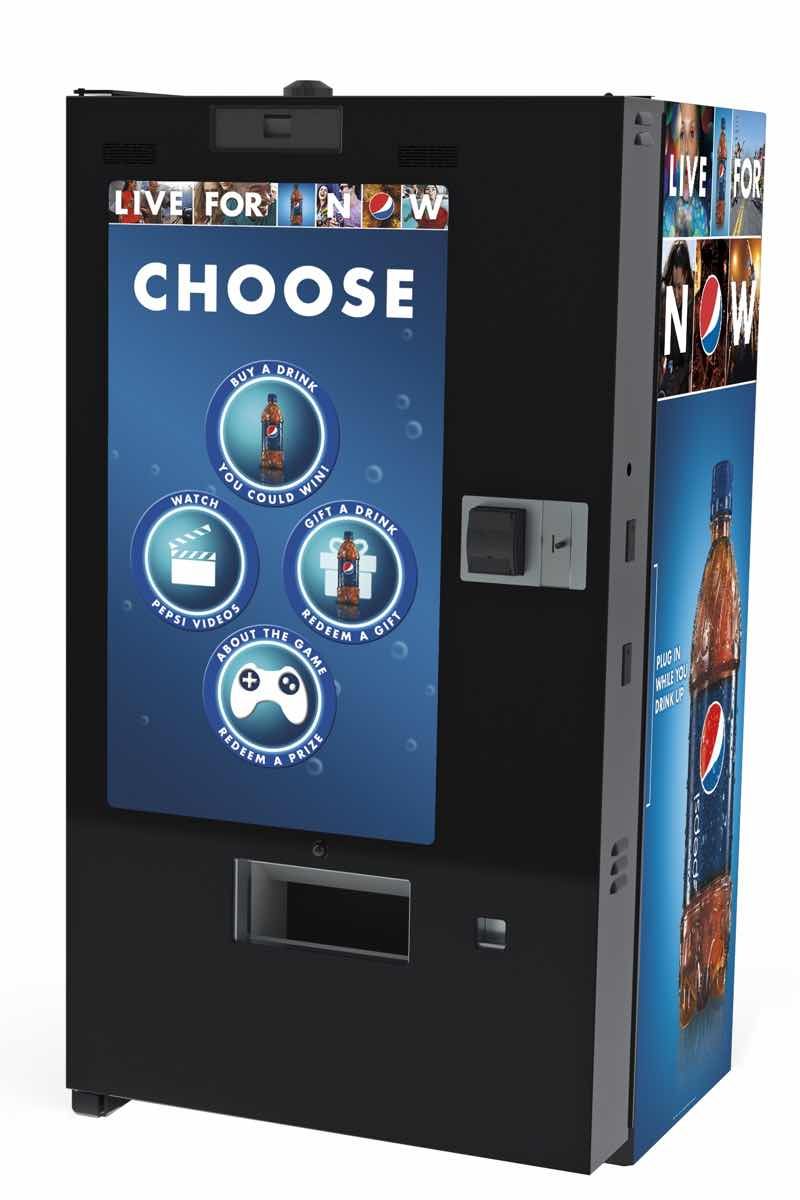 Not far behind is the soft drink giant PepsiCo, working out to contribute its bit. Apparently, it has developed a new breed of vending machines which consume just 5.08 kWh of electricity. On daily basis, this saves approximately 1 kWh of energy. These machines make use of CO2 instead of HFCs for cooling. The company is further working on machines which will use green refrigerants. However, the costs are much more than the current ones. 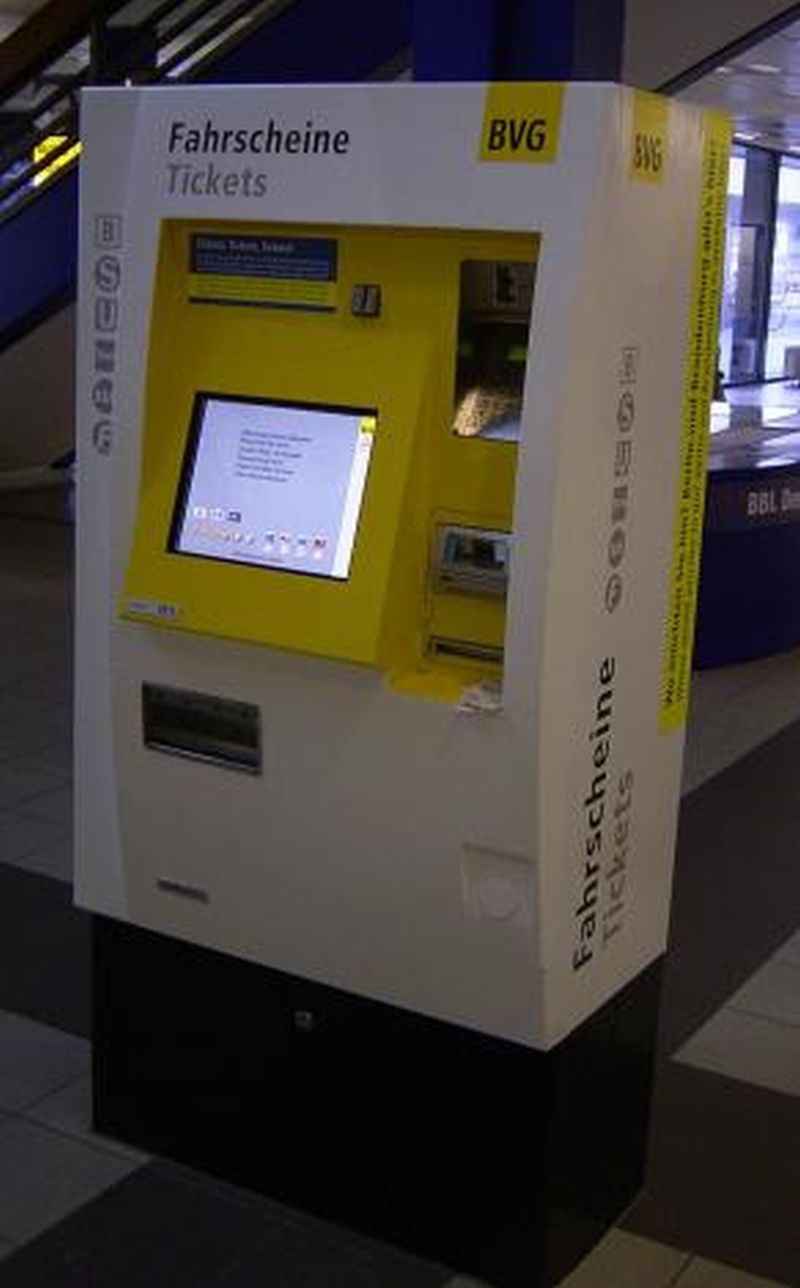 Solar energy has always been a front runner when we talk about eco-friendly or renewable sources. An Anglo-Spanish has come up with a similar concept for vending machines. Solar Energy Vending or SEV, as they call it runs on solar power. The solar panels inscribed in it keep the machine running, whereas rechargeable batteries ensure a consistent power supply during rainy season or at night. Apart from cooling its contents, they also display advertisements. 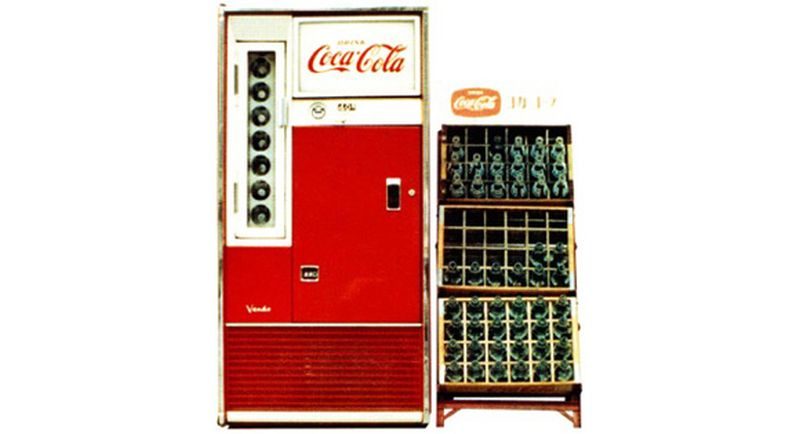 Coca Cola has initiated the green vending machine line-up in Japan. Since the concept is spreading rapidly in the world, the soft drinks giant took the opportunity to launch prototypes of these machines. The newest machine by the company, Ecoru/Solar, is equipped with solar panels on top. It is estimated that Coca Cola is planning to install 1500 units country wide with 2.4 million beverage dispensers. Another company which is planning to give a competition to Coca Cola is Fuji Electric. Its models too will work on solar power. However, for insulation in winters, it is planning to grow moss on its side. 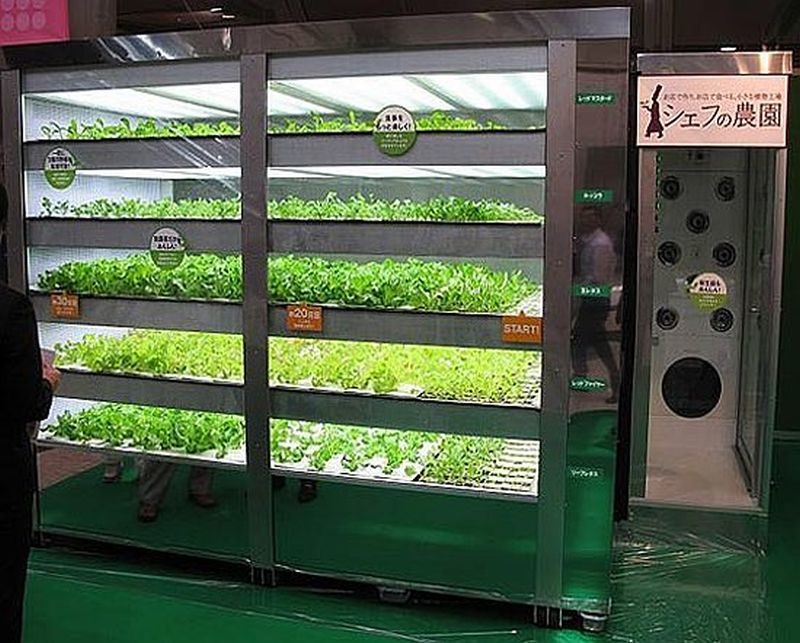 This one may not ring the bells for a perfect green statement. However, if solar panels are used for the production and harvest, it may seem like one. Dentsu Facility Management has developed a machine, which can be installed indoors and named it as Chef’s Farm. It uses 1240W of CFLs to mock solar energy. By using this machine, you can harvest 60 heads of lettuce each day. 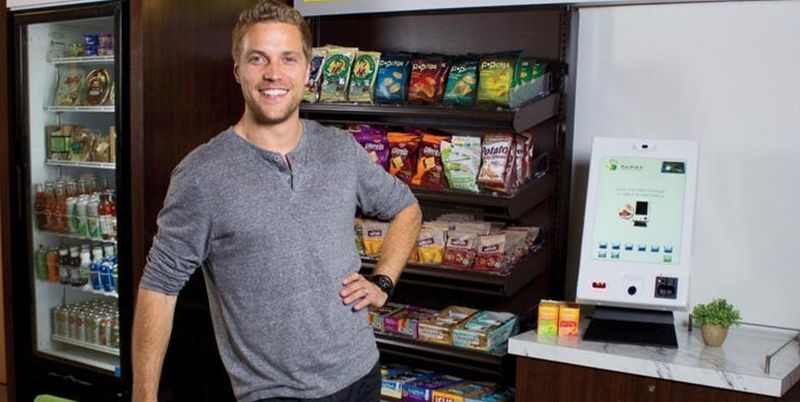 Sean Kelly, an engineer (biomedical) has come up with green vending machines which he has named as H.U.M.A.N. (helping unite man and nutrition). It has a better insulation, efficient cooling system, LED lighting and triple-paned glass to absorb 30 to 50 percent less energy. Some of them even have the feature of ‘shutting down’ when not in use. Whenever a refill is needed the remote senses it and informs you.

Very rarely do we say green statements go hand in hand with sleek style. Since Japan is popular for its obsession with vending machines, most of the path-breaking inventions pertaining to these machines take place there. Recently, Coca Cola has launched a vending machine which has a 3D display. Apart from energy-saving LED lighting and solar display, it boasts of a unique tracking function which displays the social contributions the machine’s sales have made. 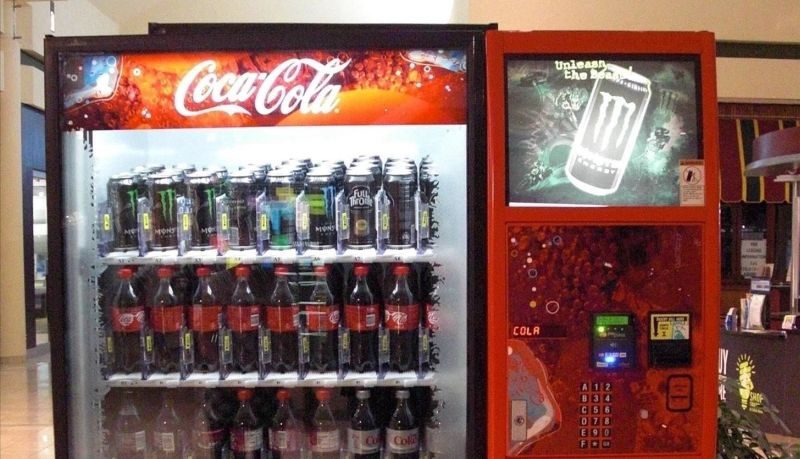 Coca Cola is one company that has taken criticism regarding its anti-environmental strategies, positively. One after another it is coming up with eco-friendly vending machines across the globe. In a bid to expand its green credentials, it is planning to replace over 6, 000 power eating machines with eco-friendly ones. They emit 75 percent less greenhouse gasses. Another step from the soft drinks biggie for the better of all!

You can place these new lines of vending machines literally anywhere without worrying about electricity to power them. These machines use an alternate power source, the sun, to get renewable energy. They could prove to be the harbingers of an entire new eco-friendly era.