In modern times, when the world seems all messed up and creepy, it becomes rather difficult to grab attention from people around. But, now there is happy news for all fashion geeks, who are looking for striking apparel that will put them in the limelight. Maison Martin Margiela has designed a marvelous jacket using the caps of pens, particularly blue caps. And, the reason why this rather gaudy jacket is being covered by EcoFriend is its green disposition that we will further elaborate after the break. 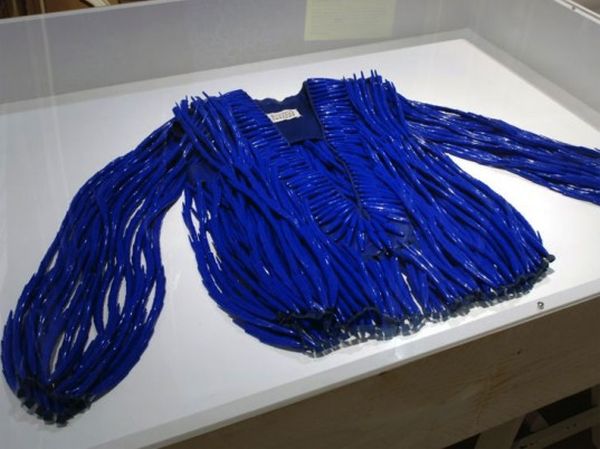 What is the common fate of old used pens? Well, generally they end up at landfills never to be reclaimed. And, what would anyone of us do with them anyways; once they have no use. This is what you and I would think, but not designers like Maison, who used the caps of old worn out pens to craft a jacket, and, in fact a designer jacket that would make your heart a skip a beat.

Maison wanted to explore the intersection between fashion and function. Fashion was not so difficult to bring out, but functionality that too incorporated with greenness was a challenge. He deftly put together hundreds of blue pen caps strung over a cotton base jacket. The arms were given no lining, making them reveal a bit of your skin, stylishly. Caps of uniform color were used and they all had a glossy finish, which would shine even more when in light.

Perfect for a ravishing at a disco night; it has a tinge of retro design, a bit of punk and loads of greenness. Don’t go by its green tag alone, because it indeed is wearable and was once displayed at the Museum Rotterdam, displaying how everyday objects can be given a new life altogether.