The gap between mankind and nature is slowly but surely widening. While we have lived off the earth for millennia, it’s safe to say that we have barely given anything back. This is now causing problems as we see ourselves gazing into a future where resources are depleting, land space is scarce and pollution is at an all-time high. Our way of life has distanced us from the natural environment so much so that our understanding and connection to our surroundings is all but broken. Is there anything that can be done to reverse the trend? Maybe, if certain designers and architects have their way. 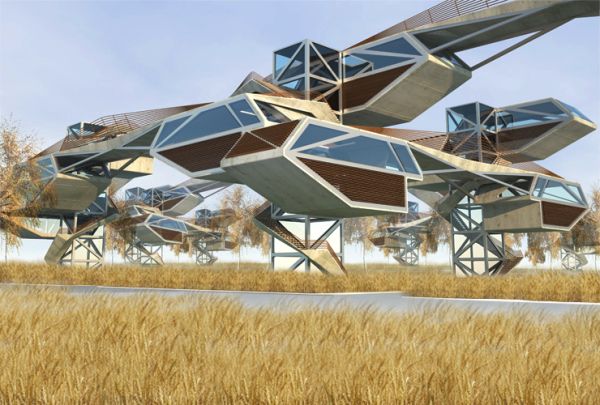 24 Degrees Studio is a firm that seeks to integrate living with the environment, technology and architecture. Its method tries to prove that urban living doesn’t have to necessitate damage to the environment and can be accomplished through sustainable and intelligent designs instead. It hopes to be able to make interaction possible between man and nature which will hopefully see us finally living with nature and not living off it.

24 Degrees Studio has conceived a project called Hybrid Forest wherein structures will aim to use as little land space as possible. Four houses make up the project with all of them occupying a 36mx36m grid each. The space saved in between the houses can then be used for recreational activities. Plenty of glass will be used for construction of the Hybrid Forest to initiate ample natural lighting and scenic views of the natural surroundings.

Each of the four units will have its own parking space and garden located in the given block. An elevator will be installed to elevate the car to its allotted space. On the same floor, a private garden will be constructed for inhabitants to plant and grow flora of their choice. The upper floor will have its own private viewing space, free from the eyes of the neighboring units. However, those who do want to interact with people living in the other units can do so via access ways on the rooftops.

24 Degrees Studio’s Hybrid Forest is a refreshing concept from the usual attempts to create green spaces in and around urban landscapes. While those methods help to a certain degree, there is no beating living in an area where your home and nature embrace each other. Healthier and far more peaceful, such concepts can provide people living fast-paced and stressed out lives a cozy and quiet nook to come home to.

24 Degrees Studio’s designs are minimalistic and contemporary, combining simple lines with earthy and muted tones. It also involves itself in interior decorating and what is unique is the architects’ ability to give even small rooms the illusion of spaciousness. Examples of the firm’s works can be viewed at its website.

It isn’t known if Hybrid Forest will ever become a reality but such efforts to design homes that blend architecture with nature are always welcome. In this age of concrete and skyscrapers, it’s a pleasant change to come across designs that give the impression of sprawling homes without actually utilizing large amounts of space.