Haven solar-powered emergency shelters can be stacked for easy transport

Nature is fickle minded. It gives us many blessings but sometimes it robs us of the very basic necessity. Sometimes when some unfortunate disaster strikes us, although we obtain plenty to eat, we are unable to find a shelter.  People who have lost their home in flood or earthquake know the pain of living in emergency shelters. Wars also destroy homes and force people to live like refugees in meager emergency shelters. These shelters are often not capable of meeting the needs of people residing in them. Moreover, these also cause environmental pollution. To tackle both these problems, scientists have come up with sustainable solar-powered emergency shelters like the haven.

The Haven is a concept emergency shelter that can easily be airlifted to disaster areas or war zones. Designed by Song Kee Hong, Timothy Hoo, Ng Teck Tiong and Felix Lee, the Haven units can be flattened and stacked to ease transportation. Furthermore, the panels of these shelters consist of plastic sheets that enclose a thin core of honeycomb and air for insulation and structural strength. 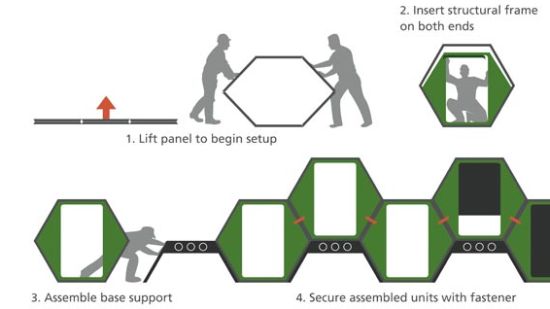 Occupying less space than conventional tents, one can stack the haven units against each other to improve protection from the elements. The flip-open platform can accommodate a second occupant and can provide storage space for one’s belongings. The units feature roof-mounted solar panels that generate renewable electricity to facilitate charging of portable communication gadgets. 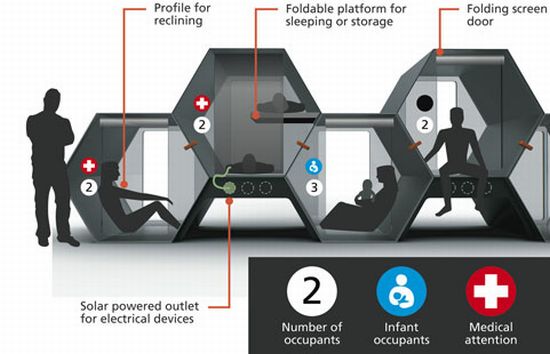 Some more emergency shelters similar to the haven

Environmentalists and architects have joined hands to create brilliant emergency shelter concepts that are eco-friendly in nature. The haven was just one such concept, there are many others. These concepts can reduce the global pollution rates substantially and enable the refugees who have lost their homes to live with dignity. Here is some information regarding such eco-friendly emergency shelters. 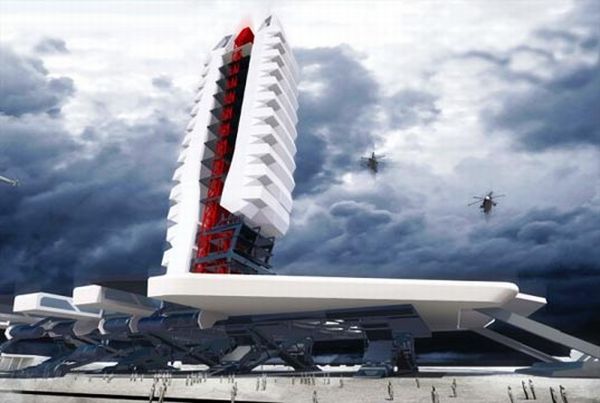 Skyscrapers help in reducing environmental pollution by cutting down the emission of carbons. Adrian Ariosa and Doy Laufer have created an amazing emergency shelter concept named Mastodon. It is a mobile skyscraper that can be easily carried from one place to another. Moreover, it is built on vehicles that can move through water, plain land, and rocky terrains. It is a high tech concept that includes solar panels, wind-powered turbines and a system for saving rainwater for reuse.

The Modular Housing for Humanity Concept was designed by Deborah Gans and Matthew Jelacic for a competition named Architecture for Humanity. The modular structure can be built by anyone in a very short period of time. It is basically a small four by eight-foot room but the structure provides enough support for building a bigger shelter centering it. 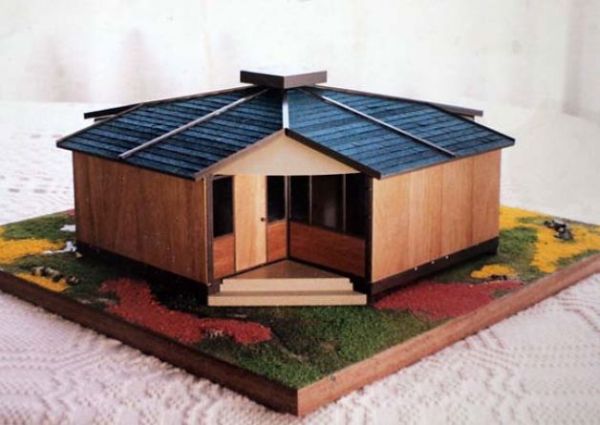 Dante Bini has developed an emergency shelter concept that is capable of floating on water and can be built within just thirty minutes. It is easy to assemble and can be made with different sorts of available materials.

The easily foldable Metaplate Disaster Shelter can provide good accommodation facilities to people in distress. It includes a drainage system and uses specially prepared, affordable cardboards. This concept has been developed by Kelvin Yong, a Singapore based architect.

The lightweight and recyclable Recovery Huts are beautiful and provide sufficient covered space as an emergency shelter to the refugees. Two huts can be joined together to increase the living space size. 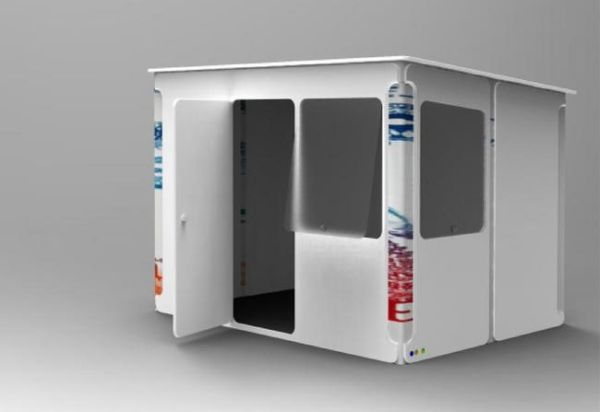 In certain conditions, it becomes very difficult to gauge the advancing and effects of any protracted natural disaster. Keeping this in mind, the designer of CLAP has come up with a system that would be reactive rather than proactive.

The designer of CLAP embarked on detailed research on alternative solutions as opposed to conventional systems of emergency requirements. The resulting examination alludes to certain criteria – the construction should be tool free. Moreover, it should be easily achievable. It should have a supply of clean electricity (with a usage of solar cells). Furthermore, it should also have natural cross ventilation components and finally – the structure should be upright and sturdy.

Structurally, each of the temporary dwelling units will comprise of six rigid individual elements to give an essence of a strong framework (that can withstand the effects of nature). You can connect these hardy elements to each other in a flexible manner with sturdy tarpaulin.  Functionally, the individual units will have a capacity for four people. 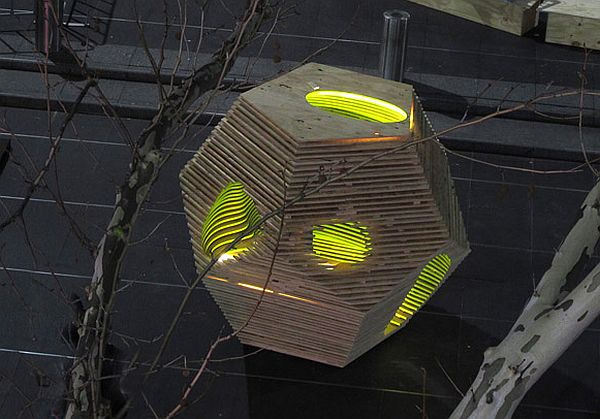 The world is witnessing a growing concern among its population about housing problems, especially after natural disasters like earthquakes and tsunamis, and therefore to solve this problem designers at LAVA have come up with a new strategy of making ‘Digital Origami emergency shelter’. Origami from ‘ori’ meaning ‘folding’ and ‘gami’ meaning ‘paper’ is the traditional Japanese art of paper folding. It has now evolved. Now it is a modern art that’s popular all over the world.

A conceptual archetype ‘Digital Origami emergency shelter’ owes its genesis to  Sydney based practice LAVA (Laboratory for Visionary Architecture). It was first put on a show in Emergency Shelter Exhibition Sydney, Australia on September 3, 2011.  It is in the form of a water molecule. Therefore, you can easily attach it to the other such molecules to form an interconnected village type network.

It serves as a replacement house during natural disasters like earthquakes and tsunamis. A single structure is capable of accommodating comfortably two adults and one child, where they could easily perform daily activities like eating, reading and sleeping. 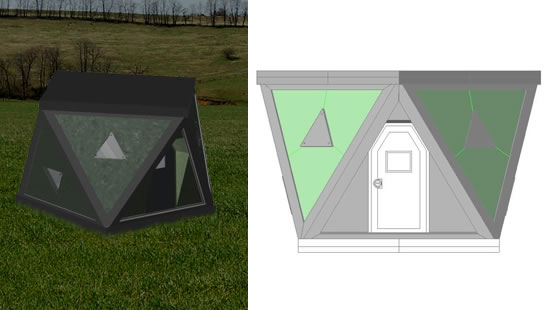 Due to natural disasters such as earthquake, hurricanes, typhoon or tsunami, hundreds of millions of people throughout the world do not have adequate shelter. And who knows what and when it will be next time? So here is a well designed eco friendly option that is intended to house four individuals in case of emergency. Known as Mobile Green Disaster Shelter, it is an ideal light weighted, easy-to-set-up model for warmer climates.

Instructions are simple, based on matching symbols, such that any adult, literate or illiterate, in any culture can build the shelter. This modular structure is built similar to folding a box. You can erect it by just sliding the pieces in to correct place. This whole green disaster shelter consists of bioplastic that only degrade during industrial recycling.

Since the structure does not contain harmful chemicals, glues or tape, none of the components would off-gas harmful vapors. Moreover, as there is no chance for the luxury of electricity at such times, the walls of this den are slightly translucent. They allow natural light to enter the structure during the day. Furthermore, they also reflect the heat  from the sun. However, for dark nights, light is there. It is very resourceful. One can easily transport it at the back of a small pickup truck.