The most significant portion of the human population lives in or around cities. Therefore, if we are improving urban transport by making it more eco-friendly and efficient, it would have a significant impact. Moreover, if public transportation is convenient, fast and affordable enough, people would give preference to it. This might help us in tackling the toxic traffic congestion problems that are choking some of the major cities of the world. In addition, it is also necessary that we make our transportation malleable enough. Our buses and trains should be able to adapt according to our needs. The Eolo Bus and other transportation concepts mentioned in the article show exactly how to do it. 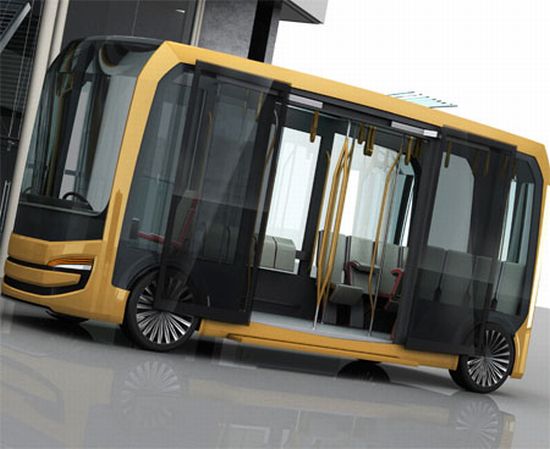 The Eolo Urban Transportation Bus concept by Krassi Dimitrov has been designed not only to reduce emissions on the streets with an electric drive, but also clean the toxins eliminated by other conventionally fueled vehicles. 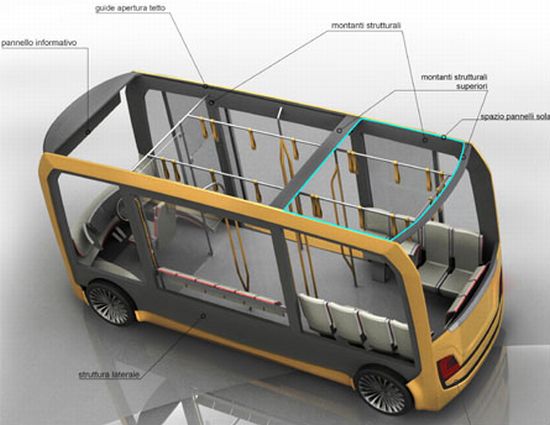 The Eolo Bus features four-wheel steering, and each of its wheels carries an electric motor that is powered by nano-titanium anode batteries. The motors are also equipped with air filters that clean the particulate matter from the air. This compact bus might just be perfect for the streets of tomorrow which are expected to be clogged and polluted. 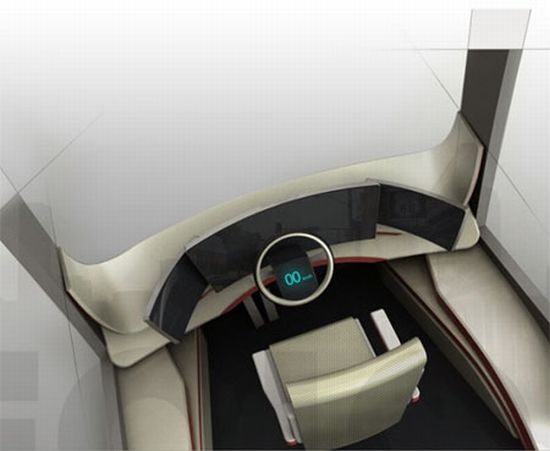 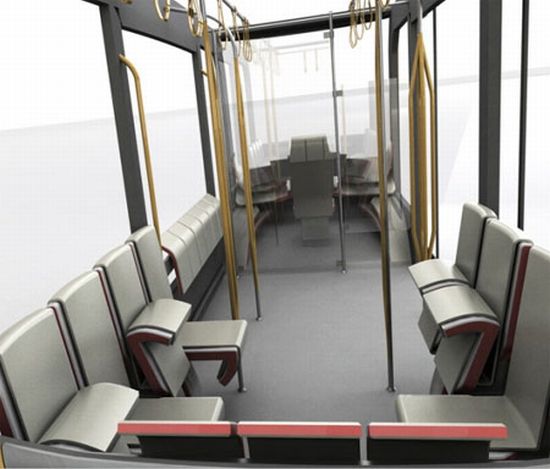 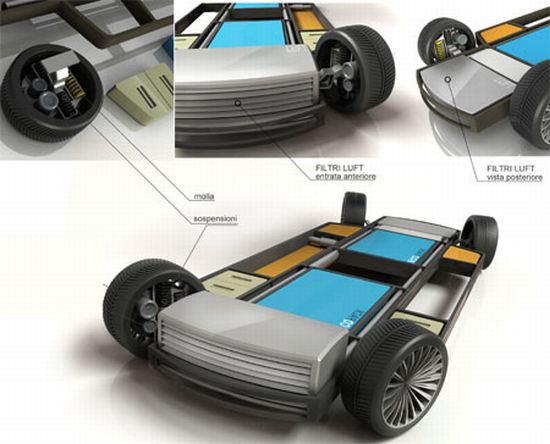 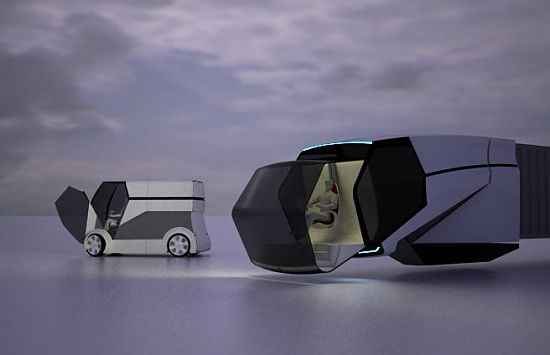 Transporting cargo over long distances on fuel-guzzling trucks leads to an increase in emissions and a decrease in driving space. Truck designers have recognized the need to reform cargo transportation and have developed newer means of transport that minimize emissions and maximizes space owing to a unique transforming ability. Industrial designers Tobias Förtsch, Aram Haydeyan and Stefan Brenn have a different opinion – divide the transportation system into two, one favoring long-distance transport, and the other includes transporting goods over short distances.

Tobias has developed a new concept of cargo hauling, the Transport Efficiency 2020, which is based on the use of two vehicles – the long distance “Airliner” and the shorter range “Cityloader.” This long-distance transport vehicle is actuated by superconductive magnets. Superconductors produce frictionless levitation, avoiding any mechanic resistance, enabling the vehicle to hover above rails that are embedded in the street. These rails create a magnetic field, which propels and stops the Airliner. 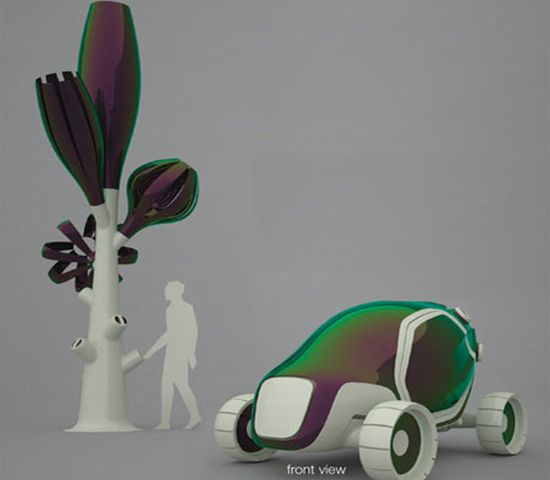 The E-Capsule is the brainchild of industrial designer Alex Dumler, who believes that energy is everywhere and there is no dearth of possibilities to use it and be independent from the conventional sources of power. The designer rethinks the term “Gas Station” to something like “Energy Station”, which is much smaller, cleaner and more flexible than conventional gas stations.

The E-Capsule is based on three parts. The first part is a tree-like structure that generates renewable energy using wind, rain and sun. The second component is the E-Capsule, which stores all the energy that is harvested from the renewable energy generators. The last part of the concept is an eco-friendly vehicle for two.

The E-Capsule can be pulled out from the tree and attached to the vehicle. A fully charged E-Capsule provides an operating range of 75km and the vehicle can carry up to four E-Capsules to give a driving range of about 300km. 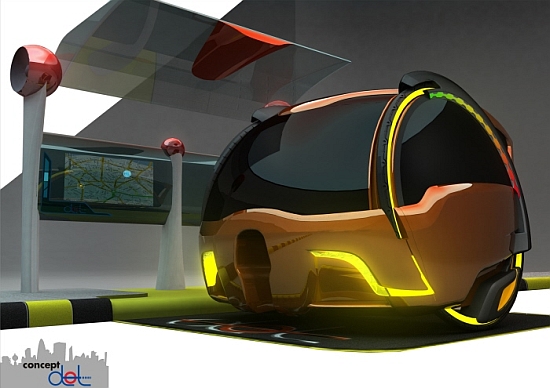 One can speculate the future up to an extent, but if anyone could ever be sure, then I believe we should start creating designs and plans for the future, which could end all crises confronting mankind at present. We’ve covered many concepts cars which do have something in them that to an extent makes them green, but I can be sure about “Concept Dot”, vehicle designed for the future that it’s the weirdest car we have seen so far.

Designer Varun Niti Singh claims that if a proper system of sharing and availability is employed, Dot can prove to be a success. It’s sort of single unit which can either be driven individually or in combination. While on the road, it can function in a network and invite other similar units to attach with itself. Electromagnetic force will help combine additional units. 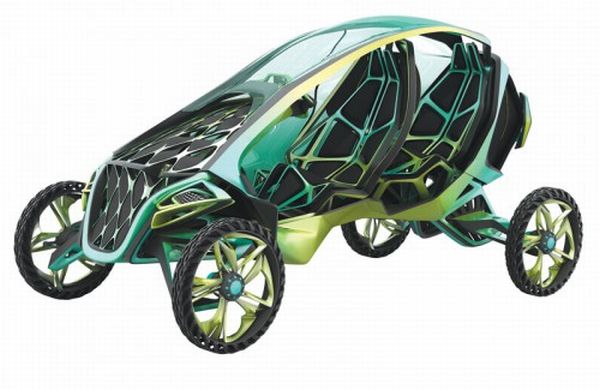 The world’s quest for alternative city riding options is going wild. Here is a splendid Urban Cruiser concept from the Slovakian designer Michal Kukucka for urban transportation. It is a lightweight vehicle with the power of a motorcycle, but with the comfort of a car. The vehicle is meant for youngsters between 25 and 35. Urban Cruiser is not just a vehicle for traveling, indeed; it is superbly designed for sport activities also, especially in summer time. Of course, aside from using for city driving, it can be run in leisure hours for fun. The eco-factor is that the city car runs on electric power. No gasoline is required.

The car has airless tires, which can push out the mud and smudge while moving on solid road. Indeed, the wheels are designed to clean themselves. For constructing the body, aluminum foam is used, which will ensure light weightiness of the vehicle. The aluminum foam is solid enough to make the car’s body rocky, however. The rain-resistant top glass cover is a gradient growing from the bottom. Batteries of the car will be flexible conductors, which will help you make whole bodywork from the same material. Thus, you won’t have to look for space for the cruiser batteries.

The concept car features a u-book control unit, which records many details including all information about the battery. It will show you the current battery status and how many kilometers the vehicle can move with the remaining power in batteries. As a whole, the facility will keep you updated with all information regarding battery life and others. The entire space inside the car is for some purpose. Its designer claims that the vehicle has no useless space. Every part is dedicated for purposes like keeping backpacks, personal things or other lots of baggage.

Again, it is not only for transportation. You have a facility called Car Port to connect your computer or tablet via a USB cable with the car. As well, there are elaborate facilities you can check all social networking sites inside the car. Along with driving, you can share and update your Facebook profile. The vehicle’s dashboard also sports a special casing to contain you laptop. While in the case, you can connect it with the car via Car Port with a USB cable.

Urban Cruiser is a complete ecological city transportation vehicle for your cities. You can travel on the car wherever you wish. As little space is required to travel the vehicle, city commutation will be a heavenly experience for you. Moreover, you can protect your pocket without the need to pour in fuel in the vehicle. It also empowers your fight against climate change; and such cars will certainly reduce the carbon footprint of your city and country. 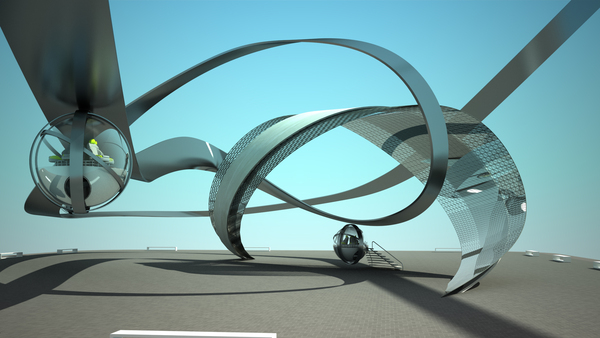 Concepts have the ability to instill fascination in all of us. The fact that innovative ideas could one day make their way into our reality is what keeps creative minds going. And, thank heavens for that as we’re presented with an array of designs that given the right technology and focus, aspiring to change the way we live.

Magnetic levitation, a technology that allows transport systems to travel based on electromagnetic principles, seems to be the basis for quite a few ideas. One that’s caught our eye is the conceptual transport system by Luke Spillet, a British industrial designer. The project is still in the works with Spillet promising to update us on its status by the end of March.

Unlike magnetic levitation transport systems used in certain parts of the world, Spillet’s design is fancier and far more futuristic. Instead of a straight track, his concept makes use of a spiral track. You wouldn’t be wrong to question how passengers would be comfortable riding along a path that’s similar to that used by a roller coaster, but Spillet’s concept is designed to keep users sitting upright owing to the installation of a gyro system. It is this system that will counter movement in all directions.

So why did Spillet decide to design something so different? His idea is to follow the way air and energy move through the environment, a flowing scheme of sorts. Users will be seated in a pod like enclosure that moves along the tracks using electricity and is kept afloat by magnetic levitation.

Spillet is hoping that his conceptual urban transportation system will alter the way London communicates. Like all concepts, there’s no guarantee that his will see reality, but it’s a novel approach to transport system issues of today. His artistic take on how people of the future will travel may very well see communication methods being gradually transformed.