Despite being modern, the greatest disasters around the world like the South Asian Tsunami and Haiti Earthquake show our lack of preparation. Not only we lack relief shelters for such emergency, in addition, the ones we have are also not sustainable. Therefore, we need to assure a few things with our modern disaster shelters. They should be clean, mobile, portable, tough, eco-friendly and autonomous. Contemporary emergency housing ideas like X2Shelter fulfill many of these criteria. Let’s check them out: 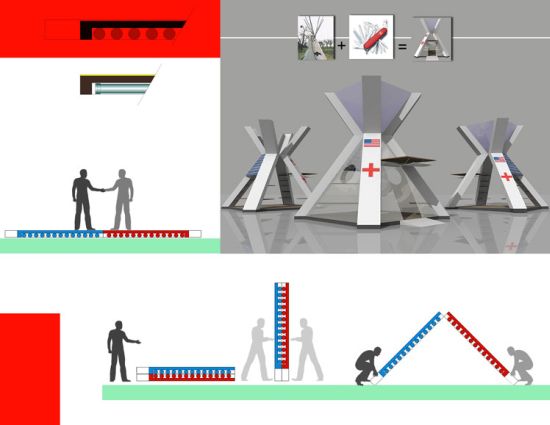 GEOTECTURA Architectural Studio has come with a concept emergency shelter that is both green and easy to deploy. Dubbed the X2Shelter or X2S, the emergency shelter can be airdropped to unreachable disaster zones and is powered by renewable energy. The X2S can be used as a standalone tent for dwelling, sanitation and health care and can also be connected with other X2S shelters to provide shelter for many people. 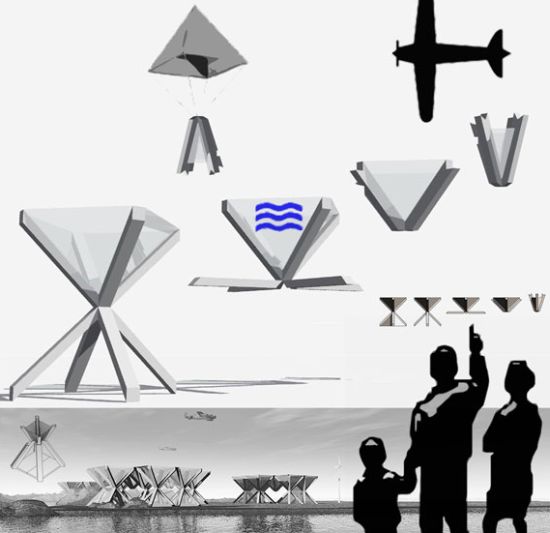 The shelter optimizes passive ventilation and illumination and also features solar panels and small wind turbines that provide the energy it needs for lighting and telecommunication. In addition, the X2Shelter has a rain collector on its roof that stores water inside the structure’s poles.

Later, after utilizing it once, the X2Shelter can be folded for reuse or recycling. 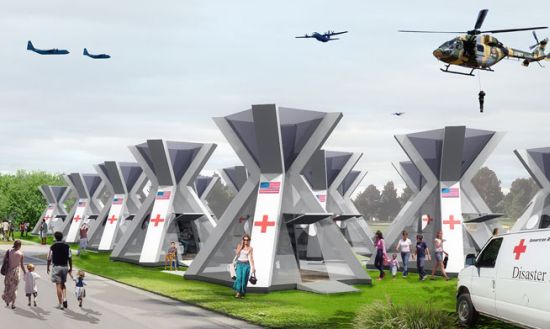 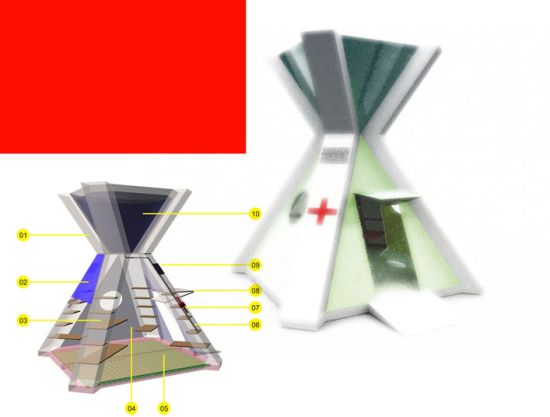 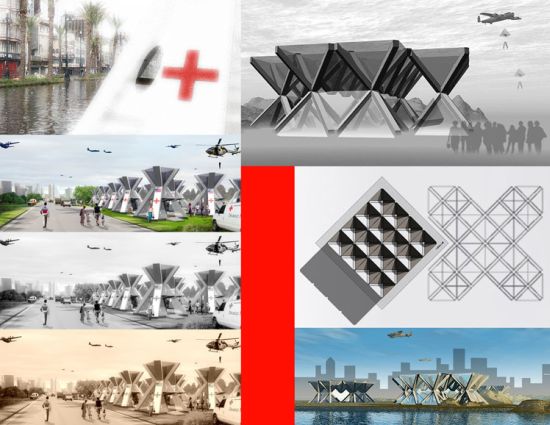 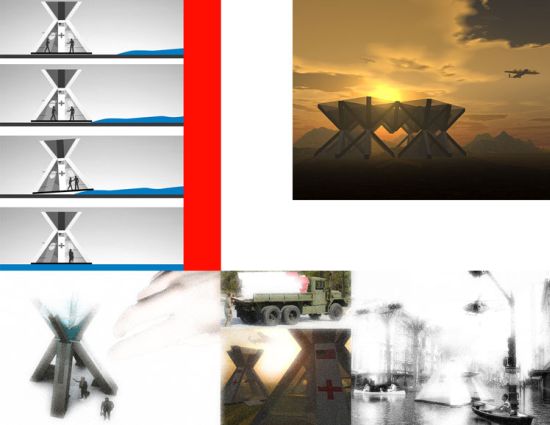 The Haven units can be flattened and stacked for transportation, as they can easily be airlifted to disaster areas or war zones in their compact form. 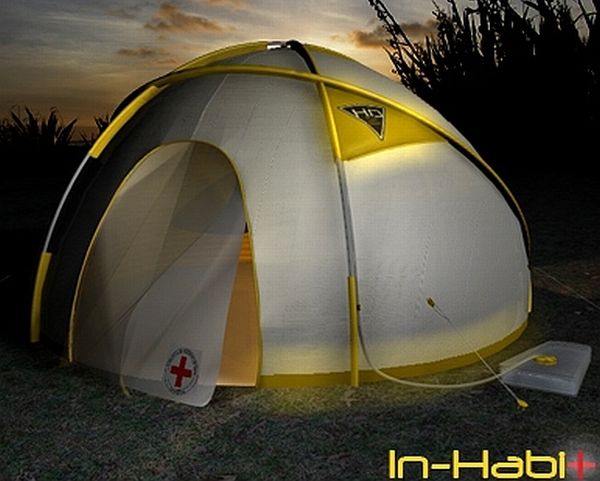 Industrial designer Todd Kramer has come up with a convenient yet advanced conception in the form of In-habit. It’s a lightweight shelter made from sturdy materials, which utilizes solar energy for interior lighting.

The adaptable design is constructed from a high-tech material composed of thin polyethylene teraphathalate, known commercially as SmartWrap and derived from recycled plastic bottles. The shelter is made waterproof by embedded microcapsules of Phase Change Material that regulates latent heat in structures that are completely enclosed, allowing the shelter to be used in any part of the world. Moreover, the flexible cladding also harnesses solar energy, which is used to illuminate the shelter after dark using energy-saving OLED lights. 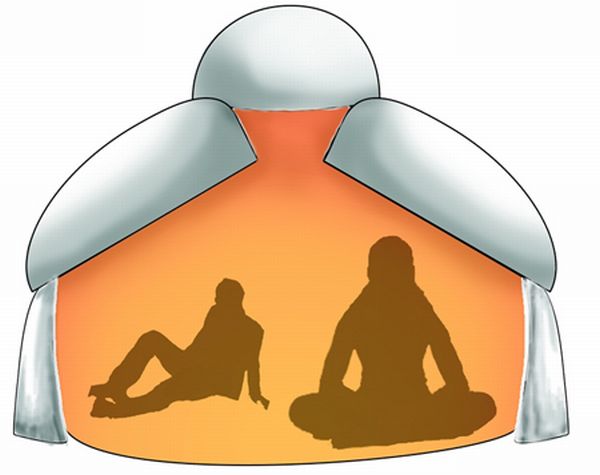 Designer Jonathan Ferrer has contrived of a concept that concourses elements of functionality with convenience of portability. Specially designed for disaster-torn areas, the disaster shelter will basically be an egg-shaped temporary housing structure.

The outer shell will be composed of sturdy materials, while the a layer of orange colored legs will create a weather resisting shield, making the whole contraption totally water as well as wind proof. It can also be easily transported because of the flexible outer skin. 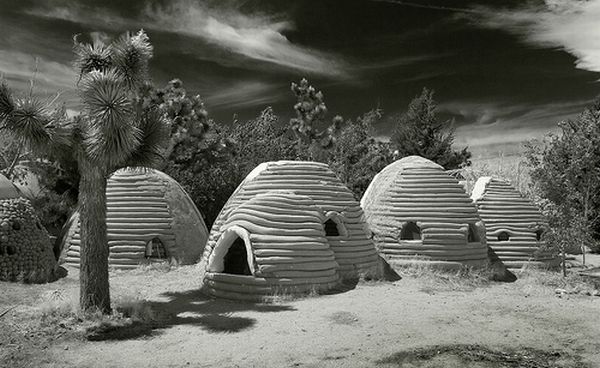 Iranian architect Nader Khalili has ingeniously developed the sandbag or ‘super-adobe’ type of construction utilizing one of the oldest building materials in human civilization – Earth. The simple technique involves filling sandbags with earth and laying them in courses in a circular plan. The circular courses are then corbelled near the top to form a dome. Barbed wire is laid between the courses to tie down the sandbags and also to provide earthquake resistance.

It’s particularly conducive for temporary construction, in view of the low cost involved and simplicity of technique. The occupants can themselves participate in the facile construction process. 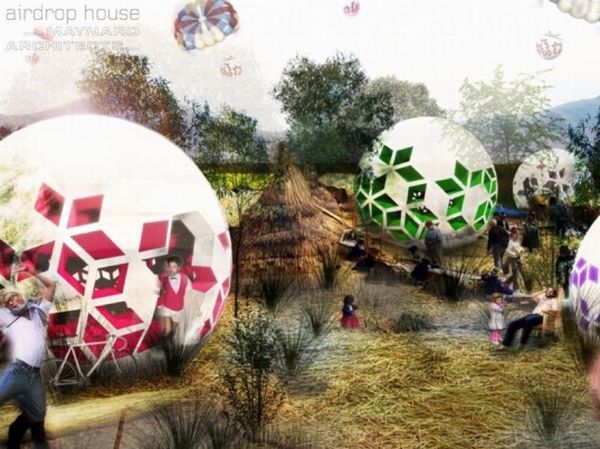 Andrew Maynard and his team have come up a fascinating concept of AirDrop House, which can actually be dropped from a standard military aircraft into a flood afflicted area! As soon as the spherical housing kit (made of sponge like material) hits the water, it will begin to soak up water and ‘blossom’ into a food-producing, self-sustaining temporary dwelling.

Starting from a diameter of 1m, the house can balloon into a turgid mass of 7m diameter by taking in water. The house can move about in the flooded area and filter the water by soaking it up. Moreover, seeds can be embedded inside the foam polymer outer material. They would utilize the silt-rich floodwaters, and eventually provide shade for the home and also act as a source of food production. 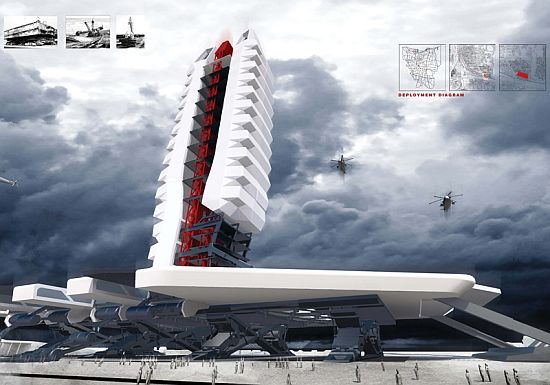 We’ve regularly reported about new designs that aim to provide sustainable residence to victims of natural disasters such as earthquakes and floods. Designers Adrian Ariosa and Doy Laufer at SCI-Arc in Los Angeles are taking disaster relief to a new level by designing a mobile skyscraper that can be deployed in cities like Jakarta, which could be underwater by 2025.

The plan, christened Transient Response System (TRS), features a residential area with 3-story modules that adopt an open program to accommodate as many inhabitants as possible with adequate air, light and space. The tower is deployed on a specially designed vehicle, which can be expanded and plugged into existing infrastructural systems.

The tower is raised as the base continues to expand and merge with the existing urban fabric. Once deployed, the structure is opened to the displaced residents. At the top of the tower are two wind turbines and a solar energy generator that provides energy to the tower and its base. Another system is employed to harvest rainwater and provide running water for the displaced residents.

Providing lodging facilities after a disaster is the most tiresome job of all. People living in such areas need much more than housing. They have been displaced from their familiar living environments and houses. In fact, this often traumatizes them. Felix Stark has developed a concept for emergency accommodation. This concept not only supports social interaction but also induces a sense of community by making people live close to one another.

The shelter, known as Sphere, not only protects people from extreme weather conditions but makes use of lively materials to reduce the stress one goes through after a disaster strikes. In addition, each Sphere contains 19 tent units, each of which can house three people. The partition walls can be opened to accommodate large families.

The inner layers are made from light, breathable material which maximizes daylight and protects people from harsh weather. The stakes are made from fiberglass and plastic. In addition, you can easily recycle the tents into other objects. Furthermore, you can also remove or reuse them in relief operations at a different location.