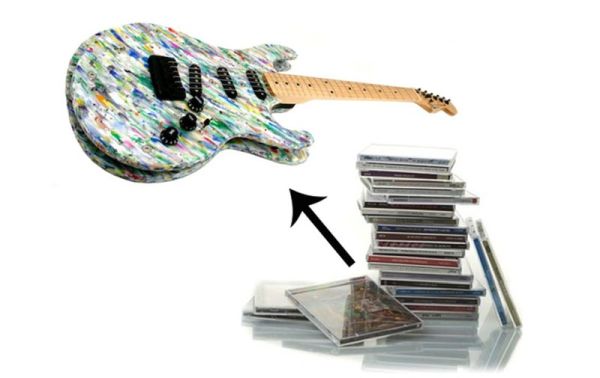 Music reflects our consciousness like nothing else. Therefore, it is no wonder that more than politicians, it is musicians that form our conscience. No matter, if is Bob Dylan, Fela Kuti, Marvin Gaye or Bob Marley, there’s no dearth of musicians who brought social and political issues to the fore.  However, there’s yet another aspect of the conscience of our musicians that must change. Right now, more than anything else, the world demands sustainability. Therefore, it is necessary that the musicians that influence us call for a change by opting for eco-friendly music instruments made from recycled materials. 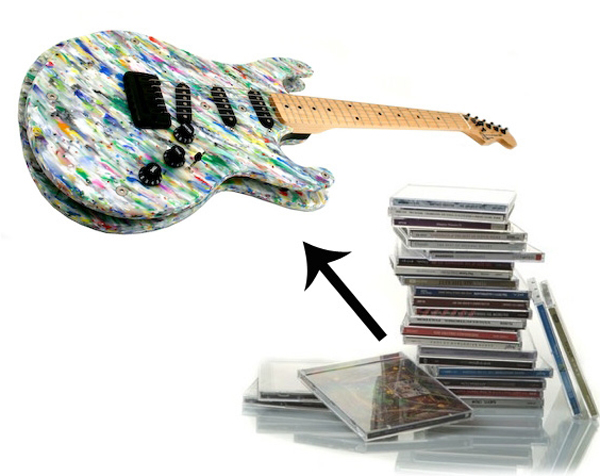 This dazzling guitar is crafted from recycled pirated CDs, which are seized by Trading Standards from unauthorized CD production facilities. These CDs are crushed and the substance is used to build the Simon Lee Recycled Guitar. In addition, the designer of the product makes use of half a dozen of other materials to produce similar recycled guitars. However, the one from confiscated CDs looks quite nice. 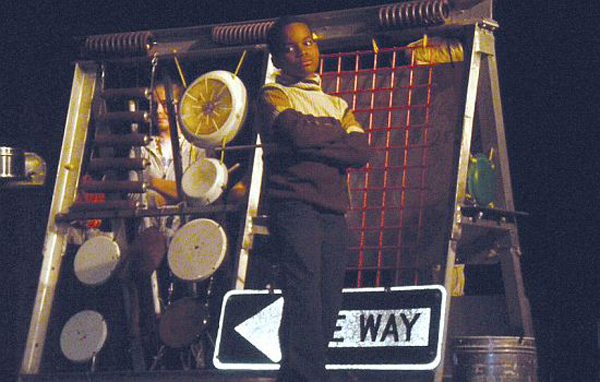 Musical instruments the students at the Applewild School in Massachusetts made from found objects are great eco-friendly products. Since the students didn’t have enough money to buy new and advanced instruments, they simply created what they wanted from rustic objects. Furthremore, they utilized trashed articles such as washboards, PVC piping, pans, pots, water jugs and others to craft a set of musical instruments, which produce exciting tunes and harmony. 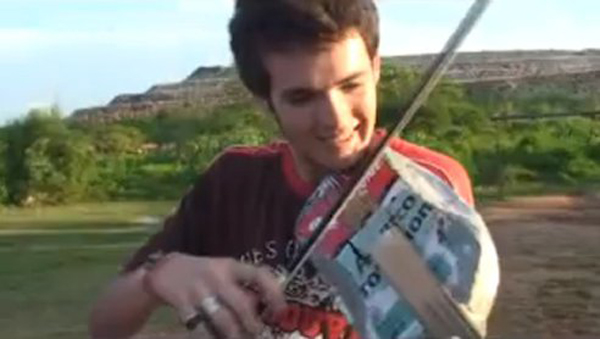 4. Symphonies and melodies out of junk 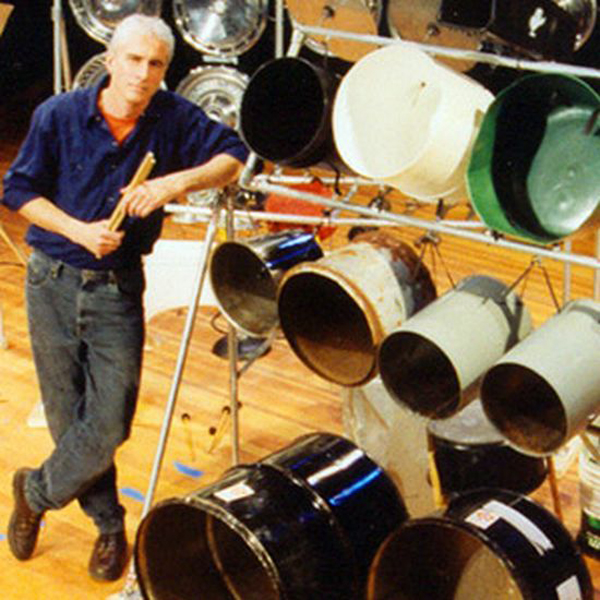 Junkman or Donald Knaack is a famous musician; but his reputation is mainly for producing music from salvaged trashes and junk. Junkman has released many musical albums with all of them composed of instruments recycled from junk. Furthermore, Junkman keeps up a passion to saving the earth and nature from junk. The musician started to recycle junk as music instruments as he was studying with the renowned composer John Cage. 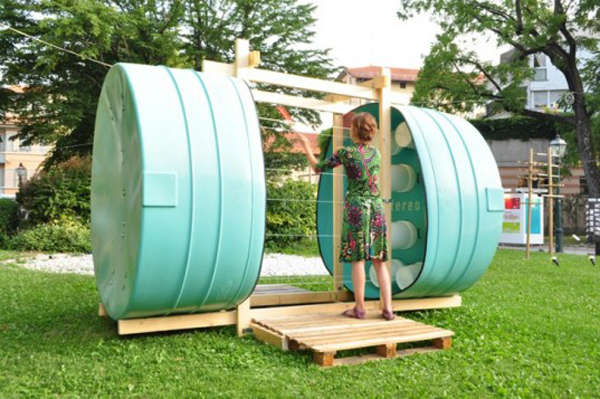 At the last year’s Zooart Festival in Italy, architects Marcelo Ertorteguy and Sara Valente presented a giant guitar, which was made in help of two big water tanks. Named Stereo TANK, the massive musical instrument has a set of 5-gallon buckets, a wooden frame and some rope besides the water tanks. Music from the inhabitable guitar is amplified by the tanks at both ends.

Brisbane, Australia-based designer Barry Faulkner is an expert in designing musical instruments from various recycled materials. The one you see in the image is an ordinary 6-string guitar, which is built from recycled stuffs. Faulkner has made use of fishing line to craft the guitar that has a piezo pickup also. Moreover, the designer has also designed various instruments using materials like fretless plastic fingerboard, old solid timber and ironing board etc… 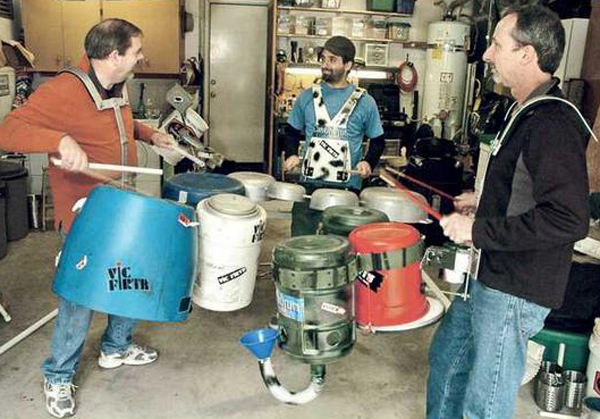 CanUnDrum is a popular musical troupe from Santa Clarita Valley. What makes this troupe unique is that they produce music from recycled everyday objects like buckets, pots, pans, PVC pipes and others. CanUnDrum was formed in 2004 and the team has been performing shows in various parts of the country. The group includes three drummers, who enjoy composing music from these types of recycled materials as they won’t make much impact on nature. 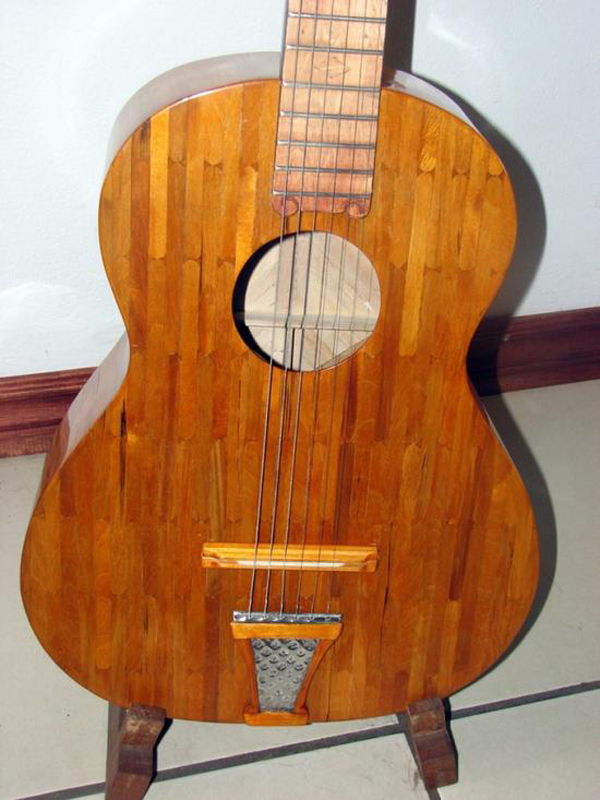 This is a guitar built of recycled ice cream sticks that we usually throw in some drain. Well, an unidentified artist has collected these ice cream sticks and designed this breathtaking product, which can produce music. The designer has worked 24×7 for around ten days to get this guitar designed from 4000 frozen sticks. In addition, the ice cream stick recycled guitar is pretty expensive. 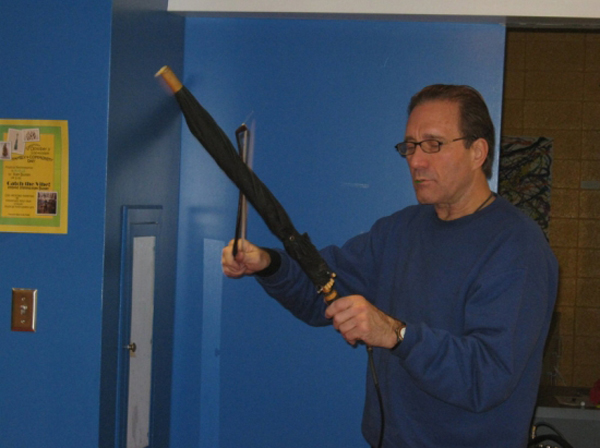 New York-based artist and musician Ken Butler is a passionate designer of musical instruments from trash. His wonderful instrument collection that he calls “hybrid instruments” at the Mulvane Art Museum is a thing of surprise for spectators. Moreover, Butler used to produce musical instruments from abandoned objects like hockey sticks, umbrella, hair clips, combs and much more. Most of his products are stringed instruments and they make use contact mics to amplify the sound. 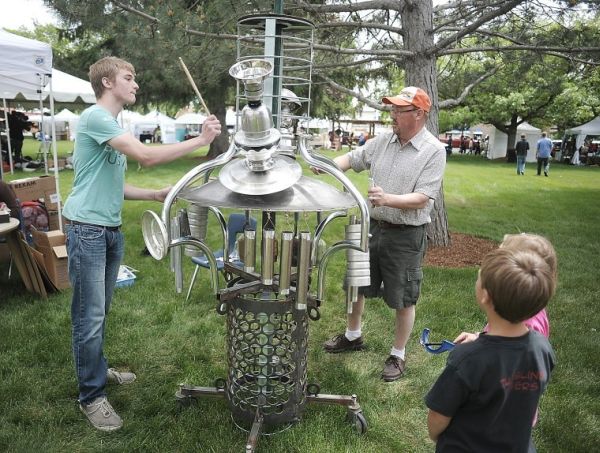 Being an art teacher by profession, Michael Bingham is an ardent designer of musical instruments from trash. Bingham and his son used to go out for a trash collecting spree to design wonderful musical instruments out of them. Bingham’s “Sound Sculpture” as he calls it is a combination of many recycled items such as kitchen bowls, umbrella base, legs of a table and others. Well, along with unique and melodic music, Bingham’s designs look quite fantastic as well. 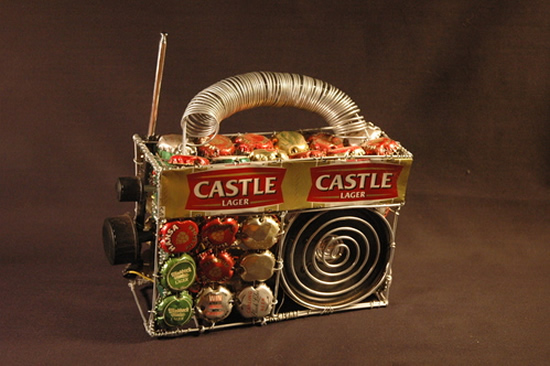 Who’s listening to radio? We all do! So lemme reframe my question. Who’s listening to green radio? And here I am not intending to the word green as a channel or color of your instrument. In my dictionary green implies to 3 Rs (Reduce, Reuse, and Recycle)! Someone on our planet in South Africa is actually jamming to music and hooking on to the latest news doling out of a radio made out of used bottle tops, cans and scrap metal. Beer cans and bottle tops make up the casing of this Recycled Radio and it’s held together by wire. Furthermore, with the antenna going up and down, the reception is believed to be just fine. 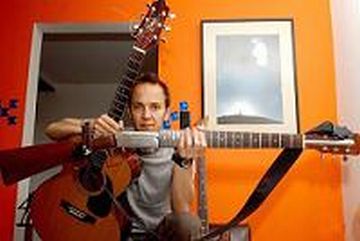 ‘Turning tools of death into symbols of hope… (literally)!’ Colombia’s peace process has given birth to ‘guitars’ from shotguns and AK-47s, which are reclaimed by adding polished rosewood, guitar frets and strings – creating distinctive instruments sought by musicians worldwide.

Luis Alberto Paredes — one of Colombia’s top musical instrument makers – has fashioned electric guitars from decommissioned rifles with the working parts wielded together for safety… as part of a United Nations program to promote peace.

Holding up one of the guitars which still has a Kalashnikov rifle’s distinctive, banana-shaped magazine, Paredes said,

“This used to hit a target at 800 meters (yards)… Now the target will just depend on the concert stage.”

Eco Bikes: Cadillac bicycle gets half the looks of a car and full bicycle functions