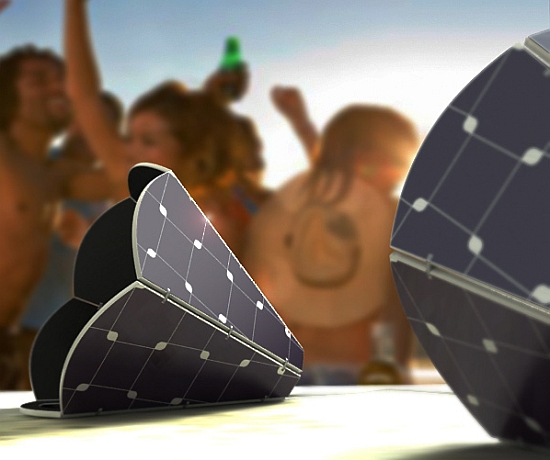 Mankind’s future would be best secured with a hastened transition from a non renewable sources based lifestyle to a renewable sources based one. This fact has been said many a times in the past and researchers have done there bit to aid this process. It can be said that the transition is rather slow at present. However, we also need to acknowledge that things are changing for good. Also, when it comes to environment, every small effort for its cause need to celebrated. In recent years, many designers have come up with brilliant solar powered speakers. Most of them are highly affordable and equipment designed for making the notion of ‘green music’ a reality.

Gramo speakers are an excellent exhibit of style and sustainability. Its outer surface has been equipped with three layers of photovoltaic panels, which recharges the inbuilt battery. This allows you to use the speakers even in the absence of sunlight. There is a soft touch sensitive control system for adjusting the volume. The portable speakers can be bent flat and carried in a pocket. Moreover, the green device is compatible with most of the music players, including iPod and iPhone. 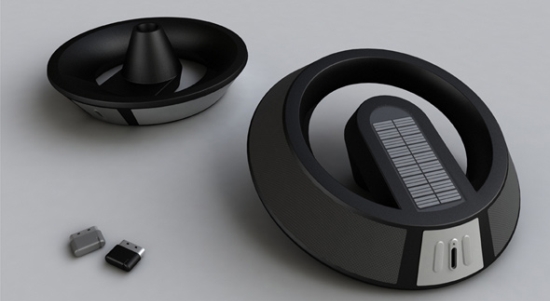 Designed by Ignacio Pilotto of Argentina, the Sunflower speaker concept is a wireless system best suited for outdoor purposes. It receives its strength through a solar cell, which absorbs the Ultra Violet (UV) rays emanating from the sun when put in its direction. These solar cells then recharge the inbuilt lithium ion battery. There is also an LED indicator, which shows the amount of energy left in the battery. 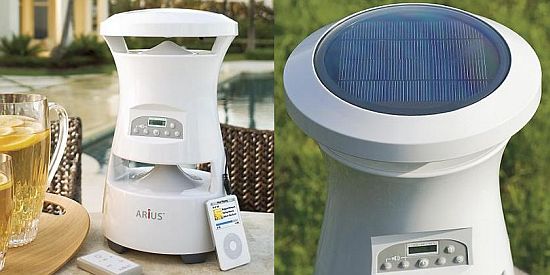 Developed by Frontgate, the Outdoor Solar Wireless Speaker is a device for all who do not take the environment for granted. It features solar panels, which recharges the inbuilt battery. The Outdoor speaker can connect to almost every kind of music transmitters such as iPod, CD/MP3 playrs, or TV and plays music with a crystal clear sound at the the hightest level of 150′ which can easily pierce through your walls. You can purchase this green device for $199. 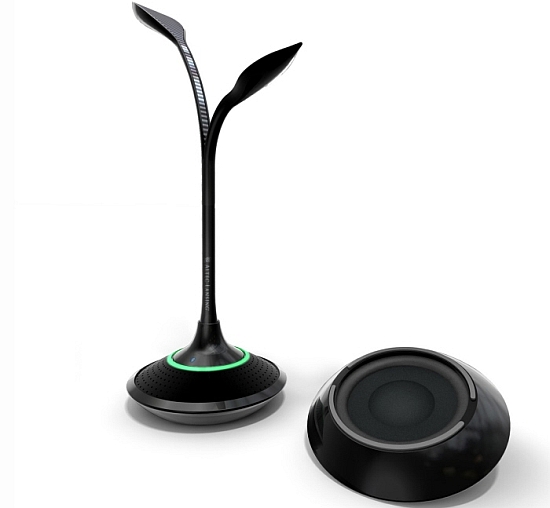 SunnySong is a solar powered bluetooth speaker system. It has been designed by Tryi Yeh. The green device has been uniquiely designed in the shape of a flower, which resonates with the natural process, harnessing solar power like the plants. The SunnySong speaker system is best suited for outdoor parties and meetings. It can be connected to all kind of portable music players. 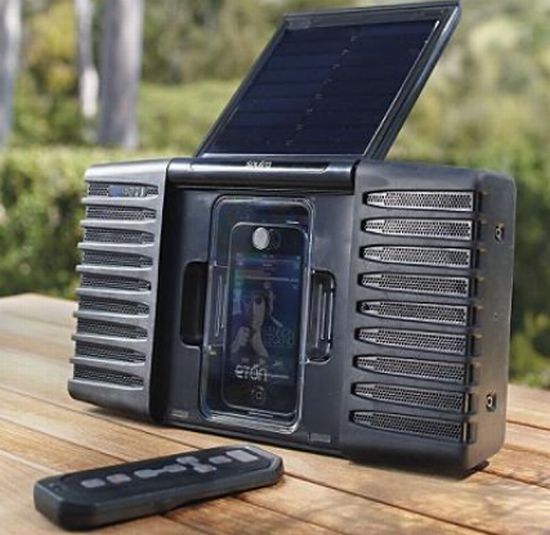 Soulra is a solar powered iPod speaker. It comes with a water resistant body, full range 8W RMS speakers, remote control and a lithium ion battery, which can be recharged with the help of onboard solar panels. The green device plays for seven hours continuously when fully recharged. It can also function as an iPhone. Soulra can be purchased for $199. 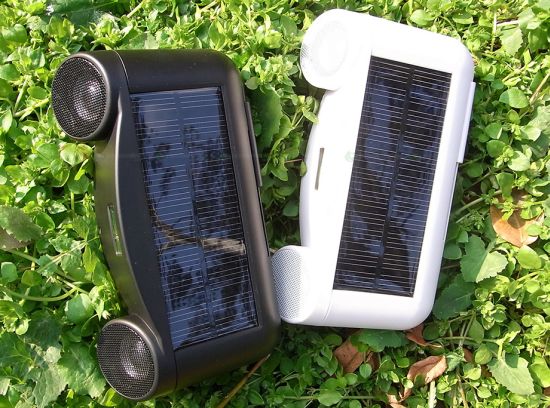 The Landport’s active speakers are equipped with onboard solar panels to recharge its lithium ion battery. When fully recharged, it can play for 5 to 8 hours continuously. The green device weighs 290 grams. You can also recharge its battery with household electricity by connecting the speakers to an USB terminal. The active speakers can be purchased for $59.

Developed by Regen, the Reverb is the costliest speaker of its kind discussed in this list. It is highly efficient solar-powered speakers which can play continuously for 20 to 40 hours when fully recharged. For this, it features integrated solar panels, which need to be put in the sunlight for 20 to 40 hours for a complete recharge.The green device generates sound equivalent to a common 60 watt speaker. You can purchase it for $2,300. 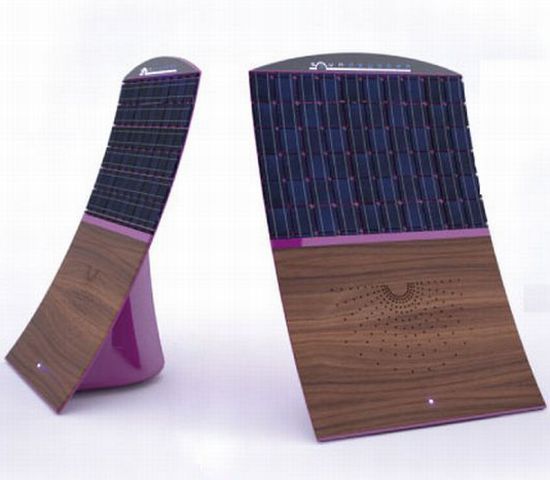 Designed by Paolo Metaldi and Luca Elli, the Sound System speakers concept is a portable and wireless way of enjoyinng ‘green’ music when you are at home or even outside. It features photovoltaic panels on the top, which recarges the battery required to play the speakers placed at the bottom of the device. It comes with an LED alert for showing the amount of power left in the battery. Moreover, the concept speakers can be customized with a variety of plastic covers and ergonomic handles.

Solar Sound System is powered by sun only 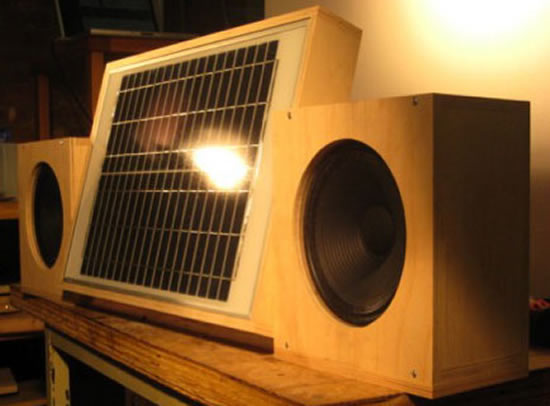 Named as Sola system, the solar sound system is a do it yourself (DIY) portable audio player. It has been made from very cheap parts including batteries and adapters. This make it not only environment friendly, but also easy on your pocket as a one time investment. The green device is best suited for use in situations where moderate volume level is required. You can also build this device at home. 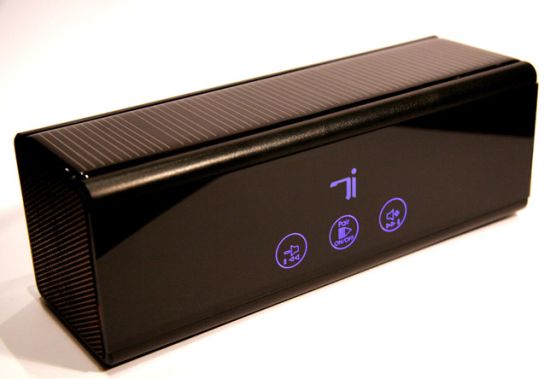 Solar Sound was one of the first solar powered bluetooth speaker introduced in 2009. Developed by Devotec, the device can be connected to other compatible speaker systems with the help of bluetooth and play music through double 2W speakers built into the system. It features an integrated 150mA solar panel, which recharges an inbuilt lithium ion battery that plays for four hours when completely recharged. 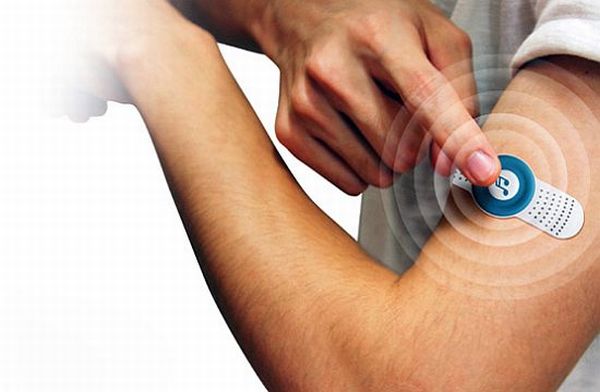