The students of Ajman would be experiencing a very new kind of school from the next year in April. Ajman is planning to open a new eco friendly school which would also include a farm consisting or organic components where students would also be trained and would have an opportunity to interact with nature from very near. Students would be able to get seats in Ajman from April. The launch of the ecological school was announced in the midst of a press conference which was held in Dubai on Tuesday.

Set up of the new school

The school is expected to be constructed over a 10acres land which would also include a 50,000 square meter organic farm with a greenhouse where students would be taught about plants, farming and other eco friendly components. The chairman of the school is Shaikh Sultan Bin Saqr Al Nuaimi. He is also the advisor to the undersecretary of the Minister of Economy in Ajman. The farming classes which would be taught to students would be part of the curriculum. Along with a farmhouse Dh50 million Habitat School also would consist of a small forest where students can get to know various kinds of benefits of medicinal plants. The fruits and vegetables which would be produced in the organic garden would be donated to the charity to encourage charitable work among students. 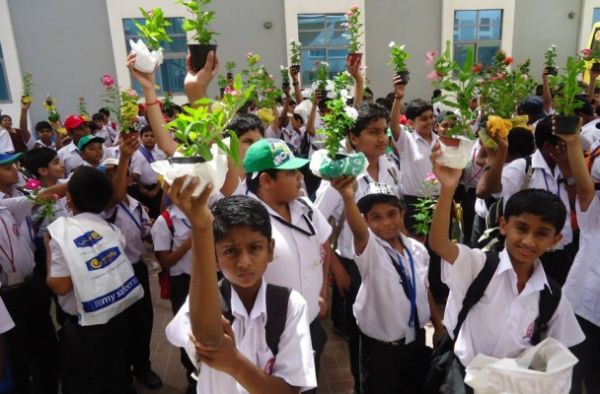 The facilities given in the schools

Shaikh Sultan said that the school would have the facility of electricity and water preservation and by this means obey with the government’s move towards green buildings and global green. The school would teach environmentally friendly students to grow up as future leaders. It would also help private schools in their venture. The academic director of the school is C.T. Adil. He said that the school would have six second language options for children to choose from ranging from Arabic, Hindi, Urdu, Tamil, Malayalam and Bengali. There are also options of enrolling in the day boarding facility which would be ending at 4.30 PM.The fee structure has not been decided yet as it has not been approved by the government. The lower class families would have enough money to pay for the fees. There will also be school bus service to the school from Dubai, Sharjah and Umm Al Quwain.

Ajman in Dubai would be opening a new eco friendly school from the nest year in April which would consist of organic gardens, greenhouse, small forests which would teach children the benefits of plants and their values.