Biomimicry is the best way of studying nature and using it to solve the problems of mankind. It is a realistic approach and has worked wonders when replicated. Recently, designers Xi Chen and George Whitesides came up with an improved version of ‘Soft Robots’. The design and the working of these air powered rubber robots is inspired by creatures such as snakes, squid and worms. 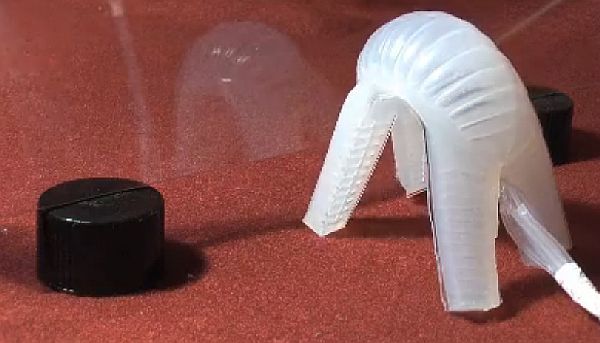 The new soft robot is made up of wire mesh, fabric, rubber and paper. These materials will help the robot to bend, twist, and grip. Completely powered by air, it can lift around 120 times more than its own weight. The best thing about the new version of Soft Robots is their flexibility, which makes them useful for tight spaces.

The performance of the soft robot is directly correlated with the feat of origami. To demonstrate this, the researchers showed how a crinkled clump of silicon soaked paper, when folded in the right way and glued in the right spots, can lift two pounds of weight, roughly twice as powerful as human exhalation.

They also have specially designed cylinders that inflate into spheres and tubes, acting like springs and compact stacks, which turn into rigid ring like structures. According to researchers, addition of wire and electronics in the future will make the robots more efficient. Many military organizations are also fascinated by this technology and aspire to use them as spying devices.