What’s the benefit of going eco-friendly by buying electric cars if the electricity that you utilize comes from non-renewable sources? Indirectly, you would do the same thing. Therefore, switching to electric vehicles isn’t all we should do. In addition, we should also make sure that the electricity that we utilize for our vehicles comes from renewable sources. Right now, there are plenty of energy sources that come under the tag of the renewable source. Nevertheless, there are only a few, which are feasible at present. Even out of these, solar energy is the most reliable. In fact, it might even become mainstream in the near future. So, the most eco-friendly way of charging your eco-friendly vehicle is by opting for solar-powered charging stations.

The battery-powered car or electric vehicle holds promise for weaning the world away. They might save us from the gasoline-burning engines which are causing over 2300 million tonnes of CO2 emissions per year. General Motors’ Chevrolet Volt and the Nissan Leaf electric cars have made impressive debuts. This reflects in their sales, which are increasing from 15,000 to 20,000 units in their first year. Furthermore, these companies are also planning to increase the output to 50,000 cars in 2012.

Other EV manufacturers are also on the scene. These include the hybrids such as the Toyota Prius already hold an impressive niche. This would drive the utilities to dot the highways and city roads with battery charging stations, much like we see gasoline pumps all around.

Several companies have proposed solar powered battery charging stations. These could help to avoid dependence on utility power for EV charging. Besides addressing the EV recharge issue, the deployment of these solar charging stations would foster wider adoption of photovoltaics. It would also reduce cost while improving efficiency. 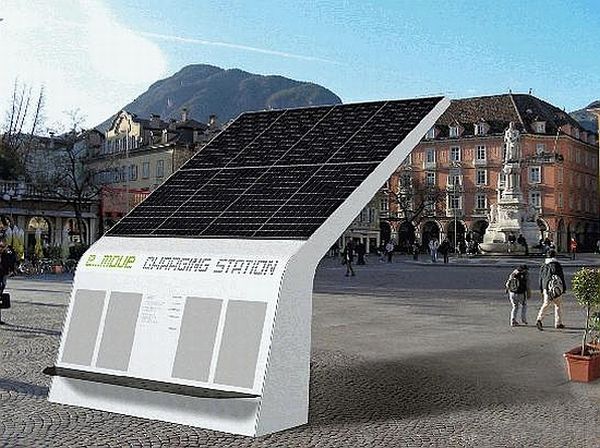 This eye-catching structure is the brainchild of Michael Scherer for the entrepreneur Valentin Runggaldier. The reason behind its design is to recharge not just EVs, but also electric scooters, power bicycles, and even laptops and mobile phones. The main idea behind this structure consisting of IPE beams is for maximum solar power generation. It would utilize the eight monocrystalline photovoltaic panels on it for that purpose. The PV panels generate 1.76KWp of power which translates to over 2000KWh of power per year. The base contains the power inverters, switchboards, and transaction electronics panels.

The structure routs to the ground on cement plinth. Furthermore, it also uses eco-friendly design and materials. The user pays for the power through a credit card or through a cell phone. The mobile phones and laptops charge outside on a bench-like platform. It is free of charge to popularize the concept of solar energy. In the night, the charging station becomes a luminous urban structure.

Based on experience from the first installation, Valentin Runggaldier hopes to sell this charging station all over Europe to car rental companies, municipal authorities, and even to corporate car parks of companies that wish to encourage the use of EV cars. 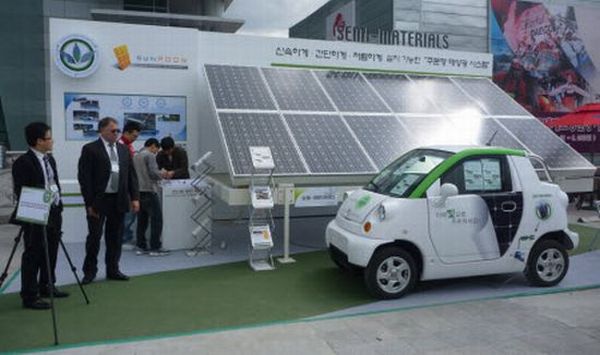 Sun Pods Inc., of San Jose, California has announced the first factory built solar charging station. It can be installed and commissioned in a matter of hours instead of weeks. It is made up of 12 solar panels mounted on a galvanized steel frame that can produce 2.4 kilowatts of power. The panels are self contained with the wiring and electronics and is easy to interconnect. The structure is self standing (or can be anchored to a wall) and does not need site preparation and construction work usually associated with a solar charging station. The solar charging station measures 20 feet wide and 10 feet high, and weighs about 3000 pounds. It can be delivered on site on a single truck trailer.

Priced at about $14,000 for the PV panels and an additional $3000 for the vehicle charger, Sun Pods is targeting fleet operators like municipal or postal authorities besides owners of parking lots, at shopping malls and so on. An additional target market is for applications like golf carts, fork lift trucks, and such materials handling equipment besides places like airports, rail, and marine stations. The company hopes to sell 5000 stations a year. 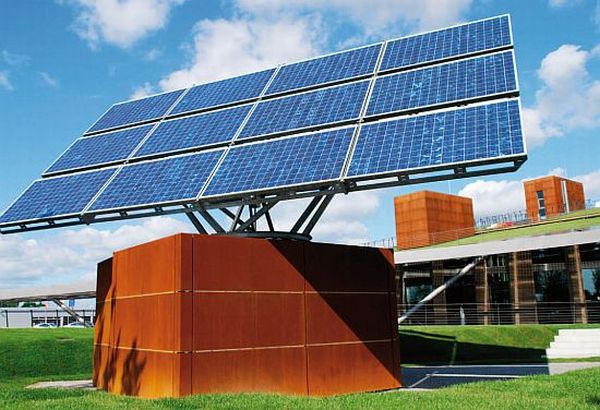 Younicos AG of Berlin, Germany has designed this solar charging station with some innovative ideas. The 12 module solar array is mounted on a tracking stand. This tracking stand tracks the sun to harvest some 40 percent more solar energy than fixed solar arrays. The 10 KW generator is stored in a Vanadium Redox flow 100KWh battery. It does it in such a way that the solar energy is available even at the night and on cloudy days. The Yana docking station, as it is called, can charge up to 8 vehicles at a time through intelligent connectors. The connectors are provided with a GSM based communications link to an external agency that bills the customer. The Yana has also been designed with illuminated advertising panels to generate additional revenue for the installer. 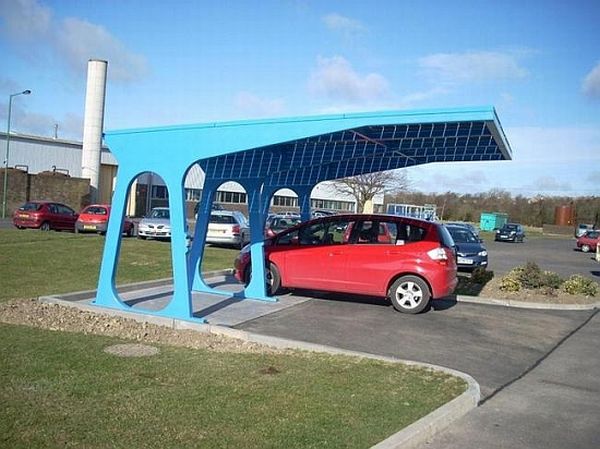 Romag the Durham, UK based manufacturer of photovoltaic glass panels has developed this carport. It houses PV panels on the roof to recharge an EV parked below. In addition, since cars are parked for a long time at home or workplaces or even on errands like shopping or entertainment, the ability to “top-up” the charge when parked would be a good added advantage to the wider adoption of EVs. The Romag carport is less elaborate than the one by Envision that is partnering GM to install charging carports in the US. 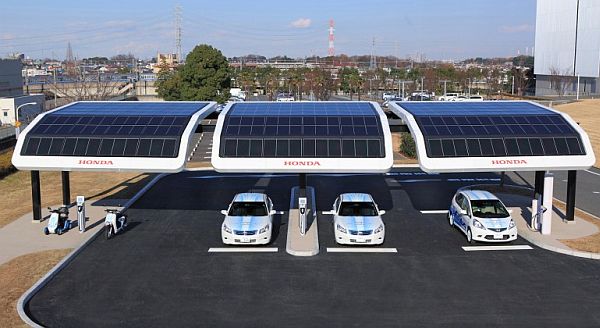 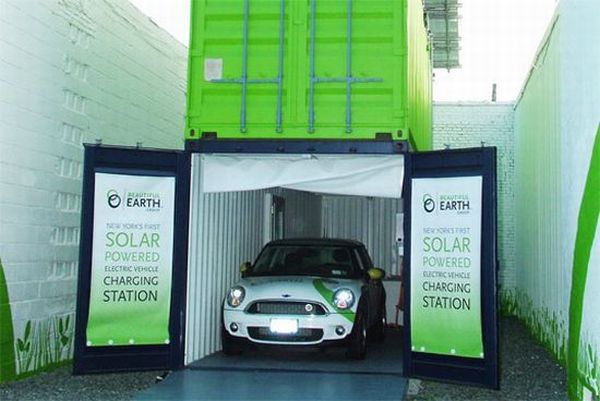 The Beautiful Earth Group of Brooklyn, New York that gifted the solar charging station to the Brooklyn Bridge Park. It had first installed it in an industrial lot in Red Hook, Brooklyn. Furthermore, to illustrate the modular concept of its design, the company used standard components, PV panels from Sharp, recyclable batteries from Trojan Batteries, inverter from Outback Systems of Washington, mounted on a rack from Unirack, New Mexico and the whole structure on recycled shipping containers. In addition, the solar charging station demonstrated that it could charge an EV like the BMW mini E in 3 hours and it can travel a distance of 100 mile. The BE group also demonstrated that the charging station could be dismantled from one location and reassembled at another location to establish a portable charging station. 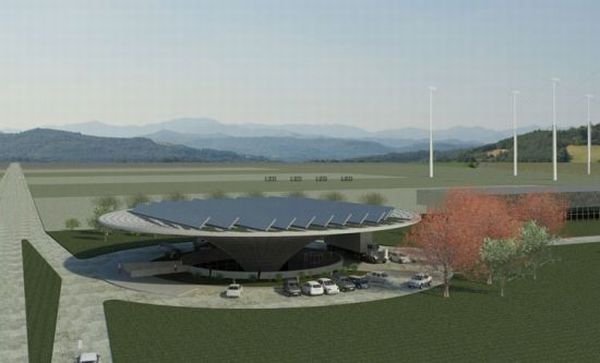 With the expected wider adoption of EVs in the coming years, there would be need for roadside battery recharge stations like the gasoline stations that we see all around. The Israel based architectural studio Geotectura in cooperation with Malka Architects has conceptualized this “Green Gasoline Station“. It would harvest solar energy from roof-mounted panels. Furthermore, it would charge vehicles at recharge poles, under its beautiful canopy structure that is open on all sides. In areas with sufficient wind velocities, there could also be wind turbines located on the roof. The service area and a cafe are located underground. 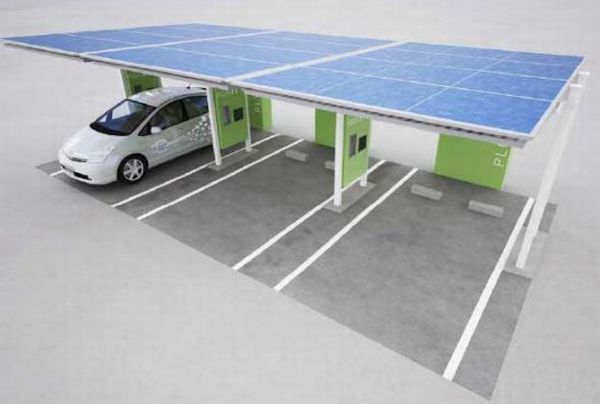 To encourage employees to shift to EVs, many corporates are installing EV charge stations. This installation is in Toyota city in Japan, which houses the car manufacturing plant as well as housing for many of its employees. Each solar charging station produces 1.9 kW of power which is stored in a 8.4 kWh battery pack. The station is additionally connected to the grid to provide for days of low solar generation. 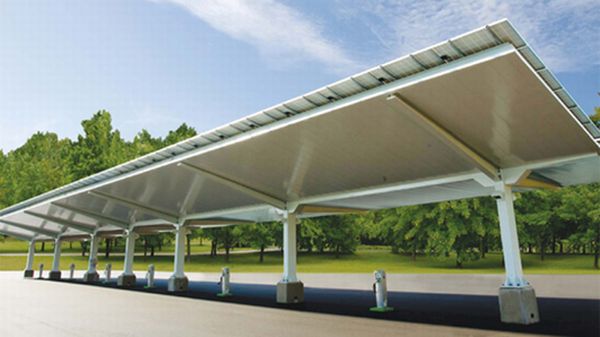 GE Industrial Solutions unveiled this first carport at its Plainville, Connecticut facility with solar photovoltaic panels on the roof feeding power to the EV chargers on the ground. This design will extend to cover a 500 space car park that will eventually generate 1.6 MW of power. The solar car park will connect to the grid to export power on sunny days and to import power on other days. 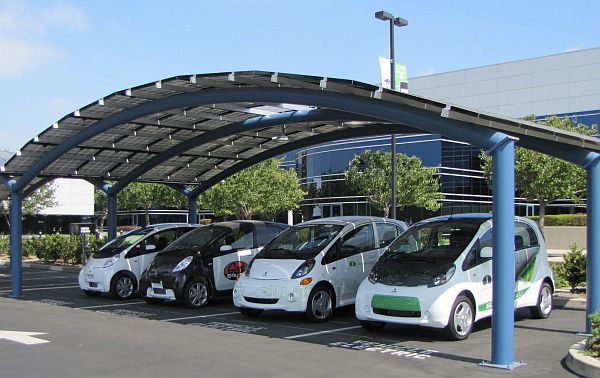 Mitsubishi Motors North America in partnership with Mitsubishi Electric has unveiled this EV charge station at its Cypress, California headquarters as a demonstration of what their dealers will have to install for the launch of Mitusubishi’s Electric Vehicles in November 2011. The twin arch design by the company California Green Designs supports 96 high efficiency PV panels each of 175 watts, made by Mitsubishi Electric. The solar power is fed to three types of charging stations developed by the Eaton Corporation. The Level 1 charger delivers full battery charge for a new vehicle in 22 hours, the level 2 charger provides a 6 hour recharge and the level 3 charger a quick 25 minute top-up to 80 percent of battery capacity.