Ever thought of using water to power cell phones or other gadgets? Water flowing through the taps or stored in some container providing the much-needed succor to discharged gadgets could appear as to be a distant dream to so many. However, there are frequent instances or concepts that suggest that such possibilities can never be ruled out. Here we have enlisted 10 such gadgets that rely on water for sustenance: 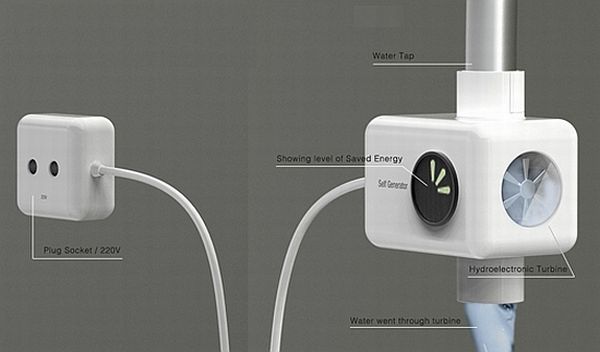 Mini Hydro Turbine, Jin Woohan’s creative model, is a mini water turbine that relies on hydraulic pressure to generate electricity. This electricity is enough to charge cell phones and other portable electronic gadgets. This electricity can be used by connecting the turbine directly to the unit or to charge batteries.

Eco-Electric: keeping a check on domestic consumption of water 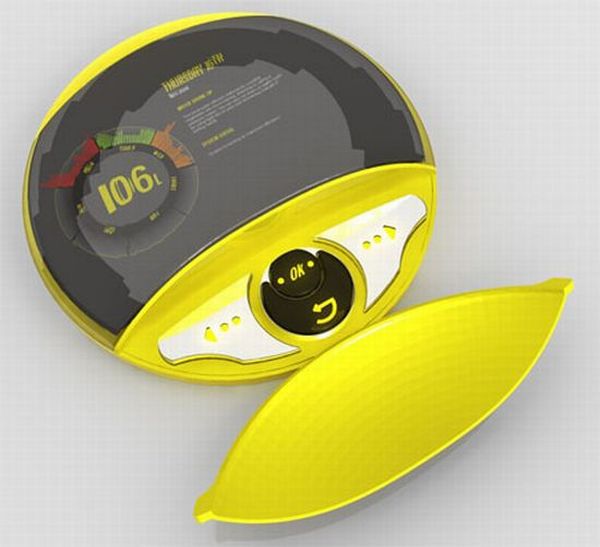 Keeping a consistent check on one’s own water consumption is an initiative towards the challenging task of water conservation. Eco-Electric is a stylish ergonomic device that monitors the hourly consumption of water in a house. The meter readings enable the consumer to keep a check on oneself. This device also has an additional feature of generating its own power. 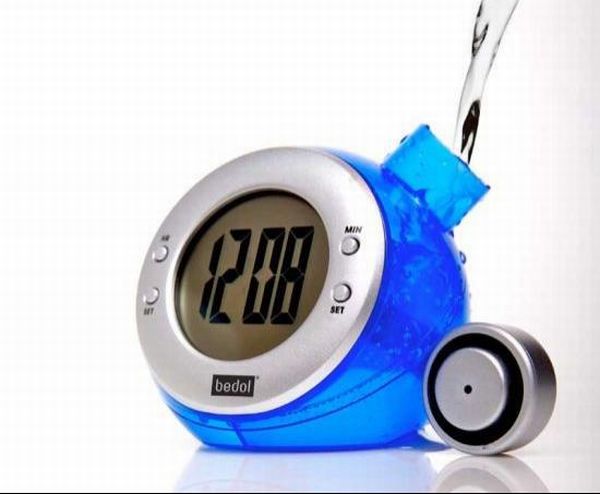 Simplicity is the essence of beauty. Technology coupled with elegance makes the eco friendly Bedol Water-Powered Clock unique. This circular digital clock does not run on batteries, but on water. It fits well anywhere in a room or could even be the center of attraction on a table. It comes in several bright colors to match with any wall. With an innovative eye, Bedol International Group seeks to make routine stuff look trendy by just turning them around. 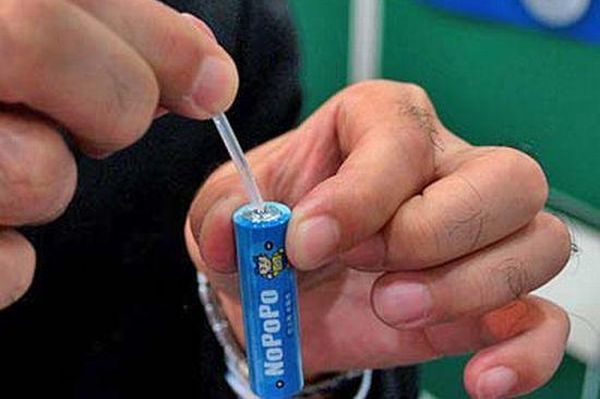 Aqua Power has a different approach towards charging batteries. When batteries run down and chargers aren’t accessible, an innovative combination of water and urine is enough to charge AA and AAA+ up to 500 milliamp-hours (mAh). This liquid mix catalyses the magnesium-aluminum reaction to generate the necessary power. These batteries are dubbed the NoPoPo. As of now, these batteries are available only in Japan.

POWA – Power and Wash for the car 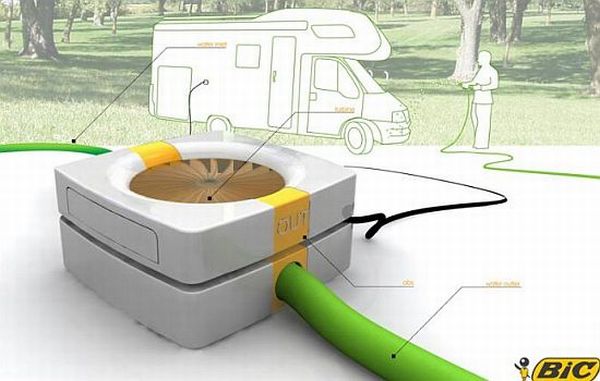 What if water had a dual purpose of cleaning the car and recharging its batteries? POWA – a turbine designed by Gregoire Vandenbussche is placed in the hosepipe used to wash the car. The blades of the turbine turn and generate electricity to charge the car batteries. This easily cuts down on ones bills as well!

Water-run calculator is an innovation worth a watch. An electronic device that needed to be kept away from water can now be made to work using water as a source of energy. Water can be stored in its battery for three months just as in inverters. This water rechargeable calculator is surely a step towards going green reducing pollution form lithium batteries and other hazardous chemicals.

Not just a flashlight but also a lamp; the NoPoPo Mini Lantern and Flashlight Set is a 2-in-1 device that could be used not only as a flashlight but also as a lantern all by just sliding the cover up or down to change the mode. This eco friendly device runs on water making the battery rechargeable anytime anywhere. The included syringe could be used to suck water into the battery before placing it into the mini lantern and switching it on. This battery, 9.65×2.75cm (3.75×1.08 inches) in size, is proprietary of Aqua-Power Japan. The battery holds up charge up to ten years. Beer, shake, cola or urine could also be used as alternative to water.

TubeBot – A robot that monitor leaks in water pipes

An innovative robot that functions on the power of water, the TubeBot, is an invention by Kaunsthochschule Berlin. It is able to detect defects and breaches in the water pipes underground. It scans a length of the piping system and the data is sent to a remote location. The spot of breach is identified and rectified opening only a comparatively small patch of land. This reduces time, labor and inconvenience to people and traffic. The robot is able to function without using even a single AA battery. It generates electricity from the water pressure that enables it to keep moving. On the flip side, it is able to identify faults in pipes that leave the water station and not the smaller pipes that extend from them. 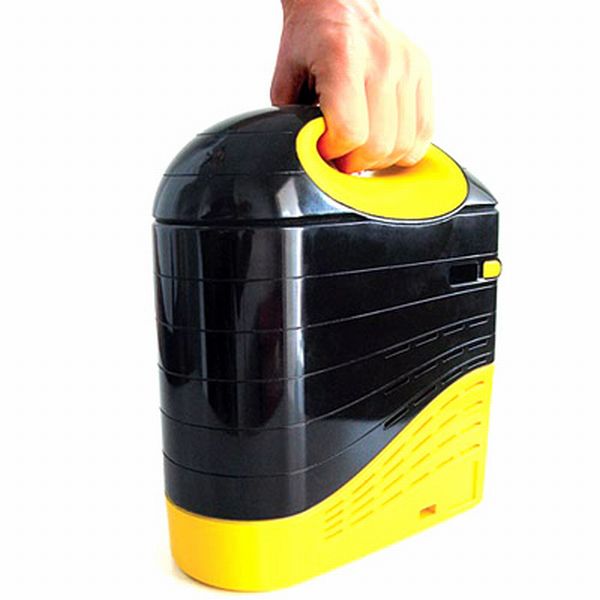 The new HydroPak generator by Millennium Cell and Horizon Fuel Cell beats the heavy traditional models in cleanliness and efficiency. The water-activated, portable power product that uses $20 disposable cartridges for recharging an average notebook PC at least 8-10 times or operates these low power devices for more than 14 hours continuously through AC outlet or dual USB jacks. The HydroPak Mini, a $400 unit, is a smaller prototype of this design to power smaller devices such as cell phones or gaming consoles. 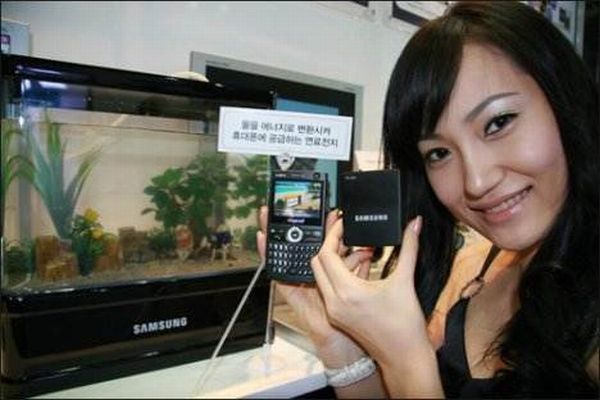 Water-powered cell phones were initially a creative idea which came into existence with Samsung developing one. The micro fuel cell and hydrogen generator that run the cell phones are charged for about 10 hours using water. Initially hydrogen cartridges that needed to be changed every four days could be used for powering the phone if it was used on an average for four hours a day.