The emergence of the super-yachts began in the beginning of the twentieth century, when many private owned yachts became a growing rage with the super rich. This opulence naturally became an interest for the press to highlight its popularity. These super-yachts began to appear in magazines which again highlighted the industry boom of these yachts. In the present day, there has been a massive growth in the popularity, size and growth of these luxury yachts. Some of these are operated as charter yachts for businesses and some are available for part time charter but privately owned.

The need to combat pollution emitted by yachts has become a technical challenge, which has brought about a focus on the efficiency and less polluting mechanism of the yachts. In this light, yachts are now being given a new touch with advanced exhaust after treatment systems to reduce harmful atmospheric emissions. The grey water from yachts are the major pollutants so treatment systems are being promoted. The fuel system is also now being given a new technical makeover. Instead of the oversize gensets for back-up, every liter KW of diesel used is stored in the lithium ion battery banks to be used when load peaks. These hybrid engines apart from reducing pollution also increases the efficiency of fuel.

This is the first megayacht which can boast of zero emission of carbon pollutant as it uses solar energy, the first in the world. Touted as the first ultra green yacht, this 60m solar hybrid from Sauter Zero Carbon Diesel, is the latest in the terms of luxuries and speed. Featuring advanced aerodynamic and hydro design to harness wave, wind and sun energy, it has a 17 KTS speed capacity. With tall wing-sails it has greater generating thrust while reducing less drag.

The founder of this mega yacht believes that this unique carbon neutral approach will reduce carbon footprints. GHG emission is reduced by 75 to 100 percent with the regeneration of power sailing wave motion, multiple diesel electric drives supported by rotational wing-sails, UPS back up and a massive solar cell array.

While it has its unique merits, it is felt that GHG emissions in super-yachts is not necessarily reduced by purchasing of Carbon Offset Credits for projects in the developing countries.

This latest green hybrid runs on energy harnessed from the wind, waves and sun and designed to reduce carbon footprints. This is a 44m solar hybrid yacht with Sun Power solar cells, automated auxiliary Sky Sail with an 18+Knots drives and GM ESS2 batteries charged by KER and energy waves through a new form of ATMD of motion dumping regeneration. It has the most advanced power engine form Daimler Turbo Compound BueTec.

With the aim of reducing 50 percent in fuel consumption and carbon emissions, this hybrid has a 360+Mwh’s feeding capacity of electricity to the grid, for up to 12,000 nautical miles annually.

As compared to conventional super yachts, it is still very competitive in terms of operation, features and cost, despite the zero carbon and luxury offered.

This has been conceptualized by Astheimer Ltd as a low emission super yacht with electric engine powered by solar panels and propelled by a hybrid engine. It has a sculpted super-structure with spacious layout featuring an explorer type hull and fluid on its 75m form. It has a real tree fed through continuous Osmosis in the atrium. It also features a 360 degree view raised helm.

The capacity of solar powering and low emission of carbon footprints have not been fully utilized, given the fact that it is still under study surveillance. 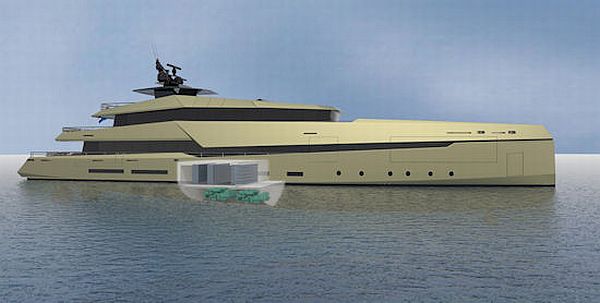 This is the first hull super yacht from Ghost Yachts together with Imtech Marine & Offshore and the Italian Gloss Design towards creating efficiency, sustainability and innovative genius. It has the required efficiency with a relatively modest propulsion power in its Fast Displacement Hull Form. The smart hybrid systems from Imtech and the revolutionary FDHF together combines for an efficiently sustainable operation. It is propelled propelled by two new electric propulsors each of 750 Kw capacity. This eliminates the need for propeller rudders and shafts because this hubless steerable pods are integrated with electric motor. It has a 15.5Knots speed for cruising and 13Knots passage speed for over 450nm.

The G180’s windows are coated with a ceramic film to block out 80 percent of the sun’s infrared light which will reduce power requirement for fan coils and chillers. Its interiors also requires less energy from the HVAC system and the use of LED lighting extensively keeps minimum power consumption in view.

At the moment it is still under survey study for its performance but so far, fuel consumption shows reduction by about thirty percent.