Long believed to be signs of divine disapproval, volcanic eruptions have been documented for millenniums. With the advancements in technology helping people become more aware of the earth’s internal mechanism, researchers figured out that these fiery mountains could be tapped for producing geothermal power. And that’s not all as El Diablo, a restaurant located on the Spanish island of Lanzarote, is using the heat released by an active volcano to cook food for the visitors. 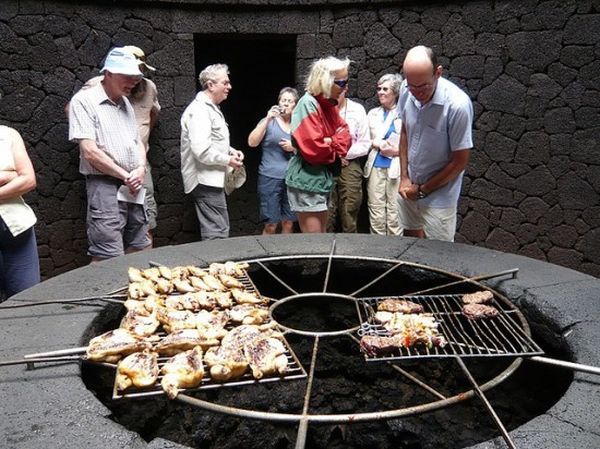 The volcano isn’t a lava emitting mountain, but is like a hole in the ground, through which heat escapes from the scorching depths of our planet. Before the restaurant was built, visitors were served a plate of sardines with wine. However, in 1970 Cesar Manrique took help from architects Eduardo Caceres and Jesus Soto to build a complete restaurant, in which a giant grill had to be placed on the ground that used the sweltering heat to cook varied delicacies consisting of meat and fish.

As you can well imagine, constructing the grill wasn’t as simple as placing a mesh of metal on the stove, and the problem was solved by laying down nine layers of basalt rock to serve as the foundation for the structure. The restaurant now serves traditional Canarian food and offers spectacular views of the surroundings.