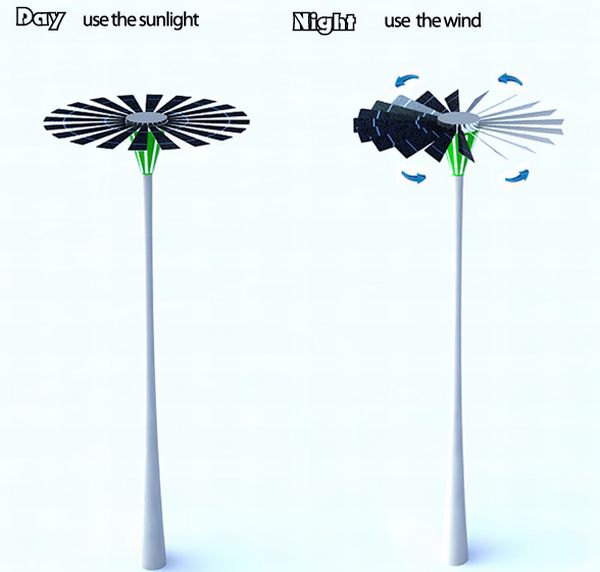 Revolution takes place when evolution stops. The same is happening today. When human activities have put a stop to the natural process of slow biotic and abiotic evolution, an enlightened section of the society has started whispering the musical voice of revolution, a revolution that would change the very way we look at nature, its resources and its possessions today. We have enough exploited and now, the exploitation has to get over. Ways to end it are coming slowly and steadily. The most prominent way to bring it about is to use renewable resources, resources which would never end till the end of the world, atleast that would give a lag time for the quick deterioration of the earth. Talking about renewable resources, the two of the most easily available ones are solar and wind energy. But there is one shortcoming in each of these, sun sets at night and wind energy has less potential during the day, being in its fullest form during nights, when barriers to the easy flow of wind generally settle down and the speed of wind increases. What a miracle would it be if both these shortfalls could be converted into strength! How would it be if there was a device that would run both on solar as well as wind energy! Well then, the pious wish has been granted. Such a mechanism has been designed by a thoughtful Korean designer Dae Yong Kim.

It is a very beautifully and thoughtfully designed creation. The Solar windmill is actually a pole with solar blades attached to its upper brim. These blades are clad in solar panels and hence have the capability to capture sunlight during the day and convert it into energy. The novelty is, these blades are movable at the hub where they are attached to the main pole in such a manner that they can rotate by force of wind. Each blade is also conferred with the ability to tilt by an angle of 45 degrees. So, when the sun sets, these blades automatically tilt by half a right angle. This makes space for the flowing wing to generate a push within the blades in a circular tract. So, these solar blades start rotating with an effect that wind energy is generated. In its entirety, the whole thing looks like a flower with petals looking up at the sun and drooping down at sunset to flow with the wind. Another spectacular arrangement is the conversion of the conserved power into electricity. The place where the blades are attached to the pole contains this mechanism. From a distance, it would like the green cup that holds up a bud. This inverted pyramid structure is fitted with lights which are powered by the captured energy. The lights get switched on when the sun falls. The question is, if at all the lights get powered by the sun, why is the wind energy needed at all? The answer is, even if the solar energy is somewhat low during a cloudy day, the light won’t go blank in the absence of a recharging unit. It could recharge itself by using wind energy.

The most apparent advantage is that the concept is entirely new and seems to be applicable in practicality. It would not take extra costs as is the case when solar and wind units are installed or set up separately. Secondly, when these two are separately installed, each of them lacks the strength which the other possesses. It is an excellent idea to combine two things and create something that has the better parts of both the components, it almost becomes a hybrid.

Anyways, when the design is completed and is available in a marketable form, it is sure to be accepted by all eco freaks with a grand welcome. Today whatever thought is being churned out in the direction of environmental welfare, is priceless.This thought would be beneficial in the long run. Today, the only idea of constructing the solar windmill is showering light. Tomorrow, the idea might become such a success, that entire mills would be created keeping this idea as the principle. Cities could get lighted without using any other source of energy at all, if it is a success. Probably that day is not very far away when coal, petroleum and nuclear would be the things of the past. The sooner this verdict gets true, the better it is for the entire humanity. We really wish that the design of solar windmill gets a hit in the markets.