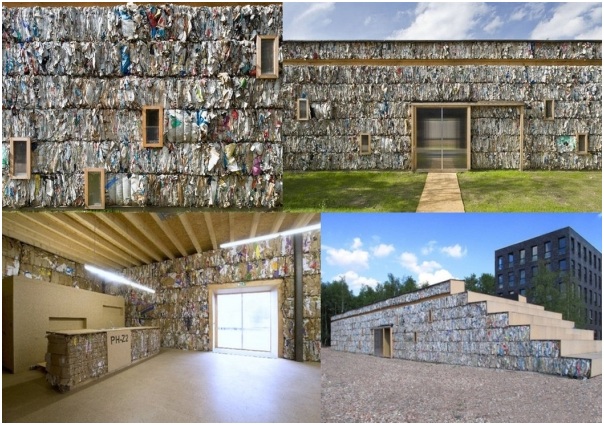 Paper has long been recycled into items of daily use like furniture, stationary and wallpaper and even jewelry. Discarded paper has even been used to create bricks that can replace wood logs in domestic fireplaces. However, paper hasn’t yet been used to serve in the construction of building though all that could change very soon. Berlin, Germany based architecture firm Dratz&Dratz Architekten has used over 550 bales of recycled paper to create a temporary workspace spanning 2,045 square foot.

The brainchild of design Daniel and Ben Dratz, the space came into being after the designers were commissioned by Zollverein School of Management and Design in Essen to create a new workspace. The $200,000 grant required the designers to construct a building onto a UNESCO World Heritage Site which also happens to be an old mining locale.

This meant that the construction needed to be as green as possible while being as lightweight as the designers could possibly make it. Apart from being eco friendly and uninvasive to construct, the building also needed to be able to withstand high winds and hard rain that the region experiences. Even though bales made of recycled paper appear to be relatively flimsy in comparison to concrete or clay bricks and woods, the designers were convinced that these can provide a sturdy yet lightweight material that can be used in the construction of buildings that can weather stern climatic conditions.

The designers explain that the idea to create a building using recycled paper bales came to them entirely by chance. The inspirations struck the brothers as they were passing by a recycling station and spotted a bunch of recycled paper bales sitting there. Upon closer examination, the designer duo found that the bales could serve as a viable construction material since they were greatly compressed and could even be used in the formation of walls that can potentially even support a roof. To create the structure, the brothers sourced all their unusual material from local grocery stores. The paper was recycled and compressed to create thick and sturdy bales.

When stacked in a monolithic formation, these bales could provide a well insulated wall that was still susceptible to getting wet and absorbing some water during the rains though it dried up surprisingly quickly when the sun came out. At the moment, the designer duo have found that these bales can easily be stacked to create walls that stand as high as 100 feet though further research needs to be conducted before these are used on more challenging and permanent creations. There is also the need to make these bales more photogenic though that problem may be easily addressable by the addition of an ink or dye during the recycling process or even a coat of paint after the structure is finished.