In July, Formula Society of Automotive Engineers (FSAE), the biggest educational motorsport competition will be held in United Kingdom. The aim of the competition is to promote excellence and careers in engineering by challenging the students of universities around the world to compete, build, design and develop as a team. Accepting the challenge, for the first time a team of thirty students of Indian Institute of Technology (IIT) Bombay, is designing an electric car for this international competition, which will compete with 109 cars at the Silverstone Formula 1 race track. For these students it is like a dream come true to race at the famous F1 circuit, and compete in the FSAE. 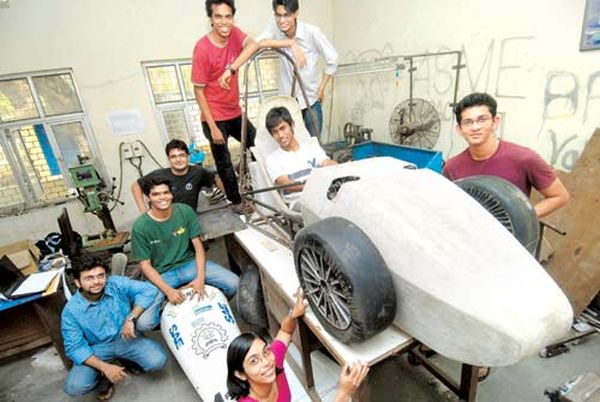 According to Urmil Shah, mechanical engineering student and captain of the team, the car will be powered by electricity that is a green sustainable technology. In 2009, chip powered car was designed by the IIT Bombay students, but this time they are trying to develop an electric car that will be powered by lithium polymer batteries. They are the first group to make such cars so it is expected that they build and design a world class car for FSAE.

In US, the weight of racing cars is around 220 kg, but this car weighs 300 kg i.e. 80 kg more than the formula cars that have won the FSAE so far. The car can reach a speed of 60 Km per hour in just 3.5 seconds and has a maximum speed of 115km per hour, almost a speed attained by a non electric car. After testing the car on acceleration, endurance and maneuverability it will compete in the 22km race at the Silverstone F1 circuit. A stiff competition with other electric cars is in line, but the main competition will be with ethanol and petrol powered cars.

The car is yet to be named and its estimated cost stands at about $31,000. There was no need to buy new tires since tires imported in 2009 are being used, which will moderately lower the cost. As told by Nikhil Tiwale, the team’s media coordinator, a few things are yet to be fixed by the team, but the car will be unveiled by the end of the month. In May, a month before it is shipped to UK, the car will undergo an extensive testing at the Indore track, and if lucky enough, Formula racing celebrities will be invited for the unveiling ceremony.