If you are an eco-conscious person, there’s nothing better than working out and generating energy at the same time. In fact, human powered electricity generators might be the most sustainable in their league. Nevertheless, you can’t escape the fact that they do require hard work, but when you are certain that you going to be work hard, you might as well take some electricity out of it.

Researchers around the globe are experimenting to find new ways of generating power by utilizing renewable sources like solar, wind, ocean, and kinetic energy. Here’s a list of some human-powered electricity generators that would help us generate energy from now until doomsday. We just hope that they go mainstream in the future. 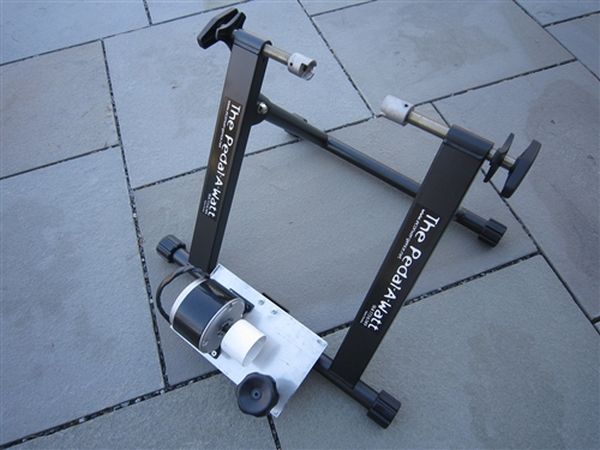 This power generator comes as a stationary stand to which you can attach your bicycle. The stand houses a generator that utilizes the power of movement of the back wheel of your bicycle. The energy that you create while cycling will be available for direct use. Later, it can be saved in a battery in the power pack for later.

Pedaling for two hours should be enough to generate 400-watts of electricity. This can power a 200-watt television of two hours. Depending on the rider’s physical strength an average rider will be able to produce 200 to 320 watts of power. 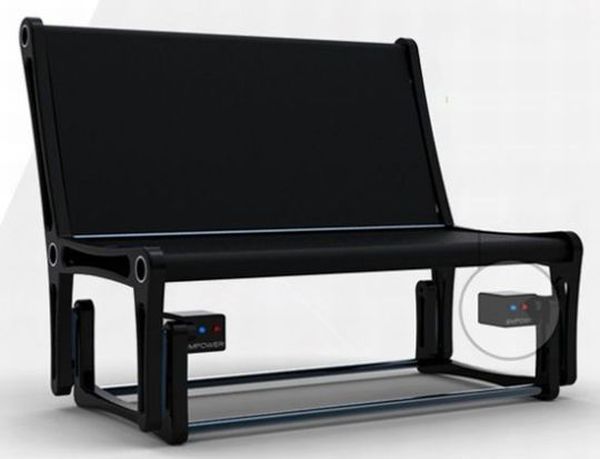 This energy-generating rocking chair harnesses the kinetic energy of each swing. It makes it available for use via USB connection. Ryan Klinger, the designer of this innovative electricity-generating chair has made this product completely out of recyclable material.

The hinges connect to a kinetic energy-based electricity generator and a lithium-ion battery to store the created energy. The chair has low-energy LED lights. These tell you how much power you have created and stored in your Empower rocking chair. 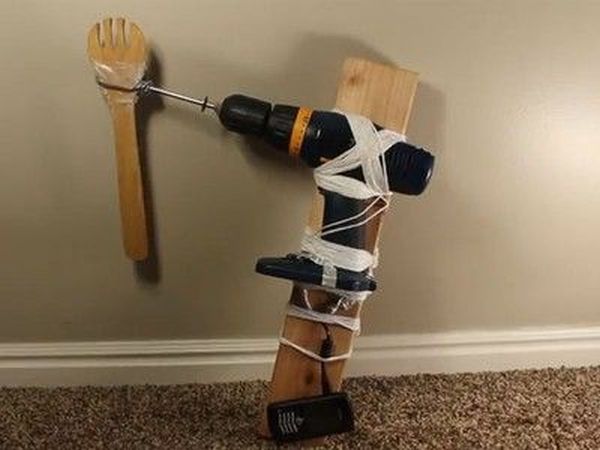 The King of Random created this handy human powered cell phone charger by using just a few household products. The basic structure of this charger is a cordless electric drill. When you run this in reverse and crank by hand, you can use it to generate energy. It stores the power that it generates in the battery and it can then use it to charge a device. The only materials used to create this emergency charger were a USB charging cable, electric drill, yarn, a salad fork, a scrap of 2×4”, aluminum foil and scotch tape. 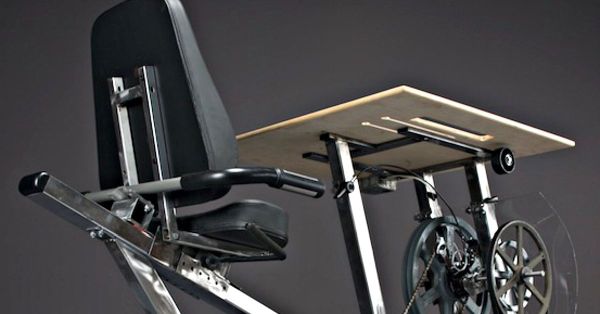 Andy Wekin and Steve Blood from Essex, New York have created a bike machine. It can power everything you place on its desk. Furthermore, the designers believe that with the efficiency of 97% bicycle technology is a perfect way to reinvent electricity generation. The concept is an open-source program for now and the completely detailed design will be available for manufacturers to use. The Bicycle Desk will generate power from the kinetic energy generated by your cycling. In addition, it will use this electricity to charge your laptop and your cell phone from the ports on its desk. 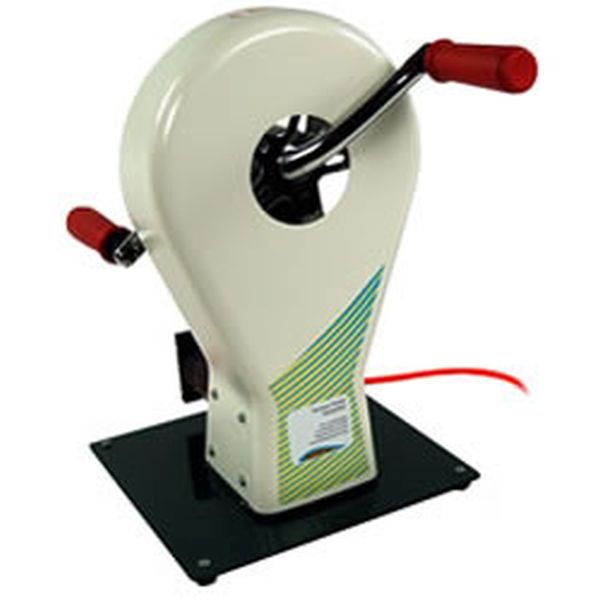 This popular hand crank/foot crank Human Power Generator has found application in various research centers at Antarctica and a number of schools in North America, Europe, and the UK.  It can charge between 3A to 5A of current to store in a 12V battery. The standard version of this generator comes with pedals but hand cranks can be purchased as an extra accessory.

The generator has a screen that displays the electricity generated, the endurance levels of the person pedaling and the battery storage status. This generator can be used to power smaller appliances and water pumps. 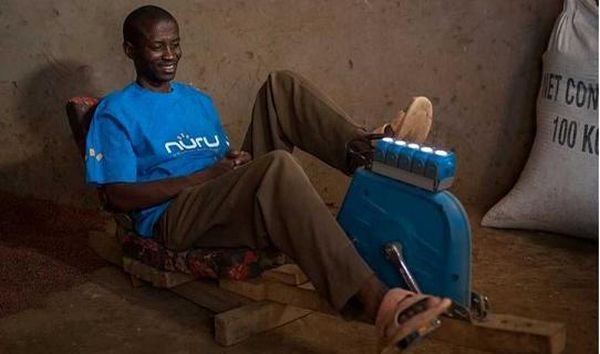 This human-powered electricity generating cycle is being used by many poor households in Africa. This commercially available electricity generator can power up to five modular LEDs as well as mobile phones and radios with just 20 minutes of cycling. This generator is a great way to power numerous rural houses in Africa without the harmful effects of burning fossil fuels.

Nuru Energy’s innovative pedal propelled generator is a huge help for fishers, farmers and other rustic workers in underdeveloped and developing countries. The machine, which is knee high, contains a couple of bicycle like pedals, a power generator, and a storage facility. The users can pedal the cycle for a few minutes to produce power to light up LED mounted lamps for long hours.

Nuru Energy mainly sells its pedal-powered generators among fishers and farmers in various countries in Africa and other markets like India. The company often distributes the product for free to customers on the condition of payback in installments. What is amazing with the self-powered generator is that it can produce electricity for various lanterns with a reduced cost compared to buying batteries for them. 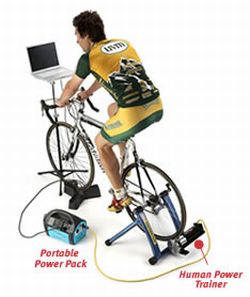 Wind-stream offers two types of human power generators. Both are based on transforming movement of the human body into electricity. The Human Power Trainer and the Human Power Generator are the solution to energy education in the classroom, failsafe backup power, and productive exercise. The human body can be highly efficient at delivering energy. Most adults can generate a steady 75 to 150 watts with spurts of double that power. The Human Power Trainer bike generator provides a sturdy, adjustable stand that raises and clamps the rear axle of your bike, with an adjustable friction wheel, a flywheel for steady power, and a DC generator that can deliver over 500 watts.

The stand has large and heavy rubber feet for stability and quiet. The generator will deliver 12V or 24V power depending on the battery it’s connected to (use higher gears with higher voltage). Charge your off-grid or RV household battery, or any portable battery pack. Stay fit and side by side save the Earth for the generations to come.

Scientists around the globe are looking for alternative methods of creating electricity that is more sustainable than burning a large hole in the non-renewable chest. Human-powered machines are the face of a new technology that draws the kinetic energy from human movements to generate electricity and power appliances. In fact, human-powered devices are the products of these innovative experiments for creating a more sustainable mode of electricity generation.

The twingoals of staying fit while being eco-friendly and creating usable electricity are both there in human-powered electricity-generating devices. Furthermore, this is not about the machines feeding off human power like in the Matrix, no really, trust me, meat bag.