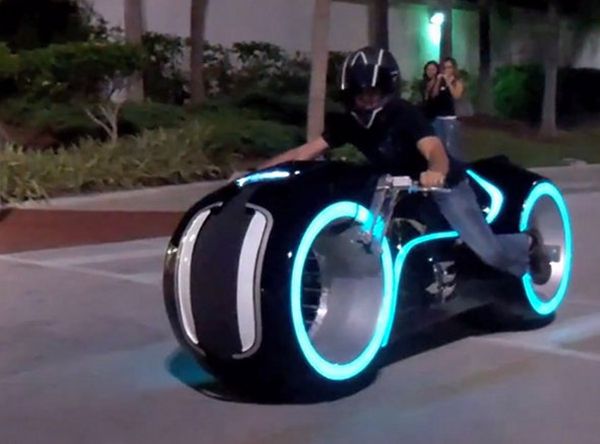 The pollution produced by transport vehicles is the main cause of fall in the fossil fuel level and rise in the greenhouse gas emissions. Various eco friendly sci-fi concepts are being created by the researches to make vehicles efficient and environmentally friendly. Parker Brothers Chopper has created a fully electronic sci-fi bike concept inspired by conveyance from 2010 TRON legacy. The design has been named as All Electric E-TRON Lightcycle.

The earlier version of Lightcycle project that was launched last year was gas-powered but this time company has created an incredible fully electronic bike concept. The electric motors will work very quietly and still make people turn around and watch you ride the bike. It is an eco friendly bike which promises to run without producing any carbon emissions.

The performance of the bike is equally impressive as its looks are. This flamboyant single seat bike is run by a 96 volt electric motor and has lithium ion batteries. An extraordinary speed of 100 mph can be achieved by electric motors which is pretty impressive. A single charge can power this bike for 100 miles and the battery can be recharged only is 35 minutes.

Once in the market, the bike will be the only one of its kind. Perfect speed and impressive power with emission free engine is the rare combination. Charging time taken by the batteries is very less and they become ready to power the bike just in 35 minutes. Blue light strips all over the bikes make it look gaudy and flashy especially at nights. This bike offers a remarkable combination of smooth ride at high speed which is not offered by any other bike available in the market.

The prices are still to be decided and the monstrous bike is expected to range high. It will be the best bike to rule the streets and show off but unavailability of rear seat makes it suitable only for single person and not for family persons. The Lightcycle is run by short lived lithium ion batteries which provide high internal resistance as compared to other batteries.

Word around the web:

You might not find yourself lane-splitting or scraping the pegs while astride this beast, but – at least until landspeeders hit the market – you’ll be hard pressed to find a more radical 21st century ride.

With the TRON-fever far from being over, many companies turned their attention to the development of related merchandise, but only one was brave enough to actually build replicas of the LightCycle bikes featured in Disney’s RD movie.

Amazingly, the bike is street-legal. It is also frikkin’ awesome. If I ever downgraded from pushbikes to motorbikes, this would be the one I’d get.

As for practicality, we’re not experts on motorcycles, but it does seem a bit hard to ride. We guess it’s a small price to pay for the looks you’ll be getting when riding this beauty — especially at night, when the bike lights up just like the one in the movie.