“Shobuj Pata” stands for ‘Green Leaf’ in Bengali, the official language of Bangladesh. Shobuj Pata is a habitation project that has been planned for completion by 2015 by one of the largest developers in the country, Rupayan Housing Estate Ltd. It aims at providing its residents the best of modern living combined with green concepts through a sustainable community living. The site plan has provisions for green spaces, courtyards, commercial areas, parks and parking along with a conventional center, school, mosque and a city square housing a market. The idea is to allow the inhabitants to derive the simultaneous experience of a city and nature. With about 2300-2400 dwellings slated to be constructed, the project will easily house about 10,000 occupants. 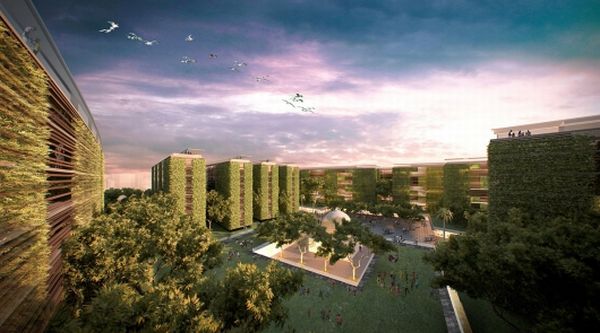 The trio of JET Architecture, JCI Architects and Terraplan Landscape Architects has taken up the challenge of designing the Green Leaf project using innovative technology to make it economic and feasible. The foremost challenge comes from the hot and humid climate conditions that exist in Bangladesh. Dhaka naturally faces the heat-island effect and has a high-density atmosphere. It has the highest annual rainfall among all the countries of the world. These conditions have been turned into advantages by intelligent design.

The building envelope has been designed with vegetation and vernacular textures. An open-air architecture has been adopted wherein the interior and exterior spaces become interchangeable. Local vegetation has been used as the design element on the facade, thus bringing Bengali landscaping into the complex. Bioswales have been incorporated along the edges of the streets to prevent overflow of water. They also double as a rainwater filtration system which then provides irrigation water for the gardens and parks. Planning for heavy rains, the rooftops of the buildings have been planted to mitigate water runoff and help water retention.

The green-planning that has gone into the design also aid in mitigating the heat-island effect. This helps in reducing the overall energy consumption for cooling. The green belt also acts as a natural air-filtration and purifying system. The housing units have been aligned to receive maximum ventilation and sunlight on either sides. The vegetation has been used as natural boundaries and demarcations for the various spaces. Thus, one gets a feeling of living among the trees with all the modern amenities. The trees used are all of the fast growing variety and thus the greenery is created in quick time. This greenery has been shaped to grow into the buildings of the Green Leaf plan.

The parking spaces are all underground which reduces the traffic and clutter on the streets. The public areas of interest are all centrally located and have been provided with ample space. Along the periphery and sides are private gardens and courtyards. These too have been integrated with the building architecture to provide maximum effect and maximum aesthetics. This kind of a community project in Bangladesh stands as an example for sustainable growth and development which incorporates beauty along with function.