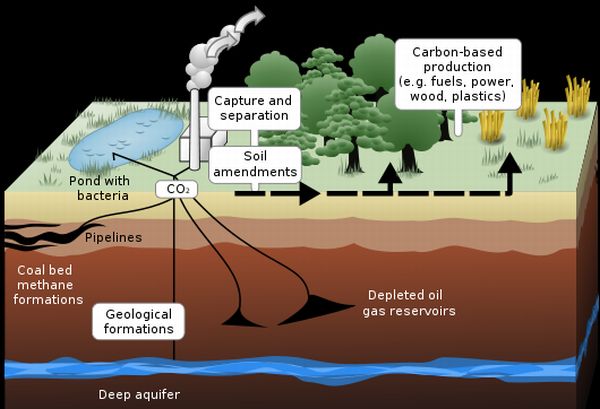 Carbon dioxide is the major reason for global warming and the level of carbon dioxide on earth is increasing day by day. Experts agree that in order to save the environment it is very important to restrict carbon dioxide entering the atmosphere. One way is to capture carbon dioxide and store it deep underground from where it could not affect the atmosphere. This process is termed as Carbon Dioxide Capture and Geological Storage (CCS). The impact of this process has been discussed below.

The scientists of Berkley National Laboratory are working on a project that aims to produce energy from earth’s heat using CO2. They are planning to store CO2 three kilometers below the earth surface in a sedimentary layer at 125 degree Celsius. Under such extreme conditions CO2 enters super critical state of having liquid and gas properties. It will be then drawn to the earth surface and supplied to the turbines converting heat to electricity. From here, the CO2 will again be supplied back to underground storage over and again repeating the same cycle. The process will eliminate large amount of CO2 traces as some of it will be permanently absorbed by sediment and some part by the system running turbines.

Various large scale geological projects working on storing CO2 underground are already in operation and a large number of the new projects have been proposed. These projects can help significantly to reduce global warming problem. The same technology is being used by gas and oil companies since years and this could be used in CCS to reduce carbon emission for the coming crucial years.

There are two faces of every coin. The CCS process though looks very beneficial is equally complicated. The gas injected underground every year should approximately equate fluid produced by oil and gas companies. For this, large number of injection sites will be required all over the world. This process of injecting CO2 changes fluidic pressure beneath the earth and creates pressure on high tectonic plates. Activation in underground faults due to extreme pressure causes disturbance in equilibrium. Occasional upheavals along the plate peripheries can lead to earthquakes. Moreover, another aspect that has come into light is that seismicity could create narrow trails through rocks from where stored carbon dioxide could progressively leak back into the atmosphere and if it seeps back then the effort and money invested to keep it separated from atmosphere go futile.

The researchers have successfully traced out various sites where rock is comparatively weaker and it would be better to use these sites as then rocks will accept large amount of gas without creating seismicity.

As discussed above, the CO2 stored underground can leak due to seismicity. The adverse affect would be that it can pollute drinking water and make it undrinkable. The effect of carbon dioxide makes water acidic in nature and unfit for drinking. It also creates problem while coal mining. It has been found that another side effect of carbon sequestration is that its presence in coal mines releases some toxic metals which could contaminate water. A proper depth must be chosen for CO2 sequestration to save changes in water chemistry and toxic release of elements. We need to have every tool to implement the process so that its implementation does not pose any threat to human life and safety.

Till now only two such projects, one in Norway and other in Algeria, are in operation and fortunately they appear to work as expected. But according to the estimates, around 3,400 such projects will be needed in future to deal with carbon dioxide. Therefore, choosing ideal sites will not only become difficult but impossible. The challenge will be to deal with technical as well as geological issues so that the efforts to reduce greenhouse impact do not threat human existence by imposing risks of earthquakes and water contamination.

The method of carbon sequestration is being discussed by the researchers and scientists across the world. The process is beneficial in reducing greenhouse gases by pumping carbon dioxide into joints that are not helpful for coal mining. An estimate has been made that storage capacity of around 3 trillion tones of carbon dioxide is present worldwide. Researchers need to explore these sites and make them operational as soon as possible to save Mother Nature from global warming. The debate and studies on the above topic are still in progress.