Cruising through the neighborhood or down random alleys on a skateboard will now become far more interesting than it was. All you have to do is think, and you will find yourself sliding along without the need to move. Chaotic Moon Labs had earlier dazzled you with their Kinect controlled or motion controlled ‘Board of Awesomeness’, and now they are out with an upgraded version of the same, called ‘Board of Imagination’ 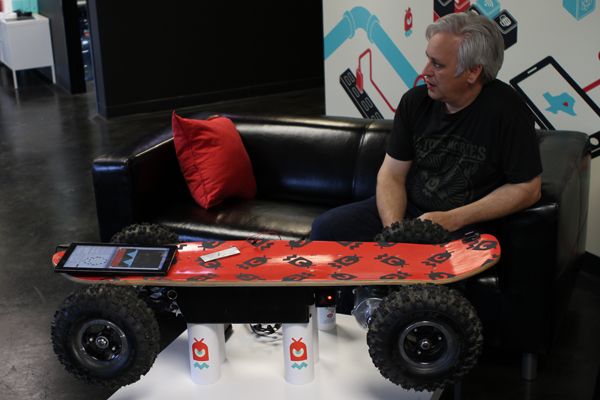 Unlike the antecedent version, which was monitored by gesturing at the Kinect sensor over the front; this one works by monitoring your thoughts through an Emotiv EPOC headset. The headset is worn for tracking the brainwaves, which are then transmitted to a Windows 8 tablet on the top. The headset is synchronized with the board, and all the wearer is required to do is think about where he wants to go, and the board will attune itself with the thoughts and glide along. The speed and the breaking will be controlled by telekinesis, which means that your body will move solely through thoughts and by the application of a physical force.

Other components of the ‘Board of Imagination’ have been retained from the original prototype. This would include a phidget interface module along with an 800 watt electric motor placed under the skateboard. This motor is connected with the Windows 8 tablet, which ultimately helps to monitor and control the speed, etc. It has been integrated with a set of all terrain tires and hence gives you the pleasure of off roading as well. Surprisingly this board can tread up to a top speed of 32mph, therefore, delivering all the thrill you want.