China is a country not really known for its abundant traffic force. Though road snarls are witnessed in plenty; some that go on for ays at a time, visitors are usually puzzled over the lack of traffic cops to monitor the flow of vehicles and flouting of rules. But there’s a new system in place designed to ensure that rule breakers are kept in check. It’s unlike anything you have ever experienced or seen. Plastic signs have supposedly been kept in and around city roads warning drivers to slow down or obey traffic rules. What’s new about that? Well, the signs incorporate LED displays that project such messages. They’ve also been equipped with simulated red and blue cop car lights. 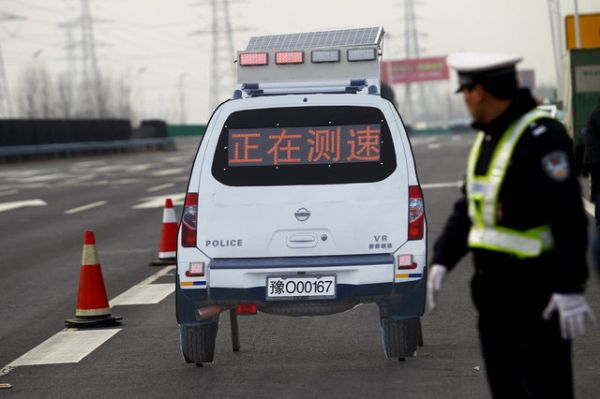 What’s amazing is that this innovative idea has actually had an impact on rash driving and rule breakers. We don’t really know the brains behind this clever concept except that the signs have been posted along the Beijing-Hong Kong-Macau highway near Henan, the capital of Zhengzhou.

Most cities witness high traffic during rush hours. This is also the time when road accidents peak as pedestrians and drivers alike battle to commute. 10 of the signs spotted along the Beijing-Hong Kong-Macau highway were placed around problem areas like construction sites and highway intersections. It is reported that the signs have a greater effectiveness during the evenings and at night when the LED lights come aglow.

There’s another feather that makes them intriguing; all the signs are solar powered. That’s right, not only do they serve to curb bad driving habits, but they do so with the help of the sun. We only wish that such incentives would be taken by other cities that can’t afford to dedicate too much manpower for monitoring traffic.