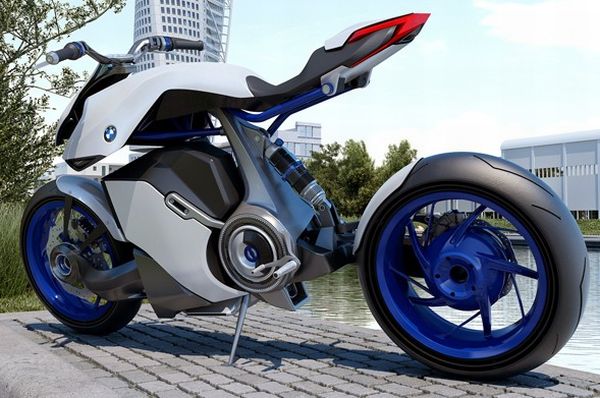 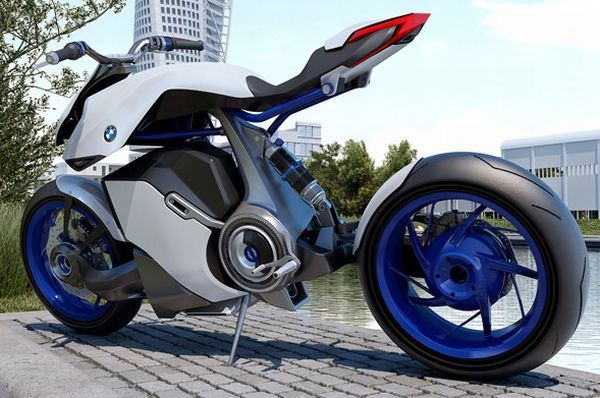 A zero-emission vehicle has been defined as one that does not release any tail-pipe emissions from source of power on board. The pollution of air takes place on a large scale due to the release of poisonous chemicals, particulates and gases from vehicular exhaust. Though the amount seems little, the sum total of all the exhaust, all over the world is a tremendously large amount! To counter this, many vehicles that run on electricity have been made. These too cannot be called zero emission vehicles in the strict sense because the source of their electricity may not be clean. Here , we present five motorcycles which are completely clean.

The new BMW HP Knust is a futuristic looking bike and the bike of the future too. Zero-energy biking becomes serious when a giant like BMW takes it up at a level that almost borders on commercialization. A group of dedicated students of designing at ISD of Valenciennes worked along with members of team BMW to come up with this beauty of a bike. The concept is powered by hydrogen to ensure a zero emission ride.

The concerns with a hydrogen fuel-cell lie with the safety aspect. Hydrogen is an explosive gas. To make the bike safe, a special cryogenic tank has been designed and it holds about 20 liters of the gas. The controls and brakes are completely electronic and the bike rests on electromagnetic suspensions that provide a smooth and comfortable ride. The frame has been made of aluminum and the tubular parts are constructed from carbon and steel. 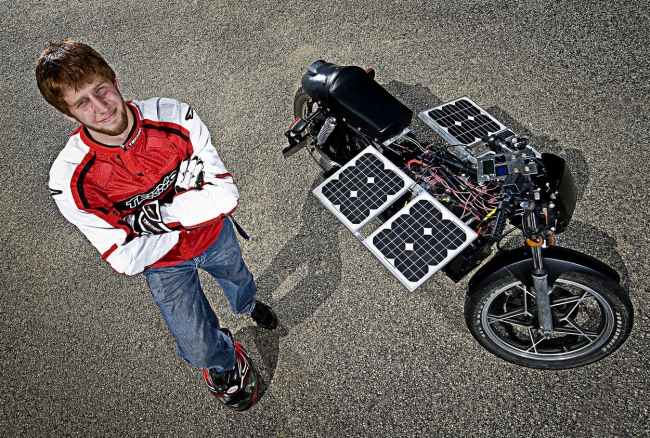 This is a world where individuals bring changes and transformations. When Tony Danger Coiro, a student at Purdue University, bought an old Suzuki bike for $50, nobody thought much. But today, $2500 and several years of hard work later, the same bike is a masterclass when it comes to green biking. ‘Run on the sun’ seems to be the designers motto as he retro-fitted the bike and made modifications. It now runs silently, reaching speeds up to 45 mph for a range of 24 miles.

The experience is simply surreal – a cheap, silent and green way to travel fast knowing that your carbon footprint is zero! Having received a provisional patent for his work, he has launched into a bigger project now. He is now obsessed with the figure 100. He wants to design a 100 hp bike that runs for a range of 100 miles at a speed of 100 mph – completely on solar energy! This will be something that the world will look out for! 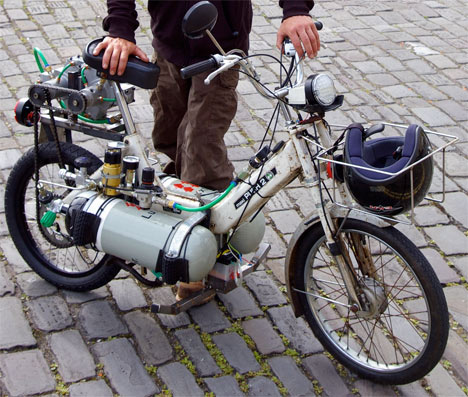 Jem Stansfield has made good use of his degree in aeronautics, his experience as a special effects technician and two cylinders of compressed air that firemen use as part of their breathing apparatus. He has combined them all to produce what could possibly be the world’s first air-powered bike! With a top speed of 18 mph and a range of 7 miles, the bike will definitely be great for short commutes. Adding a pedal and making it a hybrid can further enhance its uses!

One may argue that the electricity used for filling the cylinders with compressed air is not all that clean. Well, the utilities that use coal keep the coal burning irrespective of the usage. Filling up the air in off-peak times when the coal is still burning will definitely assuage the conscience of the most sensitive critic! Again, this is another product that should be fine-tuned, perfected and commercialized. 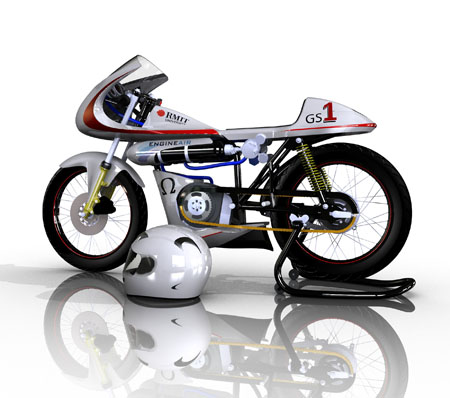 An ultra-light weight, aerodynamically designed bike by Edwin Yi Yuan runs on compressed air, a concept that we just discussed, with a difference. It has two compressed-air tanks to provide the thrust. But the best part is that there is zero pollution involved even in the refilling of the air tanks. The bike hosts solar panels that provide energy to amass the air into the tanks! Thus, this is an absolutely green bike.

A rotary air engine has been utilized, which is compact and powerful, revving up to 3000 rpm. It is a single geared bike and the sprocket has been directly bolted to engine’s axis which is in turn bolted to the rear wheel. The air tanks are made of strong and light carbon fiber. The idea of including solar panels ensures that on a good sunny day, the bike will have an infinite range! Cameras that record the sun have replaced the lights on the bike.

An old and salvaged Buell cyclone bike has been refitted and retro-fitted by two Swarthmore college students to run on the energy provided by hydrogen fuel cells. A Ballard fuel cell which is actually a Polymer Exchange Membrane (PEM) stack, has been fitted and it generates power of about 1.2 kw (1.6HP) using an electric motor built by CFR from Italy.

Overcoming the dangers of storing hydrogen gas, the bike has cylinders that hold metal hydrides. A chemical reaction that required heat releases the hydrogen gas from thee hydrides. Thus, in this manner, about 200 liters of hydrogen can be stored in the tanks in the hydride form. The expected efficiency from the bike is estimated to be about 46 percent which is quite good.