Over the last decade, the number of electronic gadgets in use across the globe has risen dramatically. With the growth of the personal electronics segment, the demand for electricity is growing at an unprecedented rate. However, we cannot upgrade the current infrastructure that distributes electricity. At least not enough to meet the current demand. It is already working as efficiently as it can. Therefore, we should find alternative methods of electricity generation. Innovative technologies like a solar grid with their sustainable design might help us with this. 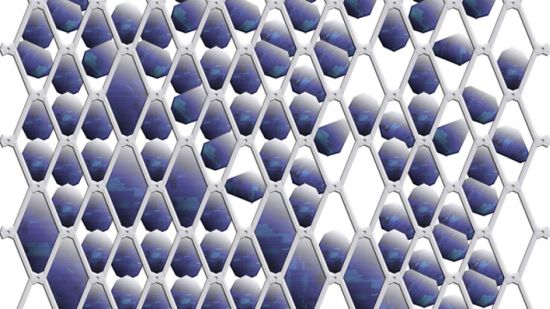 Designer Johanna Schönberger’s ‘Solar Grid’ combines the flexible thin-film technology and basalt fibers. It does it by making a a meticulous piece of structure that aims at providing double functionality at a time. The structure not only harness energy from sunlight but also provides an excellent opportunity of learning by working as a free organic model of education. Basalt fiber makes the design cheaper, but ensures durability that of similar to carbon fibers. This is because of the fact that these fibers have better physicomechanical properties than fiberglass. 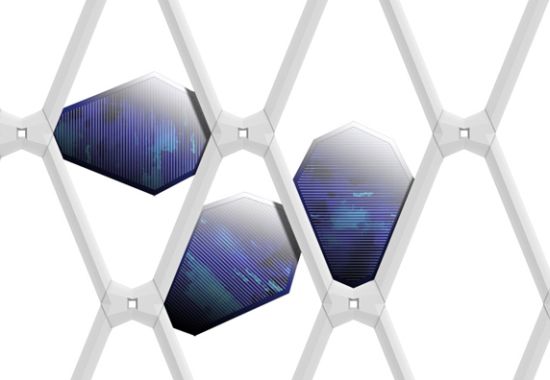 The design is customizable due to arbitrary arrangement of leave shaped PV cells. This helps it adjusting to any particular environment. This adds more advantages to its ornamental aspect. Although the structure is a sort of network of basalt fibers, each PV cell work as a single unit that generates electricity independently. This energy can be utilized depending upon the individual requirement. In brief, the design is an excellent piece of work. It combines ornamental, educational and energy generating features in one structure. 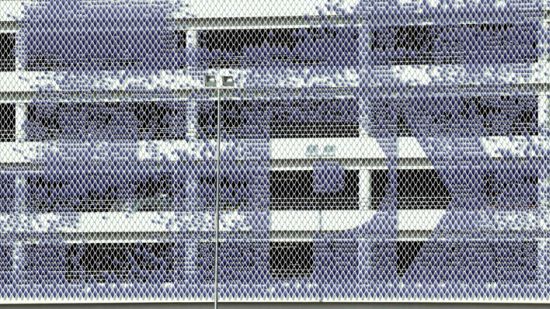 Since around a third of the electricity produced is lost in transmission. We can even reduce this additional dependence on fossil fuels. All we need to do is find more sustainable methods of electricity production. Making solar energy more mainstream is one of the ways of doing this. Here are some solar powered energy chargers that help with this: 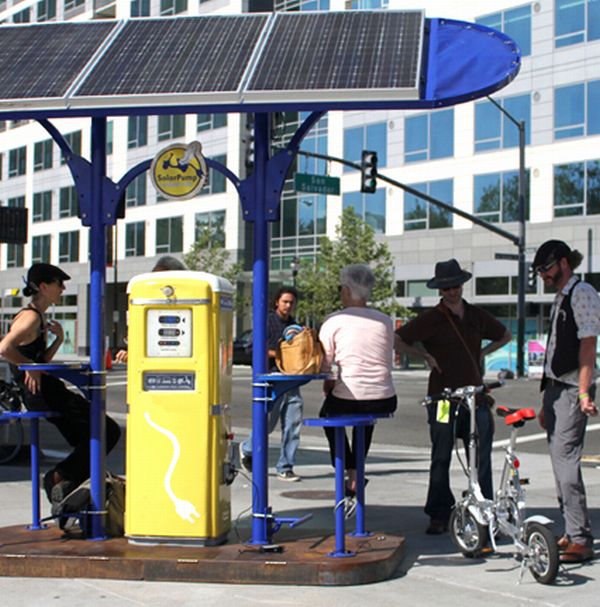 The Solar Pump is an innovative concept designed for public spaces by Sol Design Lab. A petrol station allows users to refill their cars when they are running short of fuel. Similarly, the Solar Pump can serve as a place where people can quickly charge their cellphones, iPads, laptops and other portable electronic gizmos while hanging out in a public spot like a beach. With PV panels installed at the top of the canopy, the pump is able to generate enough electricity to charge a handful of gadgets. 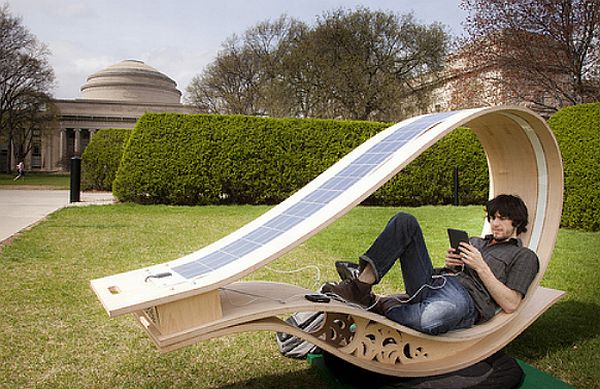 A professor of architecture at MIT Sheila Kennedy has been investigating the use of solar panels in everyday objects.The MIT SOFT Rockers concept is the culmination of her research work in the field. The basic principle behind the public space seating concept is to make solar panel fitted installations look as aesthetic as possible. A 35 watt solar tracking system along with an interactive 1.5 axis allows the 12 amp battery to harvest and store electricity when the sun is up. This allows users to charge their gadgets just by plugging their USB chargers into the electrical outlets in the rocker. 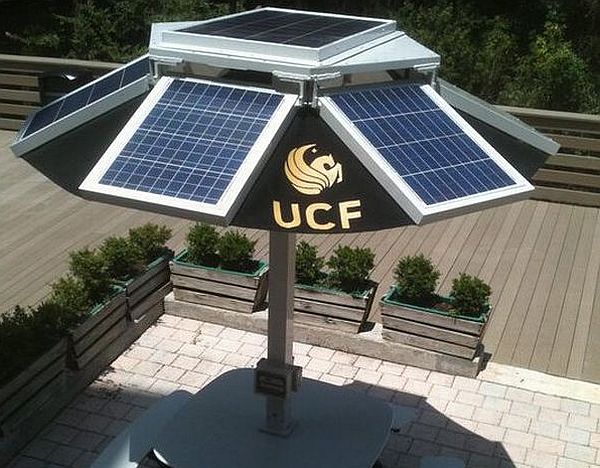 This is one of the more practical solutions for people looking to go off the grid. The Solar Dok is basically a high tech sunshade with PV panels installed on top. The Dok comes with 110 VAC GFCI power outlets that allow users to power and recharge virtually all of their portable electrical gadgets via a USB Type A port. The Dok offers users a reading of power levels via a charge controller and a digital readout. A low powered, high intensity 700 lumen LED lighting system too has been installed to keep it illuminated at night. 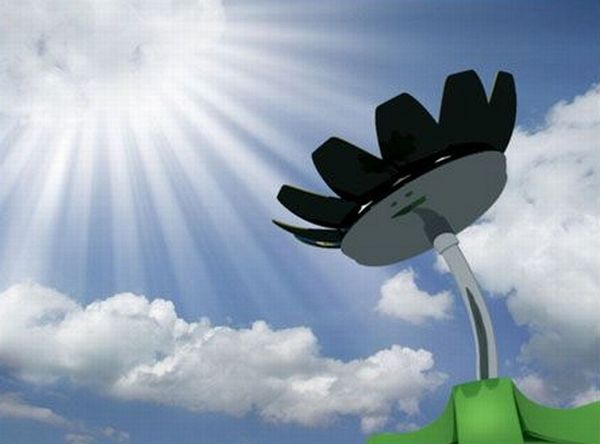 The brainchild of designer Brian Borja, the Flower Power Battery Charger draws on the form of a sunflower. It ensures that the photovoltaic panels hidden away in its petals receive a maximum amount of sunlight during the daytime. The PV panels feed a battery hidden away in the bud, which can be removed when required. When the sun sets, the petals of the Flower Power Battery Charger automatically close until next sunrise to protect the PV panels. 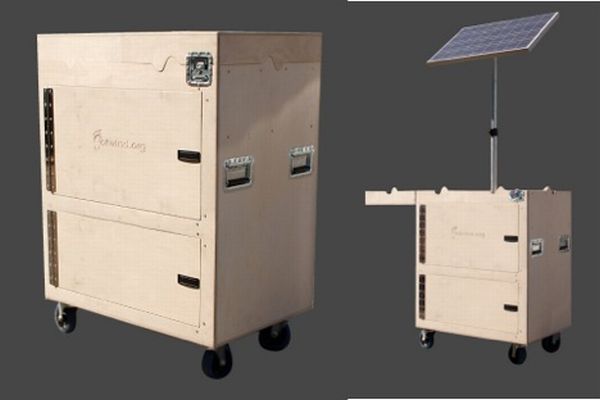 Gotwind’s Street Charger is a wonderful new initiative. It seeks to provide solar power for charging of cellphones and other gadgets in remote areas of third world countries. Similar to a cart, the installation allows up to 20 cellphones to charge simultaneously. Moreover, it can supply power for up to 20 hours per charge. Since it takes over 44 hours of sunlight to charge the Street Charger’s battery fully, the cart also comes with two 110 A/h internal batteries that serve as backup power. Using a 60-watt solar panel, this version of the charger operates at 12 volts though they are hoping to improve its efficiency further. 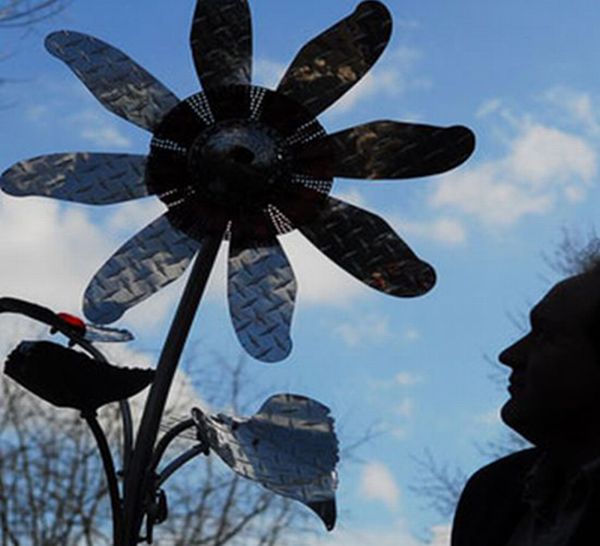 This 14 foot tall aluminum sunflower sculpture is actually a handy solar power generator created by artist David Edwards. Using a petal powered wind turbine in combination with power harnessed by the solar panels that are embedded within the leaves, the Power Flowers installation stores electricity in batteries, which can be later used to charge phones and other gadgets. It also powers the LED lighting that illuminates the sculpture at night. 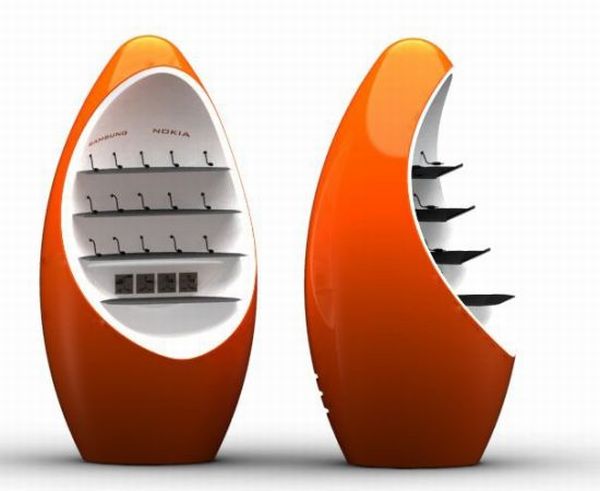 Made using acrylic sheets, metal clamps, steel pipes and sheet metal, the Solar Mobile Charging Kiosks concept by industrial designer Vino Jose, seeks to allow people to charge their cellphones via solar energy while they are out in public. The kiosk has a few dedicated shelves where users can place their cellphones while they charge, which allows many people to use the chargers at the same time. 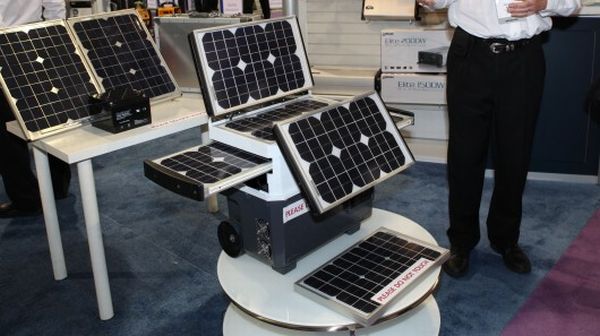 Wagan Tech’s portable solar powered generator is a unique and handy device that is intended for outdoor use by campers and off roaders. The fully assembled unit comes with five solar panels that feed a 12 volt battery. Once fully charged, the battery provides 1,500 watts of power for around eight hours. 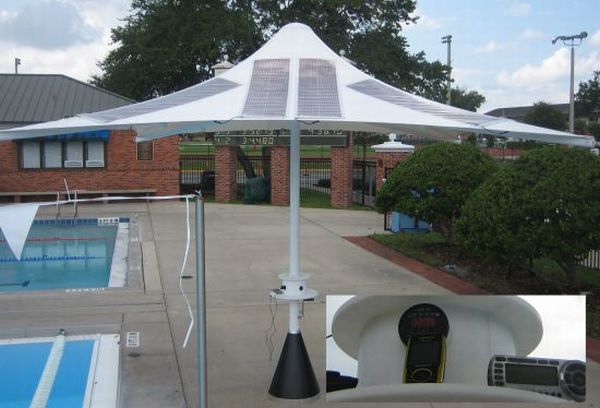 Created by SKYShades using the Power Plastic thin film from Konarka Technologies, the Powerbrella, harnesses solar power, which powers your portable devices anywhere. The charger is intended to be used as a fixed or a retractable installation that can be connected to a battery to provide a power supply for laptops, tablets, and even cellphones. 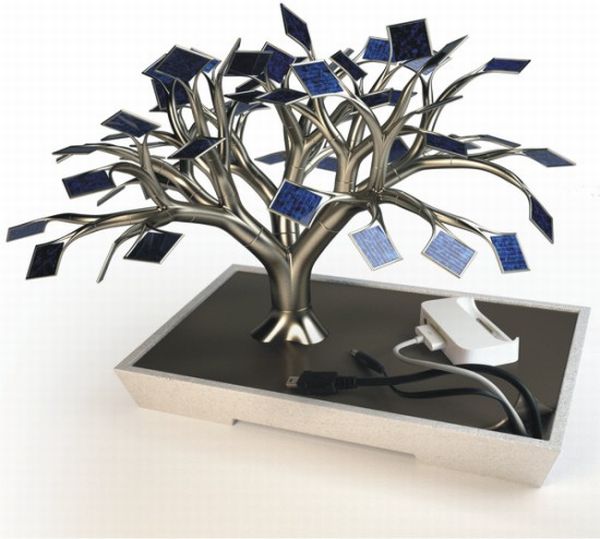 The ‘solar tree’ designed by Vivien Muller comes with 54 tiny yet powerful PV panels that can collect solar energy and store them in a battery. The design is intended mostly to promote the use of solar energy within households. Since the Solar Tree is relatively small, it can easily be moved around and placed in the sun as and when needed and users don’t need to spend extra cash on having it installed permanently within their living premises. Being portable, the generator can also be taken along by users when they are leaving their homes for a trip.