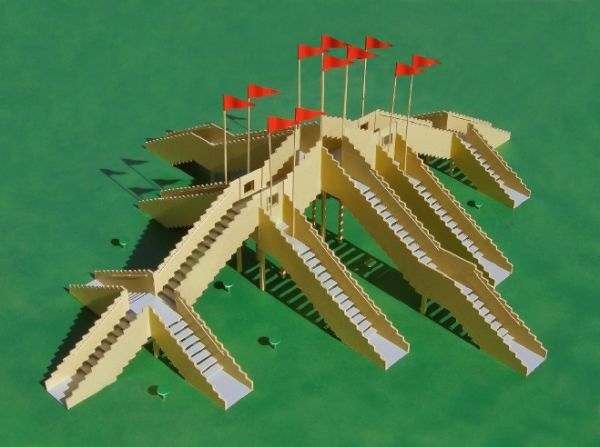 At the first instance, the above pictured structural concept may look like a framework of an unfinished Ziggurat of biblical proportions. But in reality, it will be an architectural showpiece with a tinge of novelty. Landmarks and art structures generally depend upon the visual impact of their intrinsic aesthetics.

But it’s a time for a change, designer Michael Jantzen has envisaged an art structure that adamantly fuses the facet of practicality with a well thought out elevation and plan. Christened as the eco-stair Scapes, this building will comprise a multitude of staircases (as the name suggests) juxtaposed along each other to create an intriguing spatial volume with variations in vertical nature.

The concept of stairways has been used since the dawn of human civilization. As a matter of fact, it is considered as one of the oldest building components envisaged by man (according to historians – it was thought of at least before 8000 years), in relation to the (manual) modification of his surrounding. Designed to cover vertical distances in the easiest possible way, this structural component has now become a cornerstone for almost every kind of habitable building.

In relation to this, Michael Jantzen has contrived this special structural system as a ‘tribute’ to our very own vertical bridges. The building would predominantly utilize the visual sense as well as functionality of staircases. According to him, the building will serve as a public functional art component that will not only entice people by its visual impact, but also encourage them to use it in a spatial perspective. The sense of climbing is always associated with physical workout; and in that respect, what can be better than a free, public facility that offers that.

Structurally, the whole set up would be modular in its scope, thus facilitating the assembling (and disassembling) part of the system. So, it can be transported and constructed (on a short notice) in any public park with an available expansive area. Alluding to green technology, the modular elements can made from environment friendly materials such as naturalistic timber products.

But coming back to the practical user oriented feature, the adroit functionality of the structure is not just limited to provision of work-out options for the public. As a matter of fact, it also delves into meeting the criteria of energy efficiency by a fully sustainable solution. In relation to that, the designer has envisaged a clean power generation mechanism, which would in effect utilize the motion attribute of the visitors. In simpler terms, the structure will comprise of certain piezoelectric treads (the horizontal plane of a step), that will generate power due to the mechanical stress created by the work-out sessions of the users. Other renewable and clean energy systems like solar panel arrays and wind turbines can also be installed along the spatial distribution of eco-stair-scapes.

Finally, the structure will have an accessible seating area, with seats strategically placed for resting, after a hard session of working out. And as a personalized treatment, it is also possible to create specific smartphone apps that would measure the physical performance of each individual, on the basis of how much calories they have burnt or their optimized heart rate.