Every now and then we come across facts in the paper. These facts are mostly about how in the next few years the world would change for the worst. There would be a severe shortage of water, the temperature would skyrocket, and a lot of our land would submerge.  In addition, considering our every-proliferating lifestyle, we would have more demands than ever.  Therefore, to tackle all these we would need some extreme measures. Architecture would play an immensely important part in this. However, should we wait for the apocalypse to develop an architecture that can survive it? Obviously not, ULDU or Underground Desert Living Unit is one architectural concept that focuses on this very problem. 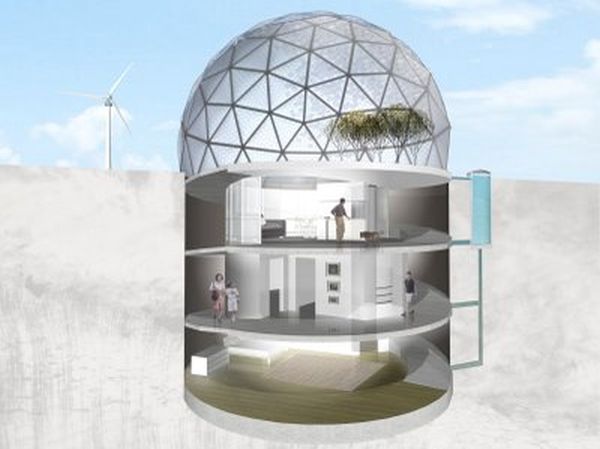 With the increase in greenhouse gases and the continuous emissions of harmful gases to suffice the planet’s need for energy and technology, global warming does seem inevitable. While the world is getting more conscious out the environment and the need to prevent such a disaster, futuristic designers have started thinking about the habitats of the possible millions of global warming refugees.

Reynard Loki and Jennifer Daniels are thinking about future living units. These could house all those people in deserts in self-sufficient underground homes. They call these units as Underground Desert Living Units or simply ULDU. In addition, iff global warming does strike at its full potential, people will have to shift their habitats. They would have to move to drier places such as deserts. Only at such isolated places, they can afford to live on the land or probably below it.

The ULDU dwellings take their power from solar and wind energy generators which will are there above the surface. A solar-powered greenhouse and an air purifier system will also be on the surface. It would provide the inhabitants with food and clean air.

The design of ULDU does seem an interesting proposal for a future, which no one would actually like to see. However, the designer doesn’t answer some really important questions. These are the questions like, where will the inhabitants get clean water to drink. Moreover, if the home would be in a desert, what will the designers use to construct the building? How will they grow food in such dry areas? ULDU doesn’t answer these questions.

Some More Unique Examples of Contemporary Eco Architecture like ULDU

1. Palmyra House in Mumbai takes sustainability to a new level 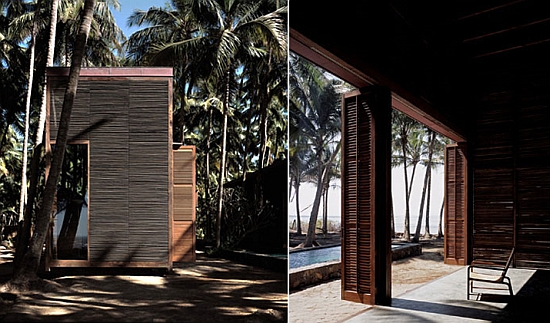 The Palmyra palm is one of the most important and the most common trees, especially in western India.  Indian architecture and design firm Studio Mumbai has found one more way of using the tree – craft a luxurious house out of it. 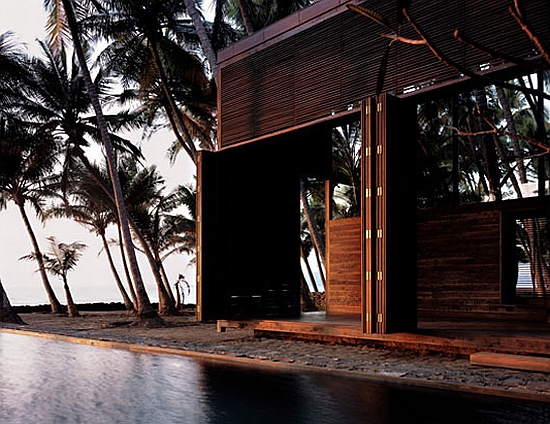 Architect Bijoy Jain of Studio Mumbai has designed a house built entirely from locally sourced and sustainably harvested Palmyra palm. The gorgeous house consists of two buildings sited on a working coconut plantation in Alibaug, Mumbai. A pool serves as a natural separation of the two buildings and an open court for adds to the natural appeal. You can open he façade of the house during warm summer months. Furthermore, the users can close it when they need privacy and warmth are needed. 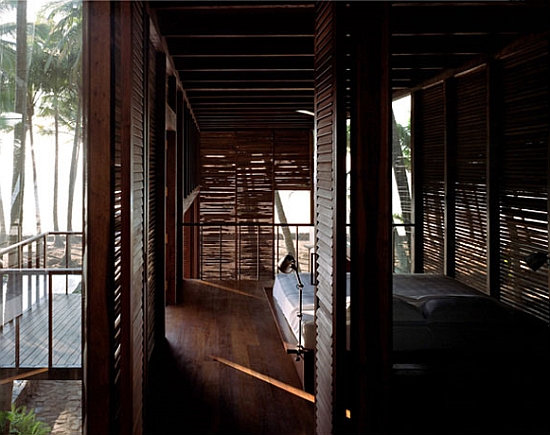 The house will always remain covered with the coconut trees. Therefore, the people living in the house will mostly be devoid of sunlight. 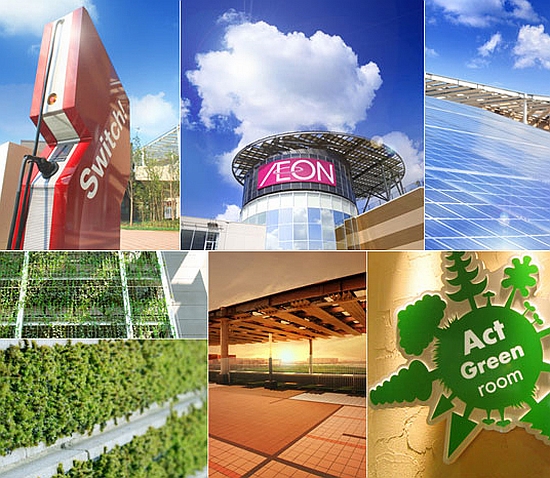 The Aeon Group has developed the largest ecofriendly shopping center in Japan, known as the Aeon Lake Town Shopping Center. The center is composed of two complexes – Mori, which will be managed by Aeon Retail Co. Ltd. and Kaze, which will be handled by Aeon Mall Co. Ltd. In addition, artificial lake separates the two complexes, which adds to the green environment, which technology and brilliant architecture has created.

Spanning over 220,000-square-feet, the complex utilizes solar panels and a hybrid gas eco system, which collectively result in an estimated 20% reduction in carbon emissions. Moreover, the shopping center also features Japan’s first consumer-ready charging station for electric vehicles. The designers hope that half an hour of shopping will be able to get your car enough juice to last up to 120 km.

With all that technology in place, the complex is only able to reduce its carbon emissions by just 20%. Futuristic designs do have to increase that number manyfold to sustain themselves in the world of tomorrow. 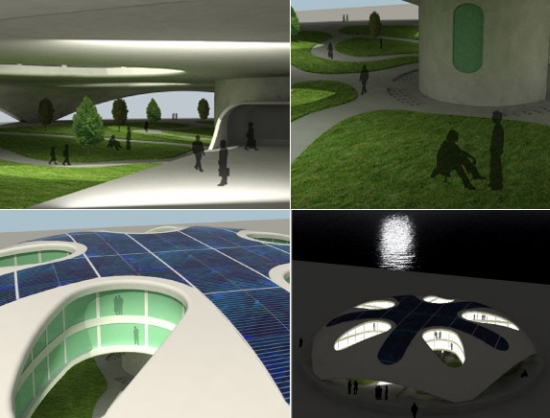 Eco-minded architect Juan Manuel Bustos has proposed the Greening Star mixed-use building that tries to solve all the three major issues – energy, potable water and pollution, which the world is currently facing. In addition, the building can be used as a green recreational space, which encourages people to live a sustainable life by following simple steps.

The Greening Star is equipped with a large photovoltaic array on its roof, which generates all the energy that the building needs. Moreover, the building comprises of a rainwater storage system that harvests all the water from the building’s roof and stores it in an underground tank for future use. 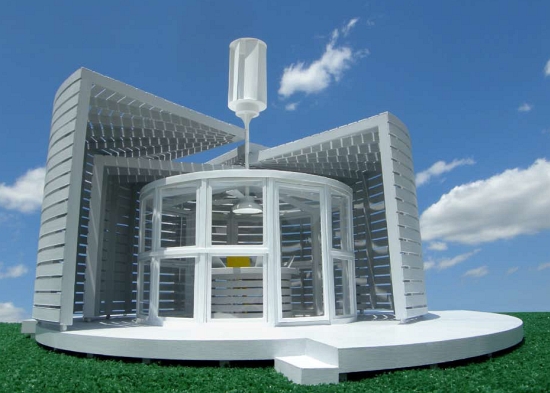 Michael Jantzen has always amazed us with some stunning creations that show a different and a green world. Carrying on his efforts to revolutionize urban architecture in a way that is least harmful to the environment, Michael has shared his newest creation, the Revolutionarium, with us. In addition, the Revolutionarium is a conceptual design study for a special kind of prefabricated, modular, interactive, functional art structure, designed to stimulate the creativity of its occupants.

The prefabricated structure will be constructed from sustainably grown wood products and other green materials. The structure is 26 feet in diameter and 14 feet high and has a 12ft diameter steel and glass cylindrical structure in the center. The structure consists of four wooden screens. Moreover, we can pull it around the cylinder, either to control the amount of sunlight entering the area or to control the degree of privacy people need on the inside.

What amazes us most, as always, is the use of a small vertical axis wind turbine to generate renewable electricity for the Revolutionarium. If the conditions where the structure is installed aren’t windy enough, solar panels can be added to supplement the wind turbine. Furthermore, the renewable energy generated by these systems is stored in an underground battery pack. Michael believes that Revolutionarium has many potential uses including a meditation space, yoga center, party house, greenhouse and an office/studio. 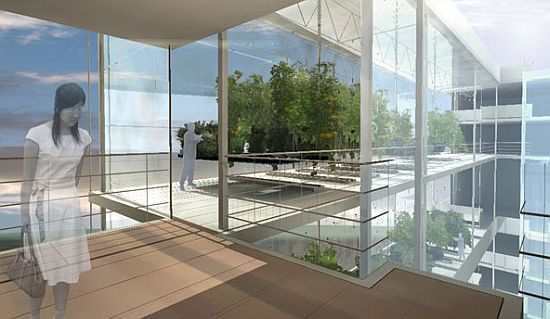 As a solution to China’s potential colossal urbanization chaos likely by 2010, Israel’s Knafo Klimor Architects will design green buildings in the country. The still-in-the-making 150-apartment multi-story building will have greenhouse inside the houses. Each apartment will have a space close to it, where families can grow organic and healthy food of their choice. The typology, in this way, incorporates the idea of subsistence farming in urban living, ensuring food independence and an additional income source.

Urbanization brings along with it significant unemployment, loss of traditional values, debauchery in social environment and depletion of natural resources. The typology of vertical green house in a building potentially meets these urbanization traits in a desirable way. It promotes an independent and green way of housing. 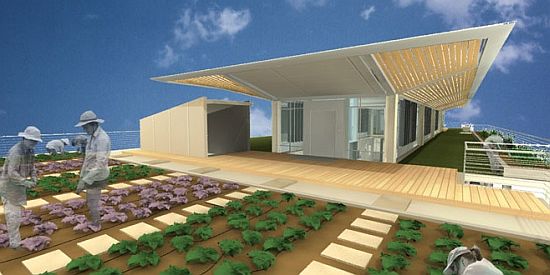 A UN report projects 50% of the Chinese population residing in its cities by 2010. Furthermore, the current Agro-housing project, which is set for completion by 2011, would just serve as a prototype with accommodation of mere 150 apartments. Hence, we do not see it making any significant difference in addressing the country’s alarming urbanization in the near future.