While oceans are suffering the most from our garbage disposal, it would be a pity if we aggravate their condition by putting to sail boats which harm them even further. Since water is denser than air if you pollute one portion of it that automatically harms all the other portions. No wonder scientists have even found polythene at the bottom of deepest recesses of the ocean. The situation isn’t alarming now, but it is set to become so in the near future. Using sustainable DIY boats is one way we can tackle this problem.

The pacific ocean has a new island that is growing in size with every passing day. Lying in the North Pacific Gyre, it is famous as the Pacific Vortex or the Great Garbage Patch.  It constitutes entirely of plastic and garbage. We must clean it asap.

If humanity moves along these lines, it is sure to be doomed along with the rest of the biosphere too. Spreading awareness about these facts and inspiring people to make better use of discarded plastic and other wastes, designers have come up with boat designs that are completely made of recycled materials. Here are five such boats that have set sail with a powerful message of recycling.

1. Paddlewheel boat made from reused materials 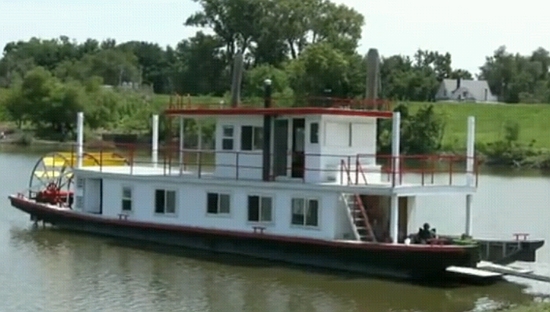 Sobha, which means sunshine in Sanskrit, is the ex-wife of a retired draftsman from the Illinois Department of Transportation, Butch Williams. Sobha is also a paddlewheel boat that he made entirely from reused materials! It is a piece of luxury with a shower, a kitchen, a Jaccuzzi and two wells from which fishing can be done!

The cherry wood that has gone into the boat’s hull comes from the home of an auto dealer from Springfield. The oak wood used is from the home of Butch’s grandmother! The tin roof took its parts from a Beardstown funeral home. This home took a look of the damage fire incident and an Oscar Mayer meatpacking plant discarded the pulleys which the boat uses now.

As if that is not enough, the boat obtains its power using a track engine which was also not in working order before. This GM diesel engine generates a 125 hp thrust for the boat. Another friend from the American Sternwheel Association gave the main components for the paddlewheel. The 74-foot boat took more than 9 years to design and construct and has thrown light on how trash could be resurrected into practical utilities. 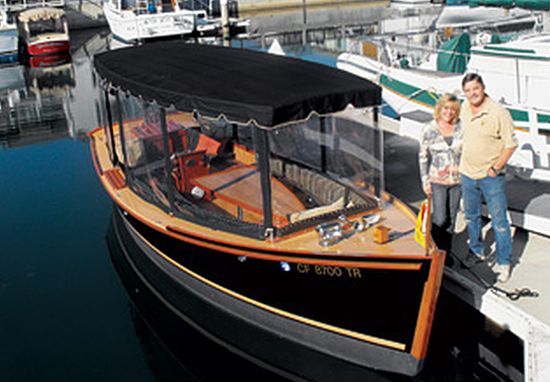 Ray Young, a resident of Southern California, has drawn inspiration from a famous yacht architect and designer, Karl Stambaugh, in designing the Island Queen. The 21-foot boat consists of waste mahogany and it sports bamboo interiors. The boat has a plank hull which consists of painted mahogany joined with construction grade plywood by epoxy. It has no screws or through-hull fittings at all!

Bamboo has been a great natural find! It is durable and since the bamboo grasses grow at a rapid rate, it is renewable too. This sustainable bamboo has been utilized in making the beautiful interiors which are water-proof. The electric motor of the boat is a 48V system with another 12V system in place to handle the dome lights, the running lights, the stereo, the on-board vacuum cleaner and the flashlight. The boat easily cruises with 12 passengers at 6 knots.

3. Bottles Up: The First boat in Fiji 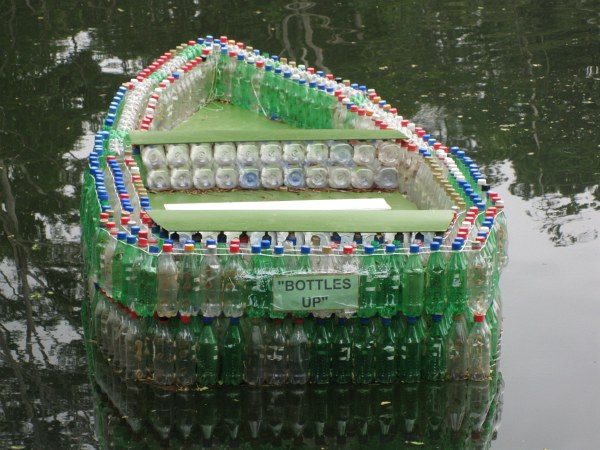 Celebrating the victory of recycling bottles, Bottles Up is a small and cute boat owned by the employees of the Rain Tree Lodge in Fiji. It is special because it has been constituted entirely by plastic bottles (that would have otherwise gone into landfills) and a layer of foam held together strongly by glue. The owner of the eco backpacker’s hotel on Viti Levu island in Fiji claims that this is the first such boat in Fiji. That statement gladdens the heart that there are other such boats around the world too!

Modular sections have been made on the boat using plastic bottles and plastic sheets have been used to compose the floor, deck and seats. Not satisfied with this contribution alone, the employees of the hotel are planning a similar floating platform to ferry the farmer’s crops downriver. The idea is to popularize the use of such boats and cut down the number of discarded plastic bottles in the country. 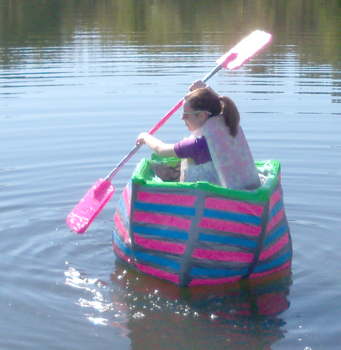 What better way to popularize recycling and reuse than to make the next generation imbibe them? That is exactly what Prof. Neil Lawley did in his 3D designing class. He gave individual assignments to make life jackets out of waste. Furthermore, he had group assignments to make boats of the same materials. And the students came out in flying colors or floating colors shall we say?

The Jabber Jaw is one such boat created from plastic wastes. The paddle has been made of discarded PVC. Looking at the boat nobody will be able to identify them as erstwhile wastes! They have spruced up and well decorated to exude charm. Since they were all DIY projects, the students are pretty excited about test-sailing them. The same excitement has rubbed off towards the idea of recycling too. And that augurs well for the future.

5. Plastic-bottles boat to make a voyage for a cause 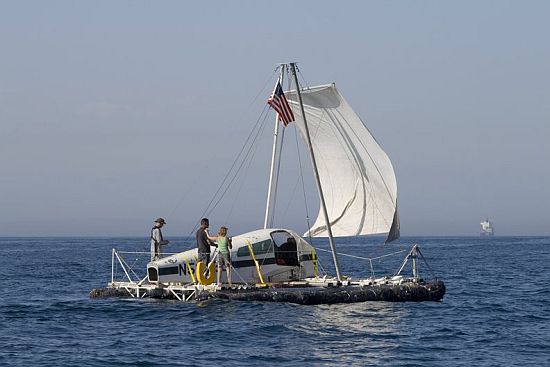 In what could be termed as sailing for a cause, a raft constituted by over 15,000 plastic bottles bound together by a fishing net started off from Long Beach, California, to its destination in Hawaii. It sends a message that humanity need to ‘net’ plastic bottles and not fishes! The boat frame is made of old aluminum spars. In addition, the makeshift cockpit is a discarded fuselage of an old plane. Measuring 30 feet by 20 feet the boat has already drawn public attention.

The voyage will be making was originally slated for three weeks. However, the crew is carrying provisions enough for three months! The raft is sturdy and has been built to withstand the winds and tempests at sea. But the greatest fears of the crew lie in a collision which the boat may not be able to withstand.