There are a couple of ways that you can react when you come head on with adversity. Either you can withdraw into a shell and make your own life and those of others around you miserable or take it up as a challenge and try and overcome it. Of course, swimming against the tide is easier said than done, but it is not impossible. Pete Golsby felt distraught about 12 years ago, when he was told that he was going to be clinically blind due to an immune system problem. But that did not stop him from taking on his disability as a challenge as he went on to do something that most of us might not be able to do. 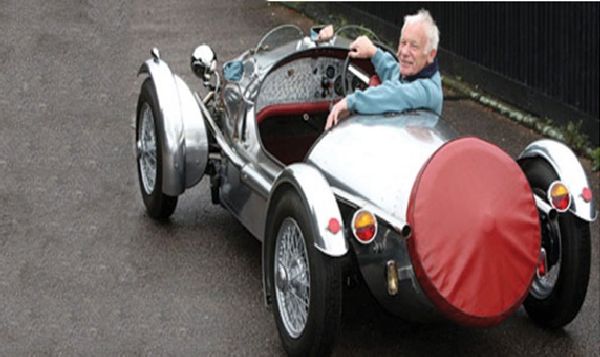 Golsby always wanted to build his own car, but he never had the time to do so. And when suddenly he had lot of free time on his hand, he decided to not worry about the limitations set by his sight and went about trying to build his own car. And obviously it was not easy, but by using magnifiers and visual aids and with constant aid from his supportive wife, he pieced together a silver Pembleton Brooklands sports car. And the best part is that he built the car using mostly old auto parts, some pipes that he took from on old shower and car parts that were donated by his friends.

He used a discarded motorbike engine and with most of the other parts coming from used cars which most likely would have ended up in scrap had it not been for Golsby, the car is a glorious example of how reusing materials can produce amazing results. All you need to have is the will to get things accomplished and an ability to get things done. While his sight might be limited, Pete Golsby has a better vision than most of us.