Two years from now and the city of Sochi in Russia will be hosting the Winter Olympics, 2014. During the event you might witness the marvel of artificial clouds, designed by Asadov Architecture Studio. It was originally conceptualized for the Aerostatic Architecture Competition in 2010, and now may see the light as modular clouds floating through Olympic city. 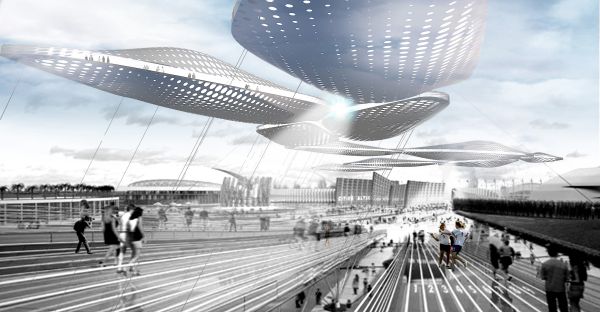 The underlying technology of the project is based on a universal system of modules that can cluster and separate at great heights. The basic structure of the clouds is supported by an aluminum chassis fitted by a membrane fabric. For stable vertical movement, the clouds have been rigidly connected with one another.

The lower parts of the modules are set with rain funnels, which accumulate moisture and can be made to pour down as rain. The top layer is integrated with solar elements, which will harness solar energy that can be used for illumination as well as for life support.

The excitement over the several scenarios that will put the clouds to different uses is rather prominent. They can be used for covering the park ways or accommodating VIPs in the mountain ski areas, etc. Once the Olympic are done with, the ‘clouds’ can be used over streets as canopy’s for various festivals, remaining integral to entertainment in the city of Sochi.