The whole world is becoming environmentally conscious. We know that we are causing immense damage to our planet due to our careless ways of using the resources. Transportation is also witnessing huge changes in its approach towards designing eco-friendly transportation for creating sustainable and low emission vehicles. Although we have already seen plenty of wonderful environmentally friendly concept buses, the best is yet to come. If we are able to materialize any of the designs concepts in the article, then our future would be amazing. These designs do not just aim to reduce the damage that we are doing. In addition, they also aim to make a positive contribution to the environment.

From a list of many options available to us, we have selected some of the most promising bus designs for the future. Check out these wonderful environmentally friendly buses concepts. These would surely count among the public transportation systems of the future that would help in protecting our environment. 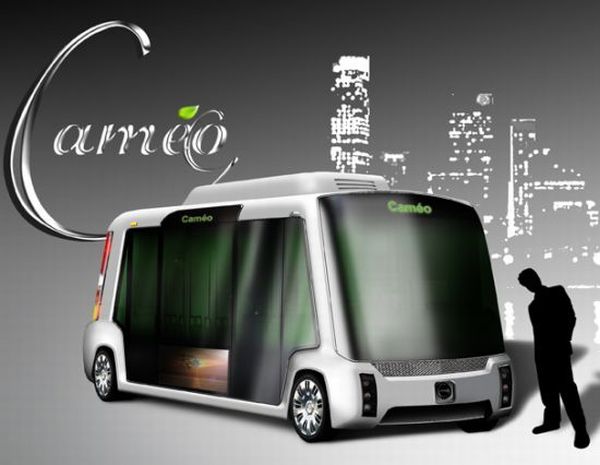 The Cameo is the brainchild of Martin Pes. He is an auto designer who firmly believes in the concept of zero-emission public transportation. This concept not only benefits the environment, moreover, it also manages to transport a good number of passengers without having to come across traffic snarls.

Martin Pes brought this wonder to life in collaboration with the Montreal Society of Transportation, STM. They provide the vehicles with inbuilt ultracapacitors. These make the vehicles faster and easy to recharge. The bus has the capacity of carrying up to 32 passengers and can be recharged at any bus bay within a few seconds. The entrance also makes it possible for wheelchairs to get on board. 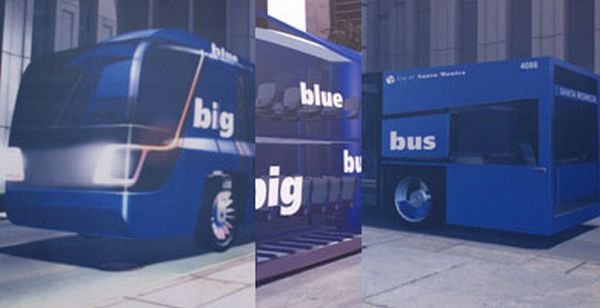 The ‘Bus of the Future’ competition during the Altcar Expo in 2008 saw many innovative entries for creating the Big Blue Bus that would be a new ‘green’ mode of public transportation on the roads of Santa Monica. However, there were three finalists that were picked. All the three finalists had similar-looking designs, but were yet quite different! The ‘Icon Bus’ was the first blue bus finalist entry. Its designs belong to the creative mind of  Gabriel Wartofsky. It bears a close resemblance to the double-decker London bus.

This bus has a green design that releases positive emissions and utilizes sequestered CO2 and also provides an expansive vista of the city through its big windows.

The second design was by Giuseppe Filippone. He called it Cougar Bus, which has a very sleek feline design. One can utilize the individual pods of this bus depending upon the number of passengers. The Cougar Bus is not only space efficient but fuel efficient too. The third model is called the Clear Volume Bus and has been designed by Mike Peterson. 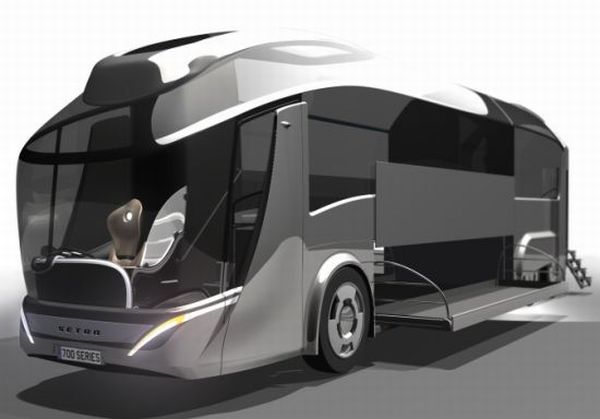 The Setra Coach owes its design to Peter Spriggs. He brought it to reality in collaboration with Adam Cunningham and Adrian Barron. The project was actually just a project. However, it was later that it took the shape eco-friendly public transport vehicle design that can provide all (including the physically handicapped) a comfortable and ‘green’ drive. The bus has a durable and strong superstructure with big windows that offer a great panoramic view. The bus is powered by Lithium-ion batteries. These lie under the luggage compartment. 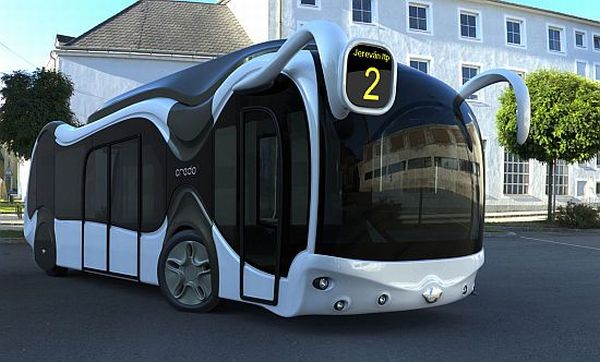 The Credo E-Bone is a bus design by Peter Simon. It is public transportation that works on lithium batteries and hydrogen fuel cells. This futuristic green transportation is a zero-emission one with four in-wheel electric motors whose power source is located on the roof of the bus. The bus has a bone-like structure. It consists of composite plastic that makes it lightweight as well. 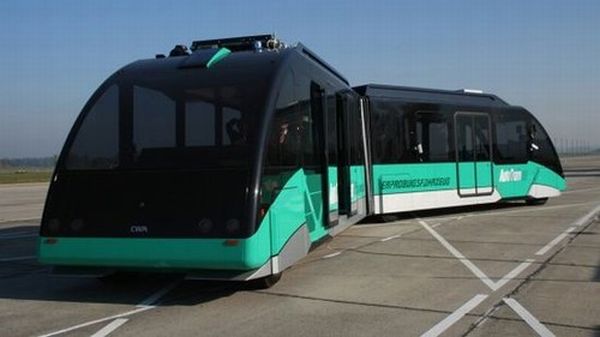 The AutoTram is the creation of the Fraunhofer System Research. This is a futuristic public transportation design that would give its passengers an emissions-free ride. This grand project would have the design of a tram but the flexibility of a bus. The AutoTram is powered by Lithium-ion batteries and does not need the overhead wiring system and rails like the regular tram. 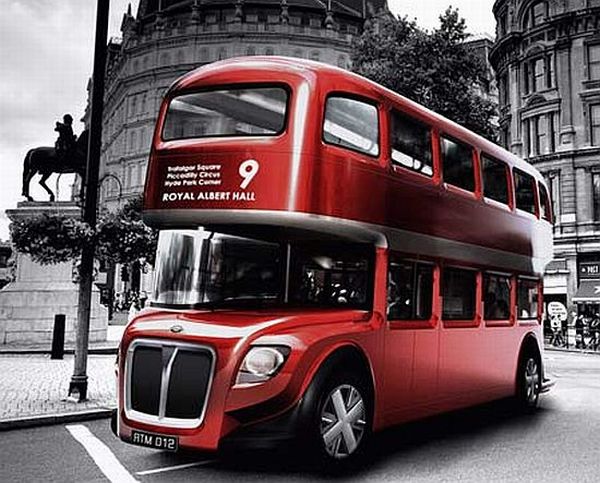 ‘Welcome Back’ is the name of the first runner up in the competition for the New Bus For London that has been designed by the Hector Serrrano Studio. The designers have incorporated a highly technical low emission solution to the traditional-looking London bus by incorporating a hybrid diesel-electric engine that would ensure minimal emissions. The size of the bus is small and compact, so as to make is easy for maneuvering it through the busy London streets. 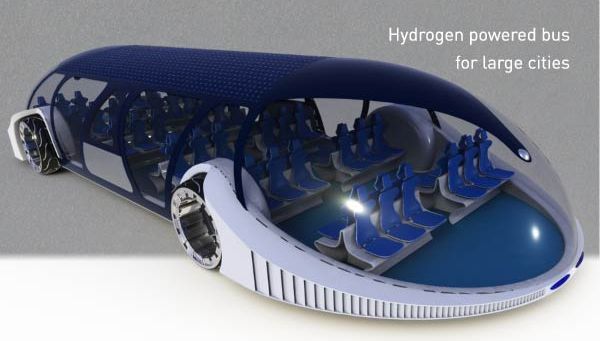 The SKhy bus is an innovative concept bus that is extremely eco-friendly and technologically advanced. The bus derives its energy from the solar photovoltaic cells that are located on the roof of the bus. The bus does not release any carbon monoxide by-products or other toxic fumes and also processes wastewater in order to produce hydrogen, which makes it more efficient. The clean water that would be released by the hydrogen engine would be put to other use. The bus would use its own energy for producing oxygen. The bus would also have a CO2 trapping system that would function for fire extinguishing and cooling purposes too. Designed by Alain Monteiro, the SKhy bus structure would be made out of aluminum and other recyclable materials. The bus would require no driver and would be remotely controlled through sensors and GPS. 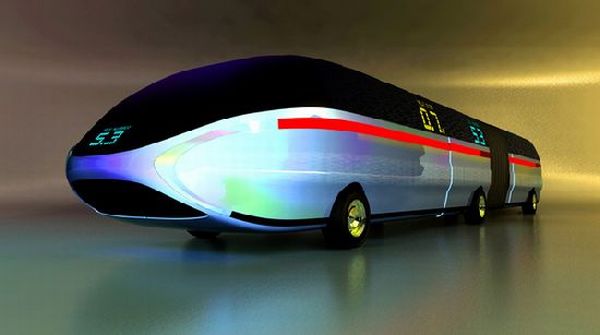 Takht Lahori was an entry to the Instituto Europeo di Design’s School of Transportation Design “My City” scholarship competition and is the brainchild of Ali Murtaza from Pakistan. The design boasts of eco-friendly features such as zero-emission that would provide a safe and fast means of public transportation in the bustling city of Lahore. The green transportation is powered by Lithium-ion batteries that are located inside the wheels and can be charged by using the A/C plug or photovoltaic panels. 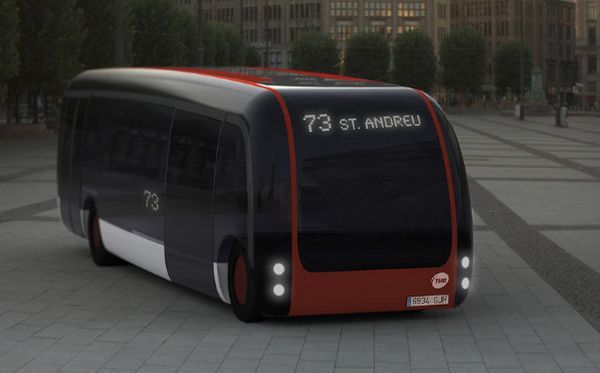 Designed by Francesc Gasch, the B2us is a hybrid powered bus that is an eco-friendly low emission transport for plying on the roads of Barcelona. The outer structure of the bus is very clean with curved corners and the inside of the bus has innovative energy-efficient features. Since the transmission is hybrid, part of the power would be sourced from solar energy via the solar panels installed on the roof of the bus. The B2us will use OLED (Organic LED) technology, which would provide the passenger with information regarding the seat availability and present location of the bus.

One of the popular sustainable buses, this solar-powered public bus is a great solution for the ever-increasing road traffic. The bus, which is also known as a 3D Express Coach is being developed by the Shenzhen Huashi Future Parking Equipment company that has developed a design that would allow cars less than two meters in height to travel under the vehicle! Furthermore, it would be a hybrid design and would run on both solar energy and electricity. The bus would have a speed of around 60 km per hour with a seating capacity of 1200 to 1400 passengers. The construction of the track for this transport would take only one year!