Cities are getting decorated with fancy buildings that have consumed a lot of green cover. These concrete buildings have disturbed natural habitats that has a negative impact on birds and animals. New York is known for its skyscrapers, which have become an identity of the city. But, have we ever contemplated the affect it has on birds that are dying at a fast pace in the New York City? Stone Design, an architecture studio in New York, found out the real reason behind increase in death rate and came up with the Urban Aviary. 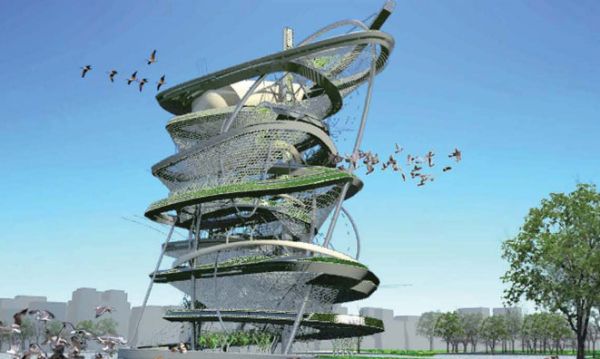 Skyscrapers are very tall buildings that almost touch the sky. Most of them have a glass facade, which confuses these flying creatures. Birds picture these reflective glass surfaces as the reflection of the sky and consider these as the real sky. The result is they get injured and even die after colliding into these skyscrapers, which reduces their population in turn. Urban Aviary is great solution that will offer a house for birds and will also bring down the death rate.

Urban Aviary will be located in Central Park, New York, USA and will be as tall as the Time Warner building standing at 1,050,000 square feet. It will let birds build nests because of the presence of vegetation and food inside the structure. A strong beam of light will help attract birds and provide a safe habitat in one of the most populous cities of United States.

It will prove to be a new typology of skyscrapers, which will have a free form structural system. This free form will help create a forest like environment that will be comfortable for birds as they can relate to such a setup. Water will be produced inside the structure because of the presence of a unique ecological system. Urban Aviary is a great idea that won’t have a facade or flat floor plates. It will house birds and provide everything required for their existence.