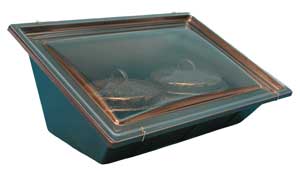 Did you know that the manner in which you eat is one of the major factors that greatly affect the carbon footprint? A considerable amount of energy is required to produce the goods that are taken home by you from the grocery. Apart from that, the way in which these products are cooked by you may also be harmful for the environment. The majority of households tend to use electric stoves or gas ovens that consume large amounts of fuel. People cannot put a stop to cooking so the only way to deal with this problem is to adopt one of the several green cooking choices that can now be found in the market, such as the solar oven.

Those who are interesting in taking part in saving the environment can purchase one of these appliances that have experienced a steady growth in popularity. Commonly called box cookers, these kinds of box-shaped ovens are thermally insulated so that they are able to heat up to about 300 F. They possess glass or plastic tops that ensure that the convection is lessened. The sides are sometimes lined with reflective panels like foil while the bottom is often covered black. The box itself along with the interior portion must be insulated in a proper manner to prevent any kind of melting from taking place.

A solar oven focuses its attention on sunlight, mainly with the help of a reflective layer which happens to be angled in the direction of the inside of the box to start cooking the food. The light undergoes conversion to become heat which is then trapped within the confines of the box with the aid of the insulated walls present in the cooker. You should try and make use of black pans and pots in order to cook since they can contain heat. The ideal time for using a solar oven is during the noon when the sun is at the highest point in the sky. However, one of the major drawbacks of this kind of oven is that it cannot be used to prepare all kinds of food. Due to a fixed limit on how high the temperature can get, you should to prepare recipes in the solar cooker that contain lots of moisture.

Solar cooking technology has helped diminish harmful emissions along with the use of non-renewable resources. They have provided people in underdeveloped countries with an option for preparing healthy and warm dishes. The technology being portable and safer can be transported to villages quite easily. Food cannot be burned down if left unattended due to the ability of the oven to reach only a certain high temperature. Water can also be boiled effectively using this useful appliance.