A new study has shown that emperor penguins are twice as many in number than previously thought. Scientists have been using a new modus operandi in order to conduct the first penguin census from space. They used satellite mapping technology and the results have provided an important standard for observing the impact of environmental change on the population of emperor penguins. 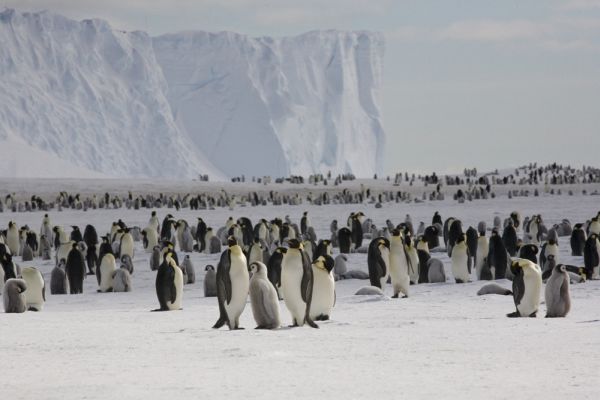 The international team of scientists described how they used VHR or Very High Resolution images to take an educated guess at the number of emperor penguins in each colony in and around the coastline of the Antarctic. They used a system called pan sharpening to boost the resolution of the satellite images and were able to distinguish between ice, shadows, birds and penguin excrement. Then they utilized aerial photography and ground counts to adjust their study since the birds breed in places that are remote and mostly unapproachable with temperatures of 58 degrees Fahrenheit.

Experts managed to find and identify 595,000 emperor penguins, a number that’s double the previously made estimate of 270,000 to 350,000. It’s the first census of any species taken from outer space and the scientists are notably pleased with the method implemented to conduct the research. This is a huge step in studying Antarctic ecology since the methods used were safe and posed little or no environmental impact.

While the research has given us a more comprehensive insight into penguin populations, it has also fueled confirmation that penguin colonies will be seriously affected by climatic change. Concerns are being raised that in many regions of Antarctica, early spring warming is leading to a loss of habitat for the birds and making their northerly colonies more defenseless against global warming.

The research conducted is a partnership between University of Minnesota/National Science Foundation, Australian Antarctic Division, British Antarctic Survey and Scripps Institution of Oceanography.