With the big strides of green technology covering the recent years, we have come across some fascinatingly innovative concepts. But there are few even among them that have that essence of adroit practicality combined with inherent credibility. In simpler terms, these seldom conceptions have the potential to appeal to the common man, and benefit him on a large scale. In relation to this, in our book the intriguing yet uncomplicated piezoelectric energy harvester certainly falls under this exalted category. According to industrial designer Benjamin Wright, the project entails the usage of emerging materials to efficiently contrive a sustainable and efficacious end product. 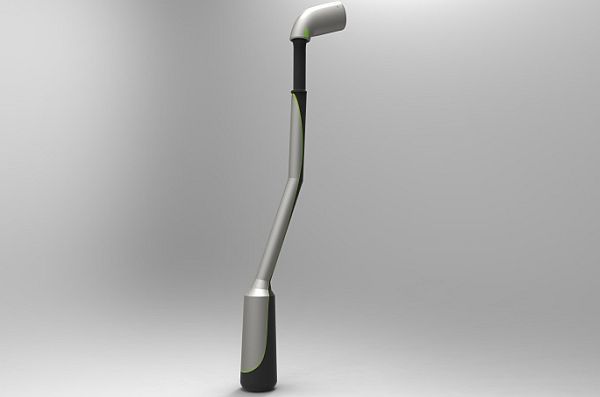 The overall endeavor hinges upon the design of a simplistic device to assist farmers in Afghanistan during wheat production. Looking somewhat like a slightly bent golf club, the harvester will basically consist of two components. The very upper part of the contraption will come in detachable segments. These segments (like a tubular projection) can be affixed to the harvester stick in preference to the functionality the farmer is going to apply. For example, they can be fixed so that the device itself could be used for sylvan functions such as threshing and grain pounding.

The upper tubular component in turn will be connected to the electricity generating system (shown in the picture, as the black component in the upper part). In relation to this, the overall mechanics involves the generation of piezoelectricity (the charge which accumulates in response to certain mechanical stress). In this case, the mechanical stress involves the pounding and threshing functions. Hence, a certain quantity of power is harvested, every time the device is used in the wheat fields.

Finally, we come to the lower part, and this is where the battery would be installed. All of the energy, that is produced from farming functions, will be transferred to this battery pack. Quite adroitly, the stored energy can then be later used for various other functions.