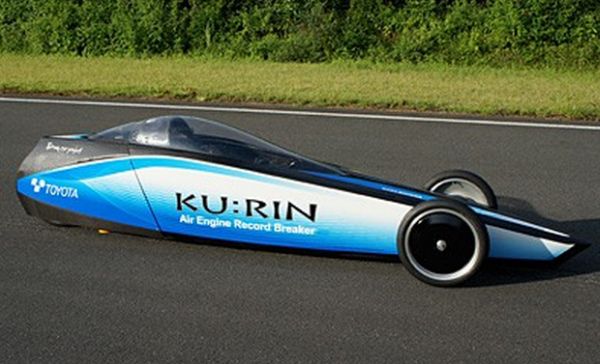 Powered by compressed air and developed by Toyota Motors, the picture that you are seeing is the three-wheeler Ku:Rin, which shows the expertise of the company in the manufacturing of compressors for automotive air conditioning systems. The prototype car that looks like a steam punk vehicle is entirely powered by air. On a test run in Japan Automobile Research Institute that happened on September 9, it posted a speed that intended Toyota to apply for Guinness World Record for the fastest car driven by a compressed air-engine.

In addition to making automobiles, electronic and engine components, Toyota is the world’s largest manufacturer of air-condition compressors producing more than 20 million compressors for car air conditioners. Therefore, you can easily expect something innovative like Ku:Rin from the company.

The car designed by the Toyota Industries looks like an arrows but able to do better things than that. It was designed and built by a team of 40 members at Dream Car Workshop that was started in December 2006 in Toyota Industries Corporation. According to the company, this is the first car to run on the air inflated by a compressor.

The vehicle is also described as eco-friendly tricycle and pencil shaped rocket. The media that viewed the car at the factory in Aichi Prefecture gave these names. By the way, the original name Ku:Rin is derived from the Japanese word for air (ku) and wheel (rin).

This is an eco-friendly car with zero carbon emission because it uses air to propel itself. By doing this, it gives yet another mode of eco-friendly mode of transport. Apart from that, it can save the natural resources like the petrol, natural gas and diesel by utilizing the air.

The power to the car comes from a reversed AC compressor that generates electricity by expanding the compressed air and the on-board compressed air tank works as the “fuel.” The compressed air works like the steam in the steam engine, expanding and driving the pistons to move the vehicle. The air is not a fuel, we all know that, but it acts as a battery pack in an electric car.

The vehicle can move two-miles at a stretch with a top speed of 80mph. This is just the starting of a new technology, you can expect better in the future.

The car runs only on air, it does not use any other fuel like petrol or hydrogen, not even electricity. The model is very sleek and most important Eco-friendly. Apart from that, it is the fastest vehicle running on air alone and that will be registered in the Guinness World Record very soon.

The problem and marketable barrier with this car is like the battery-powered cars, that is range. The total range of only two miles (3.2 km) is laughable. It can only run for this much before it goes out of steam. That means, start the car, reach the top speed and run out of the power. We can understand that the thing is very fast but if you talk about the range, it stands nowhere. The range is an issue due to the low energy density of the compressed air.

Right now, the car is unlikely to see the production. One of the developing members Kenta Nakauchi confirms the same by saying that they are not planning to put the car in practical use, but want to try their expertise to design more unique and eco-friendly cars. So, you will not see any air powered Toyota car near your showroom very soon, this is just a proof of the concept. However, in future you will be able to buy a car that will be partially powered by air.

Physorg says: The Ku:Rin is yet another attempt to explore environmentally friendly modes of transport.

Inflextrust says: The Ku:Rin’s posted top speed of 80.3 miles per hour should be enough to rocket it into the record books.