As new details emerge about Apple’s proposed campus in Cupertino, it becomes increasingly evident that the structure will be nothing short of awe-inspiring. The spaceship campus, a name it gets for its shape, is mammoth in terms all the parameters one can think of. The structure is in some way intended to lend the perfection as is evident in Apple products to the workplace where these products are designed and worked upon. It is in sync with the kind of precision Steve Jobs sought in Apple products. The sheer scale of the numbers marks the rising of a new megastructure on the horizon. 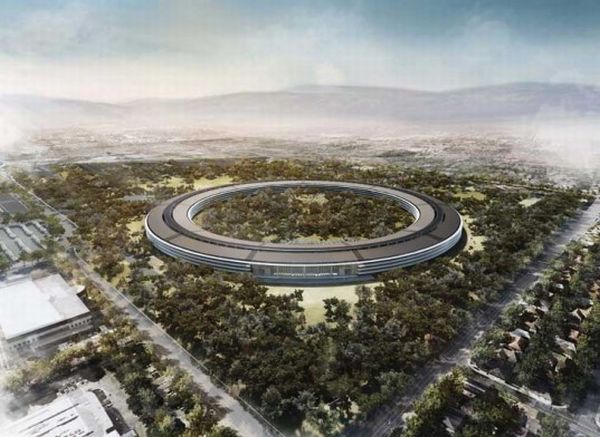 What makes it mega?

A closer look gives a deeper insight into the aspects that affirm the status of Apple’s proposed campus in Cupertino as a megastructure. The campus will be spread out over an area of a whopping 2.65 million square feet. The solar roof of the proposed campus is estimated to generate 5 MW of power. The intricately designed, circular structure is meant to make space for nearly 13,000 employees. Perhaps a bit idiosyncratic, but the circular structure ensures that the glass used around the entire structure is curved. This is a peculiar feature. More than six thousand trees will be at the core of the circular structure that will take half a billion dollars for completion.

The behemoth to be constructed in Cupertino, California, has been designed by the firm Foster and Partners. The architectural firm, based in London, is widely acclaimed. The Hong Kong International airport and the British Museum bear a testimony to the excellent quality of their work. ARUP and Kier & Wright are also a part of the team handling the design process.

Conservative estimates peg the number to be $500 million. There is every likelihood of it being more.

The commercial building will be the second campus for Apple in Cupertino. 13,000 employees will report to this campus once the structure completes. The master plan for the building envisages that only twenty percent of the facility would be the built up area, the rest eighty percent will be covered by greenery. The roof of the entire structure will carry solar panels. The built up area will accommodate a R&D park, a fitness facility and an auditorium to seat a thousand people. The multilevel parking system with solar panels on the roof helps increase the area under the solar panel coverage while reducing the asphalt usage at the same time. The plant will generate its own power, through renewable and non-renewable means, with the grid acting as a secondary option in case of a hitch.

The whole campus will cover an area of approximately 2.65 million square feet.

The construction process for the structure will start rolling in 2012. It will be open to welcome the new occupants by 2012.

The project is impressive with its credentials on the ecological front. There are multiple reasons for the same.

The roof of the entire structure, around 50,000 square feet in area, would carry solar panels for producing energy. This, in combination with the energy produced from natural gas will supply the entire office space with the power needed. The power from the grid would act as an alternative in case the in-house supply fails. Solar energy producing capacity of the structure would be nearly 5 MW. This would undoubtedly put it in the same league as the most effective solar power producing corporate structures. It would be comparable to the best facilities for the purpose not just in USA but the world. The energy generation process for the megastructure will not pollute the environment.

The space being designated for tree plantation is four times the area the built up structure would occupy. This would mark an increase of 60 percent above the existing number. The campus seeks to provide for green spaces for its employees to relax post a grilling session at work.

It is also believed that the asphalt for the plot will see a reduction of about ninety percent from the current levels. Apple is trying to allay apprehensions concerning the impact of the new campus on the traffic and the air the city. Furthermore, people are seeking clear answers on the kind of effect the construction process for the green megastructure will have on the city. The city council is carrying out an impact analysis. The provision for solar power generation and the space reserved for greenery is likely to ensure that none of the issues prove to be a spanner in the works.