Cars have always been energy consumers. The idea that they can also be a source of energy may not go well with many. However, it has always been theoretically possible because energy consumed by a car is actually converted into other form. Most of them are also wasted.

We have not been able to capture this energy in the absence of a proper mechanism. But researchers have now developed methods that can actually make your car an energy producer . Such technologies may kick start an era of self-powering cars in near future. The electricity so produced could also be used for powering traffic signals, LCD display solar controllers ,street lights etc.

Conventional fuels have two disadvantages. First, they release green house gases and aid the process of climate change. Second, their prices are continuously touching new highs. This causes serious dent into a household’s economy. All these call for a switch over to renewable sources of power to ensure a sustainable future. 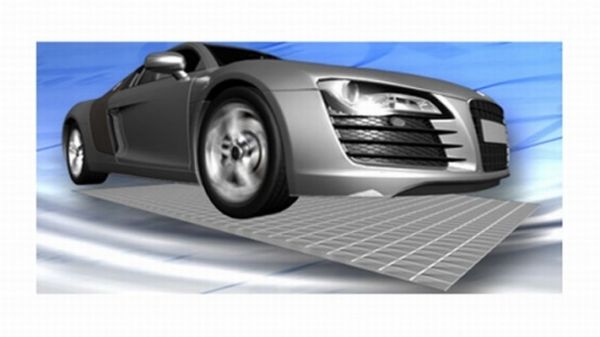 Developed by New Energy Technologies Inc., MotionPower system can capture the kinetic energy produced by vehicles during their movement and convert it into usable electricity. The company aims to install the system at various high traffic locations. It can be customized according to on site conditions for maximum output. According to New Energy, the system can be easily installed, manufactured and is resistant to damages caused by vehicles, weather and road debris.

It has been anticipating that the installation of the new system would allow to replace the conventional electricity connections for powering roadway signs, street lights etc. with a clean and green source of energy. The extra eletricity so produced could also be stored and supplied to households.

The total costs associated with the installation of the new system is still unknown. It can be, however, anticipated to be extremely high. Also, it would take years for realizing the new system as researchers are still developing a more efficient prototype of the system.

Israeli company Innowattech has developed this technology to capture the energy produced during the movement of vehicles on roads and rails with the help of piezoelectric generators. The generators convert mechancial stress produced during the movement of vehicles over piezoelectric materials into electric current. The company has developed three different versions of Innowattech Piezo Electric Generator (IPEG). One each for railways, roadways and runways. All of them would together harvest energy from variations in weight, motion, automatically operated solar regulators ,vibration and temperature during normal movement of humans and vehicles.

The new technology would allow in recapturing some of the energy wasted during the movement of people and vehicles. The energy so produced could be used for powering many electronic systems in cars, trains and on roadways. This will reduce cost and environment burdens associated with traveling.

Only a small amount of energy could be produced from this method. Also, it would require a lot of resources for installing IPEGs on a large scale. Both of these shortcomings might discourage governments from adopting this technology.

Regenerative suspension system can capture the vibrations produced during the movement of a vehicle and convert into usable electricity. Developed by students of the State University of New York, this new technology is in the form of regenerating shock absorber with two tube like components. The smaller magnetic tube slides inside a larger hollow coil tube made of copper. The coil tube moves relative to the magnetic tube because of the vibrations caused by suspension system of the car. The movement of copper coil in the magnetic field produces electricity which can be further used for recharging car’s batteries.

The new system will reduce the dependence of car owners on conventional fuels for recharging the batteries. This will make driving cheaper and an environment friendly activity in the long run.

The amount of energy produced by the prototype is very low. At present, a 1:2 scale prototypeof the technology produces 2-8 W power during common driving conditions when a car is moving at a speed of 45 mph. However, students are expecting to produce upto 256W of electricity from a full scale prototype of the system.

Five futuristic rescue systems that are green too