The need for emission free travel

When the first automobile was successfully developed in the 19th century, the world rejoiced for at long last people could get around long distances in relative comfort and speed. Over the years, we’ve seen automobiles taking different shapes and forms, turning more luxurious, more powerful and so fast that they can even race against a jet on ground (note the Lamborghini Reventon). But with this success has come a host of problems.

Pollution levels are nearing their peak, road accidents are increasing, fuel resources are depleting, health ailments caused by pollution are on the rise, gas prices have soared and we’re witnessing global warming caused in part by vehicular pollution. Since travel is an essential part of our existence, we do need vehicles to ferry us around. The trick is to develop transportation that doesn’t emit carbon fumes and are cheap enough so people can afford them. Though EVs offer us a solution, they do nothing to ease congestion and prevent road accidents. At times, it appears that the only truly safe and eco friendly means of transport is to foot it.

The problem with bicycles

The invention of the bicycle saw people replacing horses with this cheap mode of transportation. You could ride short distances in relative comfort, maintenance was low and you didn’t have to shell out cash for fuel. Today, many countries still give importance to this old form of getting around by encouraging their citizens to ride and not drive, building bicycle lanes that don’t intrude onto lanes occupied by cars, and allowing people to buy bikes tax-free. But the humble and useful bike isn’t without its own share of problems. If you live in an area with rough terrain and aren’t exactly fit enough, your bike will serve you little purpose. Not to mention, elderly folk can find it troublesome to lug around bikes, searching for a place to park. Excessive cycling (especially when standing up) can also cause ailments like knee damage. And if you need to take a bus for a longer commute, you probably won’t be allowed to take your bike in.

The introduction of folding bicycles seems to have changed the scenario to a degree. Since bikes can be turned into compact equipment once folded, they can be carried around so you don’t need to search for a parking space or wheel it wherever you go. Moreover, public transport systems usually allow people to take in their folding bikes. And if you can purchase one that’s electric-powered, you’ll be able to get around more easily and won’t need to exert yourself too much. This isn’t to say that you need to forego your car entirely, but if you need to travel short distances, using your bike can greatly help you save fuel and promote good health. 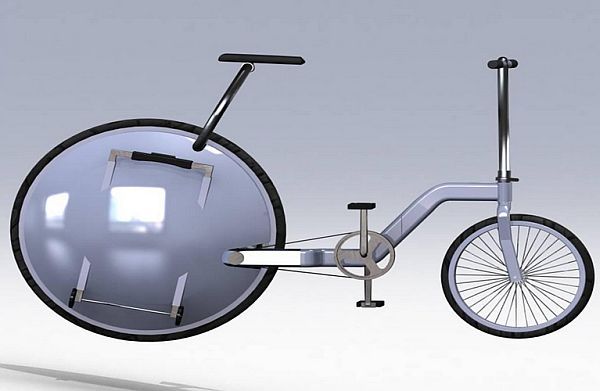 The Smartie Bike is a novel means of transportation that can be easily folded and placed into a neat case. A ring frame at the rear lets the front of the bike and seat rotate, thereby allowing it to be folded. Instead of a chain, there’s a belt drive so you don’t get yourself dirty while riding. Still in the prototype stage, the Smartie Bike comes fitted with brake levers, lights, latches, mudguards and hub gear. 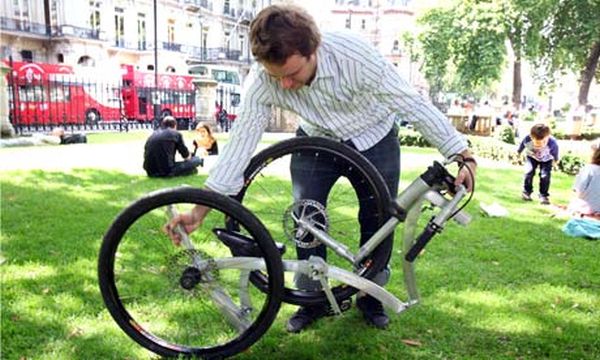 Dominic Hargreaves is the brains behind Contortionis, a prototype folding bike that features an unusually shaped frame. The chainless bike sports big mountain bike wheels and an internal hydraulic system that uses oil to power the rear wheels. Hargreaves also claims that the collapsible cycle can be ridden off road and can be towed along rather than carried. 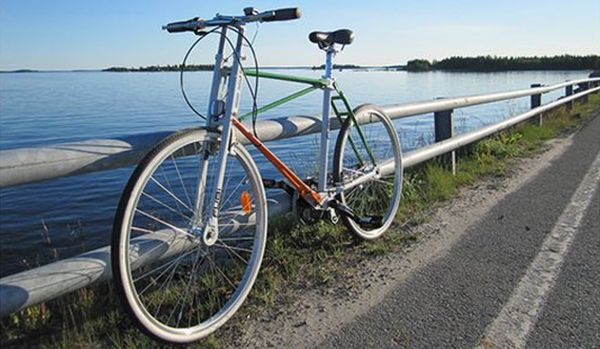 Ulf Laxström has designed a folding bike that can be easily stored while still retaining the styling of a conventional bicycle. Called ‘Fubi’ or ‘future bike’, the contraption can be collapsed to fit inside a golf bag. The prototype measures 26 inches though Laxström hopes to be able to make it in different sizes.

Cannondale’s folding concept bike called ‘On’ sports single front and rear forks that help reduce the weight of the bike while the rear chain case supports the suspension and the wheel. Also fitted are disc brakes and a 9-speed SRAM hub gear. 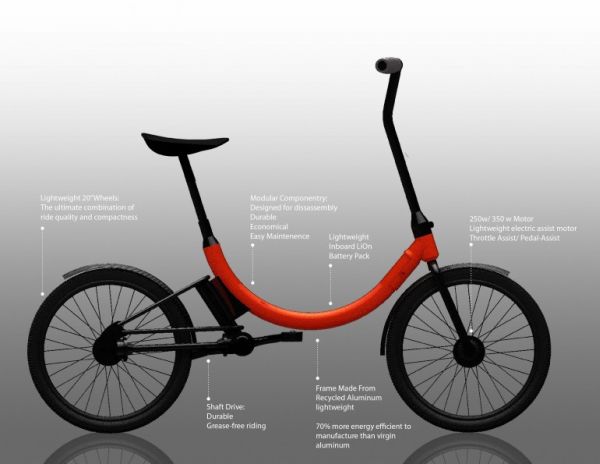 Designer Gabriel Wartofsky’s folding e-bike concept is due to enter pre-production after being taken on countless test rides. The e-bike features a 250W hub motor that delivers 15 mph electric assist while a lithium-ion battery pack produces 10-15 miles between charges. The designer is also working on another prototype that will feature a 350W motor and batteries that deliver a 15-40 mile range.

Folding bikes could just pave the way for future modes of transportation. At the rate we’re going, it appears that we’re slowly moving back in time, having to depend on equipment and devices that were once used years back. The portability of folding bikes, especially those assisted by electric motors and batteries, make them especially feasible for use among people who don’t have the strength or are too old to strain their legs trying to climb uphill. Hopefully, we’ll soon see a world where our health takes a turn for the better, dependence on automobiles is reduced and pollution levels are brought down.