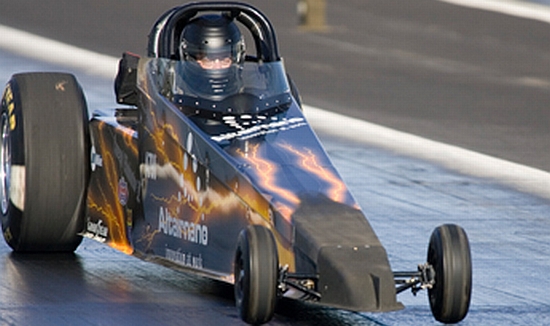 Let me tell you today success story of Dennis “Kilowatt” Berube. It has set a new National Electric Drag Racing Association (NEDRA) electric vehicle world speed record at the Southwestern International Raceway in Tucson, AZ on Sunday, December 30th 2007, driving an electric dragster called Current Eliminator V, powered by Altairnano battery packs. This was the 17th consecutive time that it has held the world record for fastest electric vehicle in a quarter mile.

The race was marked by nail-biting excitement. The conditions for setting the world record include two record-breaking times on the same day under the same conditions. With runs rapidly decreasing in time, Berube began with 9.0 seconds, followed by 8.4, then 8.009 seconds. On the fourth run of the day, Berube broke into the 7-second category reaching 159.65 mph in 7.956 seconds. Dennis then assured his spot in the record book with a consecutive run of 7.963 while reaching 160.65 mph for the quarter mile.

Setting two world records in one month is an impressive feat. With his first record in the electric dragster category and now the record for all electric vehicles, Dennis and Altairnano are pushing the frontier of advanced battery technology in racing vehicles.

Via: The Truth About Cars