Everything I need to know about concentrated photovoltaics

Solar power generation nearly doubled in 2010, reaching 40 GW of installed capacity compared to 23 GW at the end of 2009. This growth was led by Europe installing 13 GW with Germany and Italy being the leading countries. This growth, happening in spite of the global economic slow down, is very heartening for the green power industry.

The predominant photovoltaic technology in use has been the familiar flat panel modules seen installed on roof tops. These use crystalline silicon solar modules. The efficiency of conversion of sunlight into electricity of these modules has been in the 15 to 19 percent range. These modules are, obviously, effective only in the daylight hours. On cloudy and overcast days, the power output falls due to the reduced sunlight falling on the panels. Power output is also low in the early morning and the late afternoon hours, as the sun position is not directly over the solar modules.

The new technology of Concentrated Photo-Voltaics (CPV) is emerging as the solution to these shortcomings of solar photovoltaics. In CPV, a set of mirrors and lenses are used to focus sunlight on the solar cell. The mirrors and lenses also track the position of the sun. The higher incident energy improves conversion efficiencies. CPV technology should add impetus to faster adoption of solar energy. 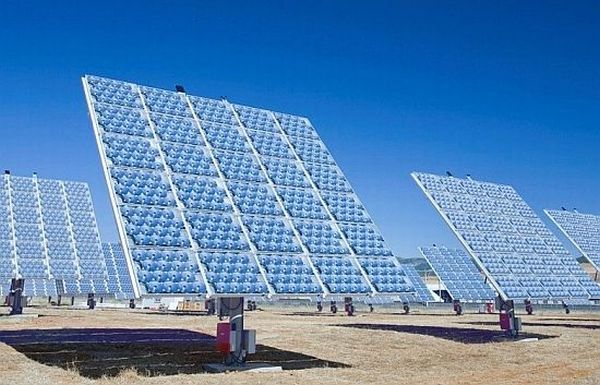 SolFocus of Mountainview, California has won a $ 103 million contract to build a total of 10 MW of CPV power plants at multiple locations in southern Spain. The 10MW is enough to supply 40,000 people with green power. SolFocus already has 10MW of CPV installations working in the island of Crete in Greece and smaller capacity pilot plants in the US.

SolFocus uses a set of mirrors and lenses to concentrate sunlight on the PV modules. A primary mirror captures the sunlight and reflects it onto a secondary mirror. A set of lenses in front of the secondary mirror concentrate the energy 650 times before it falls on the PV module. The PV module is made of multi-junction solar cells, originally developed for space applications. Multi-junction cells use only 1/1000 of the silicon material used in crystalline cells and also have a higher solar conversion efficiency at 26 percent compared to the 15 to 19 percent possible with crystalline silicon.

The PV module and the optics system of mirrors and lenses are mounted on a pivot that is motor operated to track the sun. The tracking system is controlled by a computer program that ensures that the PV module receives the maximum possible solar energy all through the day. With the tracking system, the solar conversion efficiency reaches 40 percent. The large aluminum panel on which the system is assembled, serves as the heat sink to prevent the PV module overheating due to the concentrated solar energy.

The pivoted PV modules are designed for ground mounting and the sun tracking mechanism ensures that the ground is not in permanent shadow. This enables crop cultivation on the ground around the CPV installation. This is important, as a 1 MW CPV installation could need a land area of 6 to 8 acres. 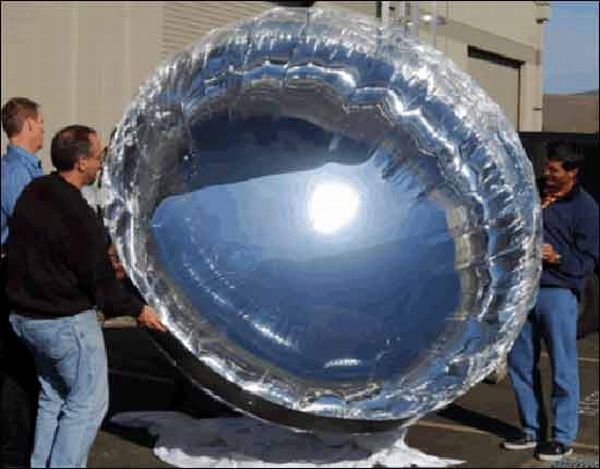 Cool Earth Solar, a Livermore, California start-up company plans to use the CPV system in a balloon floating in the sky. The balloon is made of the plastic PET, the material commonly used in food packaging. The 8 foot diameter balloon has its upper half made of transparent PET to receive the sunlight. The lower half of the balloon is made of reflective plastic, that focuses the sunlight on the solar module located at the center of the balloon. The solar module is positioned by lightweight struts, that also support a cooling water circulation system to keep the solar module from overheating.

The Cool Earth system is still about 2 years from being ready for deployment but the innovative use of plastic film to serve as the solar concentrator lowers the cost. Tethering the balloon in the sky also increases the hours of solar radiation that it can collect. The system also saves on the land area needed. 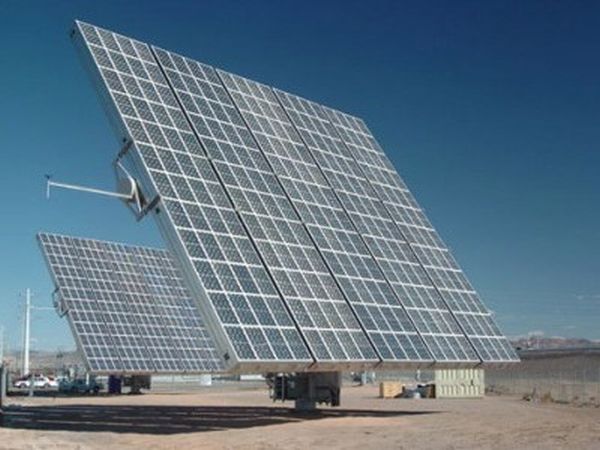 A CPV power project with a capacity of 30 MW is coming up at Alamosa in Colorado. This project will take the CPV technology from the concept stage to a utility scale power plant. The project is being promoted by Cogentrix, a subsidiary of Goldman Sachs. The US Department of Energy has provided a $ 90 million loan guarantee for this project. Amonix of California has been selected as the supplier of CPV systems. The 23.5 meter wide solar panels will use over a 1000 Fresnel lenses on each panel to concentrate the solar energy. The Amonix panels also use the higher efficiency multi-junction solar cells and the sun tracking system similar to the one described for SolFocus above. The CPV panels for the 30 MW capacity will cover a land area of 225 acres.

Amonix has previously commissioned a 5 MW CPV plant in New Mexico and this will be a major step up for their technology.

The cost of mirrors and lenses are estimated to be $ 1 per watt compared to $ 7 – 8 per watt for the current crystalline silicon panels. With conversion efficiencies said to be near 40 percent compared to 15 – 19 percent for current technologies, the use of CPV technology clearly helps reduce overall cost. With CPV technology, the payback period for the installation can be as low as 6 months whereas it is 3 to 4 years with flat panel solar modules.

The additional advantage of freeing up the land for crop cultivation or other uses will also add to the attractiveness of solar power.

The addition of tracking motors and computer controls adds to the complexity of the installation and would need on-site maintenance, which is not needed in fixed solar panel installations.

The CPV is also presently not designed for fitment on building rooftops. One of the suggestions for further improving solar efficiency is to use the heat absorbed by the back panel of the module. In theory, this heat could be used to drive a vapor absorption air conditioning system or to pre-heat the water to be used in the building. Such applications are easier to implement with roof top solar modules.

CPV technology extends the solar conversion efficiency that had appeared to plateau at around 19 percent to a higher level. With flat panel technology, solar power was expected to achieve grid parity with fossil fuel only by 2020 and until then, governments were expected to subsidize photovoltaic power generation. CPV technology should help solar power reach the grid parity goal faster.

Silicon PV cell manufacture is currently concentrated in 3 countries, Japan, China and Taiwan. Facilities in other parts of the world are unable to compete on cost. Japanese manufacturers also appear set to exit this industry. The reduced silicon content with CPV holds promise of revival of fab units in the US and Europe. That should improve supply and stabilize prices which have fluctuated widely in the past 3 to 4 years.